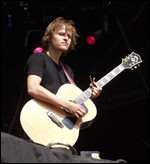 The son of two Church of England vicars,[1] McRae sang in the church choir and as a teen experimented with his mother's guitar.[2] Initially trying to emulate his heroes, Billy Bragg, Bob Dylan, Paul Simon, Neil Young, Kate Bush, U2, he began to write his own songs and develop his own style. Age 18, he went to City of London Polytechnic achieving a degree in politics and government,[3] and forming his first band, "The Ministers of Orgasm". Subsequently, McRae was involved in bands "Raising Cain" and "Orchid Lounge".[4] A chance meeting with recording engineer and record producer Roger Bechirian, (Elvis Costello, Squeeze, Carlene Carter, The Undertones), led to a working relationship. Bechirian helped to shape McRae's soft-spoken sound, which later gained McRae a deal with Dave Bates's db Records, (db/BMG records). In 2000, director Scott Walker chose McRae to perform at the Meltdown Festival in the Royal Festival Hall.[5] McRae's confessional, self-titled debut appeared in autumn 2001, during the height of the new acoustic movement and earned him comparisons to Nick Drake and Bob Dylan. Critics raved and McRae gained nominations for the Mercury Prize, a Q magazine award and the BRIT Award for Best Newcomer. By then, McRae was working with Oliver ("Oli") Kraus, cellist, and in 2003 was joined by Olli Cunningham on keyboards. McRae's second album, Just Like Blood, was released in the UK in February 2003 produced by Ben Hillier, whose credits include Elbow, Martha Wainwright and Blur. McRae then moved to California, where he wrote and recorded his next album, All Maps Welcome, which was released in May 2005.

In 2005, McRae supported Tori Amos on the UK/Ireland leg of her Original Sinsuality tour. Having played many times in the Hotel Café in Los Angeles and having been one of the artists on the first U.S Hotel Cafe Tour, McRae brought the Tour to the UK in 2006, introducing his fans to many other singer-songwriters which most notably included Steve Reynolds, Joe Purdy, Cary Brothers, and Jim Bianco. The Hotel Cafe Tour saw the artists participating in each other's songs. The tour also featured a variety of special guests, including Kathryn Williams, Justin Currie, Colin MacIntyre and Aqualung.

McRae's fourth album, King of Cards, was recorded in Suffolk and released in May 2007.

In spring 2008, McRae once again brought the Hotel Cafe Tour to the UK, and for the first time, also took it to continental Europe. This time he was accompanied by Cary Brothers, Brian Wright, Catherine Feeny, Greg Laswell, Jim Bianco and Jason (or Dr.) Kanakis. Again, there were special guests at each location, including Eddi Reader and Turin Brakes.

McRae was a guest vocalist for the band "Wills and the Willing" at a number of festivals in the UK in summer 2008, and had a headline slot at the Offset festival in August.[6] In autumn 2008, he toured the North Eastern states of America and Canada.

McRae's fifth studio album, The Alphabet of Hurricanes, was produced in his own recording studio, Gunpoint, in East London. The album was recorded over three years in varied settings, and, thanks to a deal with Cooking Vinyl was released in February 2010. The "Alphabet of Hurricanes" Tours, which sold-out at a number of venues, were rescheduled to fit in with the album release.[7] Towards the end of 2010, McRae was involved in the Crossing Border festival in the Netherlands, playing with the Matangi Quartet who are based in that country. He released a second live album, Tom at Tut's with songs and banter garnered from 2 full band gigs at King Tut's Wah Wah Hut in Glasgow in 2004. In the spring of 2011, Tom toured the UK and Europe with a UK string quartet, and did a solo tour in Germany. 2012 saw the arrival of his sixth studio album From the Lowlands, being the long awaited second part of the Alphabet of Hurricanes, and Tom's first solo tour in France, the UK and Ireland which met with sold-out venues. A further leg of the solo tour in April 2013 coincided with a commercial release of "From the Lowlands".

On 7 September 2013, instrumental music composed by Tom was performed as part of a multimedia art installation of video-artist Klaus Verscheure "14 EMOTIONS/Allegoria Via Dolorosa" by the Belgian group Spectra Ensemble at the Transformator/Happening (festival of metamorphosis) in Zwevegem, Belgium.

McRae was once cast in an independent film as Gram Parson's ghost. Funding for the film fell through and all that remains is his screen test.[9]

He also contributed a cover version of "Wonderful Christmastime" to a Christmas compilation album: Maybe This Christmas Tree released in 2004.

In August 2005, McRae visited the country of Niger in Africa at the request of The Observer and wrote an article about the famine titled, "This is not just another act of God - this is ingrained poverty".

McRae provided some of the vocals on "Lipstick", a 2008 single by "Wills and the Willing" having written parts of the song after listening to the original material. The song was written in response to the London bombings.[10]

Along with Bob Harris, Guy Clark and others, McRae is one of the commentators on the film We Dreamed America, released as a DVD in 2008. This documentary examines the connections between British and American roots music.

Use of McRae's songs in film and television

McRae contributed music to the soundtracks of the movies Uno (2004) and Unsuitable (2005). His music also featured in the film The Bubble.

"São Paulo Rain" was featured in a sixth season episode of Buffy the Vampire Slayer. The episode is entitled "Entropy."

"I Ain't Scared of Lightning" was featured in the second season of British drama Skins.

"Karaoke Soul" and "Stronger Than Dirt" appear in the American television series Rescue Me and "Karaoke Soul" is featured in its soundtrack.

"2nd Law" and "You Cut Her Hair" were part of the soundtrack for the film Jekyll + Hyde.

"Walking 2 Hawaii" was used in Hollyoaks

"You Only Disappear" was featured in an episode of the American drama Without a Trace.

"For The Restless" was used in one episode of the German television series Alles was Zählt.

"You Only Disappear" was used for a contemporary routine choreographed by Dee Caspary on Season 7 of So You Think You Can Dance.

"Overthrown" was used in the third season episode "Everyone Leaves" of Six Feet Under.

His cover of Wonderful Christmastime was used in the TV version of film Lost Christmas starring Eddie Izzard but was not used in the DVD version.

This article uses material from the article Tom McRae from the free encyclopedia Wikipedia and it is licensed under the GNU Free Documentation License.