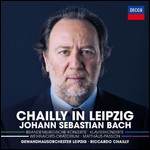 Chailly was born in Milan into a musical family of Romagnol and French descent.[1] He studied composition with his father, Luciano Chailly.[2] His sister is harpist Cecilia Chailly.

Chailly studied at the music conservatories in Perugia and Milan. He later studied conducting with Franco Ferrara. In his youth, Chailly also played the drums in a rhythm-and-blues band.[3]

At age 20, Chailly became assistant conductor to Claudio Abbado at La Scala, where he made his conducting debut in 1978. From 1982 to 1988, Chailly was chief conductor of the Berlin Radio Symphony Orchestra and from 1983 to 1986 principal guest conductor of the London Philharmonic Orchestra. From 1986 to 1993, he led the Teatro Comunale of Bologna.

Chailly made his debut with the Concertgebouw Orchestra, Amsterdam in 1985. From 1988 to 2004, Chailly was chief conductor of the Royal Concertgebouw Orchestra (RCO), where he dedicated himself to performances of the standard symphonic tradition, notably Anton Bruckner and Gustav Mahler, with which the orchestra made its name but also significantly broadened the repertoire with 20th century and contemporary music.[4][5] Among notable projects, Chailly led the 1995 Mahler Festival that celebrated the 100th anniversary of Mahler's first concert at the Concertgebouw. Chailly also conducted opera in Amsterdam, both at the RCO's annual Christmas Matinee concert as well as at De Nederlandse Opera (DNO), where his final opera production in Amsterdam was DNO's staging of Giuseppe Verdi's Don Carlo.[6] One report stated that Chailly decided in 2002 to leave the RCO when, at his last contract negotiations, the orchestra offered him an extension for two years rather than five.[7]

In 1986, Chailly conducted the Gewandhausorchester Leipzig for the first time, at the Salzburg Festival, after Herbert von Karajan had introduced Chailly to the orchestra.[8] His next guest-conducting appearance with the Leipzig orchestra was in 2001, and after an additional appearance, he was named the 19th Kapellmeister of the orchestra.[9][10] In August 2005, he officially became the chief conductor of the Gewandhausorchester Leipzig and general music director (GMD) of Oper Leipzig. His initial Leipzig contract was to run through to 2010.[11] In May 2008, he extended his contract with the Gewandhausorchester to 2015. However, he concurrently resigned as GMD of the Oper Leipzig, reportedly after conflict over the hiring of personnel without his consultation.[12][13] In June 2013, the Gewandhausorchester and Chailly agreed on a further extension of his contract through 2020.[14] However, in September 2015, the Gewandhausorchester announced the newly scheduled conclusion of Chailly's tenure as Gewandhauskapellmeister in June 2016, four years ahead of the previously agreed upon contract extension, at Chailly's request.[15][16][17] His projects in Leipzig have included an international Mahler festival in May 2011, featuring 10 different orchestras.

Chailly has an exclusive recording contract with Decca, and his recordings with Decca include complete cycles of the symphonies of Johannes Brahms, Gustav Mahler and Anton Bruckner. His Brahms cycle with the Gewandhausorchester won the 2014 Gramophone Award for Recording of the Year. Other notable achievements include recordings of Igor Stravinsky, Edgard Varèse and Paul Hindemith. More recently, with the Gewandhaus Orchestra, Chailly has led recordings of Felix Mendelssohn, Johann Sebastian Bach, Brahms, Robert Schumann's symphonies in the re-orchestrations by Mahler, and a complete cycle of Beethoven's symphonies. His past recordings with American orchestras included Shostakovich: The Dance Album with the Philadelphia Orchestra[20] and Stravinsky's Le Sacre du printemps with the Cleveland Orchestra.

Chailly has been married twice. He has a daughter, Luana, by his first marriage to Anahi Carfi, and a stepson from his second and current marriage to Gabriella Terragni.

This article uses material from the article Riccardo Chailly from the free encyclopedia Wikipedia and it is licensed under the GNU Free Documentation License.