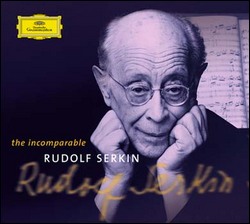 Serkin was born in Eger, Bohemia, Austro-Hungarian Empire (now Cheb, Czech Republic), to a Russian Jewish family. His father, Mordko Serkin, "had been a Russian basso, and taught him to read music before he could read words."[2]

Hailed as a child prodigy,[3] he was sent to Vienna at the age of 9, where he studied piano with Richard Robert and, later, composition with Joseph Marx, making his public debut with the Vienna Philharmonic at 12. From 1918 to 1920 he studied composition with Arnold Schoenberg and participated actively in Schoenberg's Society for the Private Performance of Music. He began a regular concert career in 1920, living in Berlin with the German violinist Adolf Busch and his family, which included a then-3-year-old daughter Irene, whom Serkin would marry 15 years later.

In 1921, at age 17, he made his Berlin debut performing in Busch's ensemble as the keyboard soloist in the Brandenburg Concerto No. 5. At the end of the concert, Busch told Serkin to play an encore to the enthusiastic audience. Serkin later reported that he asked Busch, "What shall I play?" and Busch "as a joke" told him to play the Goldberg Variations "and I took him seriously. When I finished there were only four people left: Adolf Busch, Artur Schnabel, Alfred Einstein and me."[2]

In the 1920s and early 1930s, Serkin performed throughout Europe both as soloist and with Busch and the Busch Quartet. With the rise of Hitler in Germany in 1933, Serkin and the Busches (who were not Jewish but who vehemently opposed the Nazi regime) left Berlin for Basel, Switzerland.

In 1933, Serkin made his first United States appearance at the Coolidge Festival in Washington, D.C., where he performed with Adolf Busch. In 1936, he launched his solo concert career in the US with the New York Philharmonic under Arturo Toscanini. The critics raved, describing him as "an artist of unusual and impressive talents in possession of a crystalline technique, plenty of power, delicacy, and tonal purity." In 1937, Serkin played his first New York City recital at Carnegie Hall.

Emigration to the United States

Shortly after the outbreak of World War II in 1939, the Serkins and Busches immigrated to the United States, where Serkin taught several generations of pianists at the Curtis Institute of Music in Philadelphia. From 1968 to 1976 he served as the Institute's director. He lived with his growing family, first in New York, then in Philadelphia, as well as on a dairy farm in rural Guilford, Vermont. In 1951, Serkin and Adolf Busch founded the Marlboro Music School and Festival in Marlboro, Vermont, with the goal of stimulating interest in and performance of chamber music in the United States. He made numerous recordings from the 1940s into the 1980s, including one at RCA Victor of Beethoven's Piano Concerto No. 4 in 1944, with the NBC Symphony Orchestra conducted by Toscanini. Most of his recordings were made for Columbia Masterworks, although in the 1980s he also recorded for Deutsche Grammophon and Telarc. Serkin admired the music of Max Reger, which he discovered while working with Adolf Busch. In 1959, he became the first pianist in the United States to record Reger's Piano Concerto, Op. 114, with Eugene Ormandy and the Philadelphia Orchestra.

Serkin was awarded the Presidential Medal of Freedom in 1963 and in March 1972 celebrated his 100th appearance with the New York Philharmonic by playing Johannes Brahms' Piano Concerto No. 1. The orchestra and board of directors also named Serkin an honorary member of the New York Philharmonic-Symphony Society, a distinction also conferred on Aaron Copland, Igor Stravinsky, and Paul Hindemith. In 1986, he celebrated his 50th anniversary as a guest artist with the orchestra. He is regarded as one of the primary interpreters of the music of Beethoven in the 20th century.

Revered as a musician's musician, a father figure to a legion of younger players who came to the Marlboro School and Festival, and a pianist of enormous musical integrity, he toured all over the world and continued his solo career and recording activities until illness prevented further work in 1989. He died of cancer on 8 May 1991, aged 88, at home on his Guilford farm.

He and Irene were the parents of seven children (one of whom died in infancy),[4] including pianist Peter Serkin and cellist Judith Serkin.[5] They had fifteen grandchildren, including the composer David Ludwig and the bassoonist Natalya Rose Vrbsky. Irene Busch Serkin died in 1998.

This article uses material from the article Rudolf Serkin from the free encyclopedia Wikipedia and it is licensed under the GNU Free Documentation License.