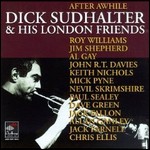 Born in Boston, Massachusetts, Sudhalter was inspired to pursue a musical career by his father Al Sudhalter, a noted Boston-area saxophone soloist. He began playing the cornet at 12 and within a few years was performing professionally. After graduating from Oberlin College, he moved to Europe in 1964, later becoming a United Press International correspondent. In 1968 he covered the Russian invasion of Czechoslovakia from Prague for UPI and was subsequently assigned the role of Manager for Eastern Europe.[2] During his twelve years living in Europe and the UK, he also wrote under the pseudonym "Art Napoleon." He wrote jazz criticism for the New York Post from 1978 to 1984.[1]

In 1974 Sudhalter and Philip R. Evans co-wrote Bix: Man and Legend, the standard biography of jazz cornetist Bix Beiderbecke and the first jazz biography ever to be nominated for a National Book Award. Music critic Terry Teachout has called the book "a 'landmark of jazz scholarship' and the 'first jazz biography written to the standards' of a serious study of a classical composer or other major historical figure."[3] Sudhalter's other books are Lost Chords: White Musicians and Their Contribution to Jazz, 1915-1945 (1999) and Stardust Melody (2002), the first full-length biography of Hoagy Carmichael. Lost Chords ignited some controversy for its assertion that jazz was shaped by both black and white musicians.[4] Sudhalter received an ASCAP Deems Taylor Special Citation for Excellence for Lost Chords, and a Grammy Award in 1983 for his liner notes for Bunny Berigan: Giants of Jazz.

Sudhalter also worked as a professional musician for most of his life, playing trumpet and cornet with the New York Jazz Repertory Company and founding the New Paul Whiteman Band. In 1983 he co-founded the Classic Jazz Quartet, a traditional jazz ensemble that also included Marty Grosz on guitar, Joe Muranyi on clarinet, and Dick Wellstood on piano. In addition to recording with the Classic Jazz Quartet and the New Paul Whiteman Band, he made several solo albums.

A stroke in 2003 forced him to retire from playing, after which he developed multiple system atrophy, a disease that left him unable to speak and subsequently led to his death from pneumonia, aged 69.[5] He was survived by his brother and sister Carol Sudhalter, a NYC-based saxophonist and flutist, two adult daughters, his ex-wife Vivian Sudhalter of 18 years, and his companion Dorothy Kellogg of 22 years.[4]

This article uses material from the article Dick Sudhalter from the free encyclopedia Wikipedia and it is licensed under the GNU Free Documentation License.

Everybody Levin
Update Required To play the media you will need to either update your browser to a recent version or update your Flash plugin.