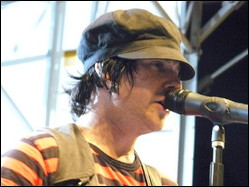 In 1993, lead vocalist Pierre Bouvier and drummer Chuck Comeau were in a band named Reset. In 1998, Comeau left soon after to go to college.[9] In mid 1999, he met with high school friends guitarists Jeff Stinco and Sébastien Lefebvre who were in separate bands of their own, and combined to create Simple Plan.[9] In late 1999, Bouvier and Comeau reacquainted at a Sugar Ray concert[10] and Bouvier left Reset soon after to join Comeau. Bassist and backing vocalist David Desrosiers replaced Bouvier in Reset, but he too left the band six months later to join Simple Plan.[9][10] This allowed Bouvier, who had doubled as the band's lead vocalist and bassist, to concentrate on the singing and Stinco, who had doubled as the band's lead guitarist and backing vocalist, to concentrate on the guitar.

The origin of the band's name is obscure. Band members have given various responses, including that the band was their "simple plan to avoid working at McDonald's", or other fast food restaurant chains. However, the name may be derived from the 1998 film and novel of the same name.[11]

In 2002, Simple Plan released the debut studio album, No Pads, No Helmets...Just Balls, which contained the singles I'm Just a Kid, I'd Do Anything, Addicted, and Perfect. The band was aiming at a pure pop punk record.[12]

The record was originally released in the United States with twelve tracks, ending with "Perfect". Enhanced and foreign editions came in several different versions with up to two additional tracks in addition to the original twelve. Two pop punk singers contributed on vocals: "I'd Do Anything" included vocals by Mark Hoppus from Blink-182, and "You Don't Mean Anything" included vocals by Joel Madden from Good Charlotte.

The years of 2002 and 2003 were very formative for the band Simple Plan. MTV Networks and their parent company, Viacom Inc. featured Addicted from the band's No Pads, No Helmets...Just Balls on one of their top performing shows during the spring of 2003 in the United States and internationally; on MTV and MTVu, and was filmed at the University at Buffalo (SUNY Buffalo) in Western New York. Addicted was the theme song for Fraternity Life. While the show was taken off the air the following season the band continued to rise on the billboard charts in the United States and performances continued to be booked and reruns of the show played around the world.

In 2002, the band also performed and recorded the theme song for a rebooted installment of the Scooby-Doo franchise, What's New, Scooby-Doo?. This show used the band's intro throughout its entire run until its conclusion in 2006. It also featured many of the band's songs within episodes of the show, including "I'd Do Anything".

In 2003, the band played as a headliner on the Vans Warped Tour — an appearance memorialized in the comedy slasher film, Punk Rock Holocaust, in which four of the five band members are killed. The band also played short stints on the Warped Tour in 2004 and 2005. That same year (2003) the band opened for Avril Lavigne on her "Try To Shut Me Up" Tour.[13] In addition to several headlining tours, the band has also opened for Green Day and Good Charlotte.[13] The album had sold one million copies in early 2003 then went on to sell over four million copies worldwide, making it the band's best selling album to date.

In 2004, Simple Plan released its second album, Still Not Getting Any... which was produced by Bob Rock and led to the subsequent singles, "Welcome to My Life", "Shut Up", "Untitled (How Could This Happen to Me?)", "Crazy", and (in some markets) "Perfect World".

According to the bonus DVD of Still Not Getting Any..., while making the CD the members of Simple Plan thought of many names including Get Rich or Die Trying, Enema of the State, and In The Zone. The group decided on the name Still Not Getting Any... for a list of explained reasons. The most popular and most likely reason is that the members of Simple Plan thought that they were not getting any good reviews, Bouvier once noting that the band only had one recent good review in Alternative Press. Still Not Getting Any... was a musical departure from the group's previous album. The band still kept its style of downbeat lyrics matched to upbeat music, but managed to transcend from the standard pop punk genre. Although many of the tracks on this CD still carry the feeling of teen angst that is probably most noticeable in the song "I'm Just a Kid" from No Pads, No Helmets...Just Balls, the general slant of this album tends toward slightly deeper and more mature lyrical themes, as well as a more mainstream sound that edges away from the pure pop punk style of the group's last album. Some critics have pointed towards the inclusion of "classic" or "mainstream" rock elements, claiming the album "de-emphasizes punk-pop hyperactivity in favor of straightforward, well-crafted modern rock".[14]

In 2005, their cover version of Cheap Trick's "Surrender" was featured in the soundtrack album for the superhero film, Fantastic Four.

After nearly a year and a half in support of Still Not Getting Any..., the band ended most touring in February 2006, playing only a few shows, taking some time off, and beginning work on the third studio album. Bouvier headed to Miami as on about 21 March 2007 to work with Dave Fortman. The band entered the studio for pre-production in Los Angeles on 29 June. On 15 July the band returned to Montréal, to record at Studio Piccolo, the same studio at which the band had recorded Still Not Getting Any.... The band finished recording and headed back to Miami and LA to mix the album. The final part of making the record was done in New York and it was officially completed on 21 October.

When I'm Gone, the first single from Simple Plan, was released on 29 October. The album was produced by Dave Fortman and Max Martin. On 17 February 2008, the band achieved its highest charting single in the UK. After the first two albums just missed the UK top 40, "When I'm Gone" gave the band its best chart position in the UK, coming in at number 26.

Simple Plan held an extensive tour schedule in support of the album. After completing an around-the-world promotional tour, Simple Plan played several December 2007 holiday shows. After continued promotional tours in January, Simple Plan played a triple bill in Camden Town, London on 27 January 2008, with the first show featuring songs from the band's first CD, the second from the second, and the third from the new release. The band played four U.S. shows in late February, and completed a European tour running until late April. The band played four Japan dates, followed by several European festivals and headlining dates. On 1 July 2008, the band gave a free concert on Québec City's Plains of Abraham, attracting a crowd of 150,000 to the Canada Day show.[15] After a return to the Far East in late July and early August, the band played a Cross Canada Tour[16] with Faber Drive, Cute is What We Aim For[17] and Metro Station. After dates in Germany, Mexico, and Australia, the band played its second full European tour of the year from 28 October to 29 November, playing Estonia and Poland for the first time. The band also played Tel Aviv and Dubai in early December—shows at which the band played as a four-piece, with Desrosiers absent due to a family emergency and Lefebvre on bass.

The band's fourth album Get Your Heart On! was released on 21 June 2011. The album marks Simple Plan's second time since No Pads, No Helmets...Just Balls to feature collaborations with other artists, including Weezer's Rivers Cuomo, Marie-Mai, Natasha Bedingfield, K'naan and Alex Gaskarth of All Time Low.[18] In April "Jet Lag" was released in English and French versions featuring singers Natasha Bedingfield and Marie-Mai respectively.[19] The band was on the roster of Warped Tour 2011 for selected dates in June and July 2011.[20]

In September and October 2011, Simple Plan performed four shows in Australia, on the "Get Your Heart On" tour, with supporting bands Tonight Alive and New Empire. During the Australian tour, Jenna McDougall from Tonight Alive featured in Jet Lag. We The Kings supported Simple Plan in Europe on a tour in spring 2012. The song "Last One Standing" was featured on the NASCAR The Game: Inside Line soundtrack.[21]

An EP titled Get Your Heart On – The Second Coming! was released on 3 December.[22] Consequently, Simple Plan uploaded the DVD, directed by Peter John from Epik Films / Shot By Peter John to the official Simple Plan YouTube channel, in high quality for free as a gift to the fans.

2014–present: Taking One for the Team

In March 2014, the band members started recording the first demos for the album, it was announced through ex-My Chemical Romance rhythm guitarist Frank Iero's Instagram that Iero are working with Simple Plan on the next album. This information was later confirmed by Comeau; the band estimates to release the album on the second half of 2015, plus the band discussed the band’s future projects. On 30 July 2014, the band formally stated that music writing for the next album had begun.[23][24] In December 2014, Simple Plan started to choose which songs would be included on the album.[25] "Saturday", was released on 21 June 2015, although the band stated this song would not be in the album.[26][27][28][29]

In April 2015, Simple Plan performed with up-and-coming Canadian singer Andee at the FIFA Women's World Cup Trophy Tour at MUCH in Toronto.[30]

On 28 August 2015, the band released "Boom", a song from the upcoming fifth album.[34] On the same day, a music video was released for the song, which contains footage from the 2015 Vans Warped Tour, The Alternative Press Music Awards, and a performance in Montreal at New City Gas; the video contains cameos from members of the bands MxPx, All Time Low, New Found Glory, PVRIS, Pierce the Veil, The Summer Set, Silverstein, Black Veil Brides, Parkway Drive and Issues.[35][36]

On 17 October 2015, it was leaked by Pierre Bouvier there will be a song called "Kiss Me Like Nobody's Watching". On 30 November 2015, the band revealed the title of the album would be Taking One for the Team. The group set the release date for 19 February 2016, along with the album cover and the first tour dates of the "Taking One for the Team World Tour", with shows scheduled in European countries.

"Opinion Overload", the second single from Taking One for the Team was released on 5 February 2016. Simple Plan released their third single "Singing In The Rain" internationally on 12 April.[38] The album was released on 19 February 2016. The album was described as a "pure, no-frills, feel-good fun, a start-to-finish crowd-pleaser for fans of that classic pop-punk sound."[39] On 5 December, Simple Plan released "Christmas Everyday", 15 years after their last Christmas song and first single, "My Christmas List".[40] In 2017, the band embarked on a tour in support of the 15th anniversary of their debut album "No Pads, No Helmet... Just Balls", during which they play the entire album front to back during each show.[41]

A fundraising event was held in September 2009 in Montréal. In October 2008, the band announced a special release, on iTunes, of the single "Save You", to benefit the Foundation, with a special composite video featuring cancer survivors. The song was inspired by the struggle with cancer of Bouvier's brother Jay.[57]

In 2012, to mark the band's tenth anniversary, the book Simple Plan: The Official Story was released, which was used as a fundraiser for the Simple Plan Foundation.[59]

This article uses material from the article David Desrosiers from the free encyclopedia Wikipedia and it is licensed under the GNU Free Documentation License.

Game Over Lea Lu
Update Required To play the media you will need to either update your browser to a recent version or update your Flash plugin.