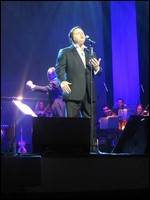 Paul Robert Potts (born 13 October 1970)[1] is a British tenor. In 2007, he won the first series of ITV's Britain's Got Talent with his performance of "Nessun dorma", an aria from Puccini's opera Turandot. As a singer of operatic music, Potts recorded the album One Chance, which topped sales charts in nine countries. Prior to winning Britain's Got Talent, Potts was a manager at The Carphone Warehouse. He had served as Bristol city councillor from 1996 until 2003, and also had performed in amateur opera from 1999 to 2003.

Potts was born in Kingswood and raised in nearby Fishponds by his father Roland, a bus driver, and mother, Yvonne (née Higgins), a supermarket cashier.[2] He has two brothers and one sister.

Potts attended St Mary Redcliffe and Temple School, where he developed his love of singing.[3] He also sang with the choir at Chester Park Junior School and with the choirs at several Bristol churches, including Christ Church. Potts said in interviews that he had been bullied in school, and that experience may have made him lack self-confidence. He has also said that his voice had always been a source of solace in the past when he was bullied.[4]

After he left school in 1987 Potts had various jobs including working at Waitrose and Tesco; he also worked part-time at Debenhams.

In 1993 Potts earned a B.A. (Bachelor of Arts) Honours degree in Humanities from University College Plymouth St Mark & St John.[5] In 1996, Potts was elected the youngest member of Bristol City Council; a Liberal Democrat, he served until 2003.[3][6] Potts was a manager at mobile phone store Carphone Warehouse in Bridgend, Wales, and lived in Port Talbot.

After winning Britain's Got Talent, Potts took a six-month sabbatical from his job and resigned on 5 March 2008.[7] Potts took up singing lessons in Italy, but the expense meant that he was forced to give them up.

Potts first sang opera in the minor roles of The Prince of Persia and the Herald in Puccini's Turandot for Bath Opera, an amateur company, in 1999. He then performed leading roles on four occasions: Don Basilio in Mozart's Marriage of Figaro in 2000; Don Carlos in Verdi's Don Carlos in 2001; Don Ottavio in Mozart's Don Giovanni in 2003; and Radames in Verdi's Aida in 2003.[4][8][9] He also performed the role of the Chevalier des Grieux in Puccini's Manon Lescaut for the Southgate Opera Company in London, an amateur company, in May 2003. Additionally, he sang with a small ensemble from the Royal Philharmonic in front of an audience of 15,000 and toured northern Italy as a soloist as part of his music classes there.[8]

In several interviews, Potts revealed that he performed Aida despite doctors' wishes to remove an adrenal tumour they had discovered during his illness from a burst appendix, and shortly after the tumour surgery performed Manon Lescaut. Potts broke his collarbone and suffered whiplash in a bicycle accident in 2003. The mishap and financial difficulties that followed led him to enter Britain's Got Talent despite not having sung in years.[10]

Potts auditioned for Simon Cowell's new talent show Britain's Got Talent at the Wales Millennium Centre in Cardiff, Wales on 17 March 2007. The audition was televised on ITV in the UK on 9 June 2007.[11] Potts sang the full rendition of Giacomo Puccini's "Nessun dorma", which was condensed for broadcast. His rendition of the song brought looks of awe from the judges. Potts received a standing ovation from the audience of 2,000 people. The YouTube video clip from the show has had more than 120 million views, making it one of the top 100 most watched YouTube videos.[12]

In the semi-final on 14 June 2007, Potts performed the main verses of Andrea Bocelli's "Time To Say Goodbye".[13] He progressed to the final after receiving the highest public vote in that show.[14] He performed "Nessun dorma" again for his finale on 17 June 2007, as well as an encore after he won the competition. Potts defeated the bookmakers' co-favourite Connie Talbot, and received the highest percentage of two million votes cast to win £100,000. He then performed at the Royal Variety Performance on 3 December 2007, in front of Queen Elizabeth II.

On 3 December 2012, he was invited to celebrate 100 years of the Royal Variety Performance alongside Spelbound and Diversity.

The Sun newspaper received complaints following allegations that Potts had been "coached by Pavarotti".[15] There was anger that he was portrayed on Britain's Got Talent as a simple mobile-phone salesman, when he had in fact appeared in six amateur opera productions and in a concert for the Royal Philharmonic Orchestra,[15] and had plans for a summer tour with that orchestra.[8] Potts responded that he had not claimed to be completely untutored, only that he had never performed any concert for pay and was therefore an amateur. He also said that the Pavarotti masterclass he attended in Italy was paid for from his own savings and was a single masterclass, not regular coaching.[16]

After Britain's Got Talent

In the United States, he was profiled on a National Public Radio programme called Day to Day,[17] and appeared live on NBC's programme Today.[18]

In July 2007, Potts performed his rendition of "Nessun dorma" at a Katherine Jenkins concert at Margam Park, Wales.[19] On 16 July 2007, his debut album One Chance was released in the UK, and claimed the No. 1 spot in the UK Album Chart the following week. In December 2007, Prime Minister Gordon Brown presented Potts with a platinum disc for having sold 2,000,000 copies of his album.[20]

On 13 December 2007, he performed in Leipzig in the live television broadcast of the 13th annual José Carreras Gala, accompanied by the Deutsches Filmorchester Babelsberg under the direction of Scott Lawton.[21] In January he began his concert series[22] of 97 concerts in 85 cities across 23 countries; this ended on 12 November. This included three outdoor classical music concerts with the Finnish violinist Linda Brava and the Prague Philharmonic Orchestra at Sofiero Palace, Sundbyholms Castle and Slottskogsvallen from 24 to 26 July.[23] In the semi-finals of the 2009 series of Britain's Got Talent, Potts appeared in a comeback performance.

Potts was invited to appear on an episode of The Oprah Winfrey Show about YouTube, a site where clips of his performances had been viewed over 92 million times as of April 2012;[24] as of April 2009, his first appearance on Britain's Got Talent was the fourth most viewed YouTube video in the UK. On 24 November 2007, Potts was interviewed on the National Public Radio programme Weekend Edition. On 15 August 2008, he performed before the German football season opener match between Bayern Munich and Hamburger SV in front of 69,000 visitors as well as on 2 September 2008 during the farewell game for Oliver Kahn.

In July 2008, Deutsche Telekom began using a TV and cinema advertisement centred on his Britain's Got Talent performance.[25] In August 2008, he did a now famous duet with Daniel Powter on the Wolfbaggin' Tour. In October 2008, Paul Potts sang in Japanese TV advertisements for Ryukakusan Direct throat medicine.[26] Potts received two nominations at the Echo Awards 2009 in Germany: Best International Male Artist and Album of the Year. He won the 2009 Echo Award for Best International Male Artist on 21 February 2009. On 22 April 2009, Potts was the guest co-host on the Australian television programme The Morning Show with Kylie Gillies. Expanding his talent to the online world, Paul Potts recently performed an exclusive in studio performance for AOL Sessions.[27] He collaborated with Swedish singer Carola Häggkvist on her Christmas album Christmas in Bethlehem, singing "O Holy Night". Potts has appeared twice on the popular Korean Talent TV show Star King, first in 2008 and once again in 2010.

Potts was in Toronto on 10 November 2010 performing a "flash opera" at the Union Subway Station to a moderately-sized crowd and finished to loud applause.[28]

Potts has been married since May 2003 to Julie-Ann (née Cooper) whom he met in an Internet chat room. They met in person for the first time at Swansea railway station in February 2001. She had the upper hand at this "first meeting" as she had a photograph of Potts, but he had no idea what she looked like.[29] As of May 2009 he had assets of £5 million.[30] Potts has moved since BGT, but continues to live in Port Talbot.

The Weinstein Company has adapted Potts's life in a film called One Chance, which stars James Corden as Potts. The script is by Justin Zackham and the film is directed by David Frankel, the director of The Devil Wears Prada.[43][44]

One Chance: A Memoir

In 2013, Potts memoir, called One Chance, was published by Weinstein Books, as a companion to the 2013 film of the same name. One Chance describes Potts difficult childhood, enduring passion for music, Britains Got Talent win, and subsequent professional career. One Chance was featured as a top film tie-in of the year by Publishers Weekly, where it was described as a fascinating taleof the shy Welsh store manager who seized his dreams and won worldwide audiences."[45]

This article uses material from the article Paul Potts from the free encyclopedia Wikipedia and it is licensed under the GNU Free Documentation License.

Angel in Blue Jeans Train
Update Required To play the media you will need to either update your browser to a recent version or update your Flash plugin.