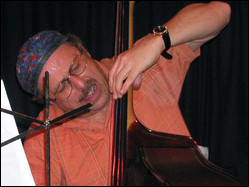 Fonda was born in Amsterdam, New York to parents who both played jazz. He played guitar as a youth but switched to bass guitar later on. He studied bass at Berklee College of Music, where he also began playing upright bass. He played in the New Haven, Connecticut area in the early 1980s, and recorded with Wadada Leo Smith. In 1994 he began playing with Anthony Braxton, collaborating with him extensively for the next five years. He and Michael Jefry Stevens co-lead an ensemble, the Fonda-Stevens group, that began in 1991 and has continued through 2009. The group has recorded 10 cds and continues to perform extensively in Europe and the United States. Since the late 1990s Fonda has recorded often as a bandleader.

Fonda has also explored dance in relation to jazz music; he played bass with a dance company in the 1980s and incorporated a tap dancer into his ensemble for the albums From the Source and The Healing.

This article uses material from the article Joe Fonda from the free encyclopedia Wikipedia and it is licensed under the GNU Free Documentation License.