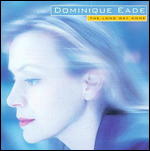 Dominique Eade is an American jazz singer and composer. She lives near Boston and is on the faculty of the New England Conservatory.[1]

Her work has been praised by the Boston Phoenix, Newsday, and Peter Watrous and David Hajdu of the New York Times.[4] Entertainment Weekly named her the "best jazz singer" in their article about up-and-coming artists for 1996.[4]

This article uses material from the article Dominique Eade from the free encyclopedia Wikipedia and it is licensed under the GNU Free Documentation License.

I Wanna See You Again Steven Parry
Update Required To play the media you will need to either update your browser to a recent version or update your Flash plugin.