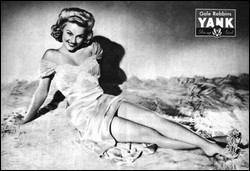 Born in Indiana, Robbins graduated from high school in June 1939 and began her career with the Phil Levant band in 1940. She married her high school sweetheart, Robert Olson, in November 1944 when he was in the Air Force.

Starting as a model and nightclub singer she made her film debut in In the Meantime, Darling in 1944 and appeared in several films, such as Calamity Jane and My Dear Secretary (1948). She later focused on TV, hosting Hollywood House from 1949 to 1950. She released the album I'm a Dreamer, backed by Eddie Cano and his orchestra, in 1958. She made three guest appearances on The Bob Cummings Show between 1955-1958.

This article uses material from the article Gale Robbins from the free encyclopedia Wikipedia and it is licensed under the GNU Free Documentation License.

Everybody Levin
Update Required To play the media you will need to either update your browser to a recent version or update your Flash plugin.