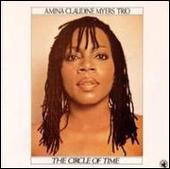 Born in Blackwell, Arkansas (a small community on US 64 in western Conway County), Myers started singing and playing the piano and organ as a child in church choirs in the Dallas/Fort Worth area in Texas, where she grew up, and directed choirs at an early age. She graduated in concert music and music education at Philander Smith College in Little Rock, Arkansas in the early 1960s. After graduation, she moved to Chicago, where she taught music, attended classes at Roosevelt University and worked with musicians such as Sonny Stitt and Gene Ammons. In 1966 she joined the AACM in Chicago, focusing on vocal compositions and arrangements, and recording her first jazz album with Kalaparusha Maurice McIntyre in 1969.

In 1976 Myers relocated to New York City,[2] where she intensified her compositional work and expanded it into the realm of Off-Broadway productions. She also continued performing and recording as a pianist and organist. Around 1978 she began touring in Europe with the Lester Bowie Quintet and his New York Organ Ensemble.[2] In 1985 she joined Charlie Haden's Liberation Music Orchestra.

This article uses material from the article Amina Claudine Myers from the free encyclopedia Wikipedia and it is licensed under the GNU Free Documentation License.

New York State Of Mind Billy Joel
Update Required To play the media you will need to either update your browser to a recent version or update your Flash plugin.