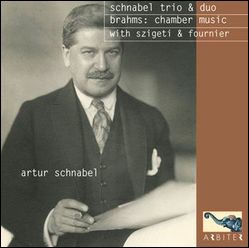 From Wikipedia, the free encyclopedia.
Artur Schnabel (April 17, 1882  August 15, 1951) was an Austrian classical pianist, who also composed and taught. Schnabel was known for his intellectual seriousness as a musician, avoiding pure technical bravura. Among the 20th century's most respected and most important pianists, his playing displayed a vitality, profundity and spirituality in the Austro-German classics, particularly the works of Beethoven and Schubert. His performances of these compositions have often been hailed as models of interpretative penetration, and his best-known recordings are those of the Beethoven piano sonatas. Harold C. Schonberg referred to Schnabel as "the man who invented Beethoven".[1]

Born in Lipnik (Kunzendorf) near Bielitz, Galicia, Austro-Hungarian Empire (today a part of Bielsko-Biaa, Poland),[2][3] Schnabel was the youngest of three children born to Isidor Schnabel, a textile merchant, and his wife, Ernestine Taube (née Labin). He had two sisters, Clara and Frieda.[3][4] His family was Jewish.[5]

Schnabel's parents moved to Vienna in 1884, when he was two. He began learning the piano at the age of four, when he took a spontaneous interest in his eldest sister Clara's piano lessons. His prodigious talent quickly became evident. At the age of six he began piano lessons under Professor Hans Schmitt of the Vienna Conservatorium (today the University of Music and Performing Arts, Vienna). Only three years later he was accepted as a pupil by the redoubtable and internationally celebrated piano pedagogue Theodor Leschetizky.[3][4]

Schnabel remained under Leschetizky's tutelage for seven years, between 1891 and 1897. His co-students of Leschetizky during that period included Ossip Gabrilowitsch, Mark Hambourg and Ignaz Friedman.

Initially, for his first year under Leschetizky, he was given rigorous preparatory technical tuition from Anna Yesipova (Leschetizkys second wife and a famous pianist in her own right) and also from Malwine Bree who was Leschetizky's assistant.[4] From age ten, he participated in all Leschetizky's classes.[2]

Following a failed initial approach to Anton Bruckner, Schnabel studied music theory and composition under Eusebius Mandyczewski. Mandyczewski was an assistant to Johannes Brahms, and through him Schnabel was introduced to Brahms' circle and was often in the great composer's presence. The young Schnabel once heard Brahms play in a performance of his first piano quartet; for all the missed notes, said Schnabel, it "was in the true grand manner."[2]

Schnabel made his official concert debut in 1897, at the Bösendorfer-Saal in Vienna. Later that same year, he gave a series of concerts in Budapest, Prague and Brünn (today Brno, Czech Republic).[3]

Schnabel moved to Berlin in 1898, making his debut there with a concert at the Bechstein-Saal.[3] Following World War I, Schnabel also toured widely, visiting the United States, Russia and England.

He gained initial fame thanks to orchestral concerts he gave under the conductor Arthur Nikisch as well as playing in chamber music and accompanying his future wife, the contralto Therese Behr, in Lieder.

In chamber music, he founded the Schnabel Trio with the violinist Alfred Wittenberg and the cellist Anton Hekking; they played together between 1902 and 1904. In 1905, he formed a second Schnabel Trio with Carl Flesch (with whom he also played violin sonatas) and the cellist Jean Gérardy. In 1914, with the outbreak of the First World War, Gérardy (a Belgian) left the trio as he could no longer remain in Germany. He was replaced by Hugo Becker and this became the third Schnabel Trio.

He was friends of, and played with, the most distinguished conductors of the day, including Wilhelm Furtwängler, Bruno Walter, Otto Klemperer, George Szell, Willem Mengelberg, and Sir Adrian Boult.

Schnabel, who was Jewish, left Berlin in 1933 after the Nazi Party took control. He lived in England for a time while giving masterclasses at Tremezzo on Lake Como in Italy, before moving to the United States in 1939. In 1944, he became a naturalized citizen of the United States. There he took a teaching post at the University of Michigan, returning to Europe at the end of World War II. Among his pupils in Michigan was composer Sam Raphling.

His mother Ernestine Taube remained in Vienna after the Anschluss and at the age of 83, in August 1942, was deported to Ghetto Theresienstadt, where she died two months later. Artur Schnabel never returned to Germany or Austria after the war.

He continued to give concerts on both sides of the Atlantic until the end of his life, as well as composing and continuing to make records, although he was never very fond of the whole studio process. He died in Axenstein, Switzerland, and was buried in Schwyz, Switzerland.

Schnabel was best known for his devotion to the core German composers, especially the Viennese classics of Mozart, Beethoven and Schubert. He was also renowned for his playing of works by Brahms and Schumann. He also played and recorded works by Bach.

However, his repertoire was wider than that. During his young virtuosic years in Berlin, he played works by other composers including Liszt, Chopin and Weber. On his early American tours, he programmed works such as the Chopin Preludes and Schumann's Fantasie in C.[8] Among other works that he played, as recalled by those such as Claudio Arrau and Vladimir Horowitz, who had heard Schnabel in the 1920s, were Chopin's E minor Piano Concerto and the Piano Sonata No. 2 in B-flat minor, and Weber's Konzertstück in F minor, Piano Sonata No. 2, and Invitation to the Dance.[9][10] Schnabel himself mentioned that he had played the Liszt Sonata in B minor "very often", as well as the Liszt E-flat Piano Concerto.[2]

It is not clear why Schnabel dropped those from his performing repertoire in the 1930s, after his final departure from Germany. He claimed that it was because he decided that he wanted to play only "music which is better than it could be performed".[2] However, it has been suggested by some that "Schnabel, uprooted from his native heritage, may have been clinging to the great German composers in an attempt to keep his cultural origins alive".[11]

Schnabel was known for championing the then-neglected sonatas of Schubert and, even more so, Beethoven, including his more challenging late works. While on a tour of Spain, Schnabel wrote to his wife saying that during a performance of Beethoven's Diabelli Variations he had begun to feel sorry for the audience. "I am the only person here who is enjoying this, and I get the money; they pay and have to suffer," he wrote. Schnabel did much to popularize Beethoven's piano music, making the first complete recording of the sonatas, completing the set for the British label HMV in 1935. This set of recordings has never been out of print and is considered by many to be the touchstone of Beethoven sonata interpretations, though shortcomings in finger technique mar many performances of fast movements (Sergei Rachmaninoff is supposed to have referred to him as "the great adagio pianist"). It has been said that he suffered greatly from nerves when recording; in a more private setting, his technique was impeccable. Claudio Arrau has said that Schnabel's live performances during the 1920s were technically "flawless."[12] He also recorded all the Beethoven piano concertos.

Despite his performing repertoire being concentrated largely on the works of Beethoven, Schubert, Mozart and Brahms, almost all of his own compositions (none of which are in the active repertoire) are atonal. (It is interesting, in this regard, to note that Schnabel was a close friend of Arnold Schoenberg, his Austrian-American compatriot, who was famous as a pioneering composer of atonal and twelve-tone music.)

They are "difficult" yet fascinating and complex works, and are marked by genuine originality of style. Composers Ernst Krenek and Roger Sessions have commented that they show signs of undoubted genius (see biography of Schnabel by Cesar Saerchinger). Schnabel's list of compositions eventually included three symphonies, a piano concerto, a piano sonata (premiered by Eduard Erdmann at the 1925 Venice ISCM Festival[13]) and five string quartets, amongst various smaller works.

In recent years, a number of his compositions (notably championed by the violinist Paul Zukofsky) have been recorded and made available on CD, including three of his string quartets, the three symphonies, a rhapsody for orchestra, and four solo piano works: his Sonata, Dance Suite, Piece in Seven Movements (193537) and Seven Pieces (1947).

Wikiquote has a collection of quotations related to: Artur Schnabel

This article uses material from the article Artur Schnabel from the free encyclopedia Wikipedia and it is licensed under the GNU Free Documentation License.