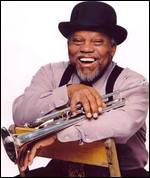 Marcus Batista Belgrave (June 12, 1936 – May 24, 2015)[1][2] was an American jazz trumpet player from Detroit, born in Chester, Pennsylvania. He recorded with numerous musicians from the 1950s onwards.[3] Belgrave was inducted into the class of 2017 of the National Rhythm & Blues Hall of Fame in Detroit, Michigan.

Belgrave was an occasional faculty member at Stanford Jazz Workshop and a visiting professor of jazz trumpet at the Oberlin Conservatory.

Belgrave died on May 23, 2015, in Ann Arbor, Michigan, of heart failure, after being hospitalized since April with complications of chronic obstructive pulmonary disease and congestive heart failure.[1][2][5]

With Wynton Marsalis and Jazz at Lincoln Center Orchestra

This article uses material from the article Marcus Belgrave from the free encyclopedia Wikipedia and it is licensed under the GNU Free Documentation License.

Devil Inside Me Run
Update Required To play the media you will need to either update your browser to a recent version or update your Flash plugin.