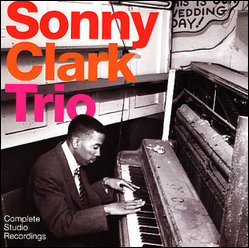 Clark was born and raised in Herminie, Pennsylvania, a coal mining town east of Pittsburgh.[2] His parents were originally from Stone Mountain, Georgia.[2] His miner father, Emery Clark, died of a lung disease two weeks after Sonny was born.[2] Sonny was the youngest of eight children.[2] At age 12, he moved to Pittsburgh.

When visiting an aunt in California at age 20, Clark decided to stay and began working with saxophonist Wardell Gray. Clark went to San Francisco with Oscar Pettiford and after a couple months, was working with clarinetist Buddy DeFranco in 1953. Clark toured the United States and Europe with DeFranco until January 1956, when he joined The Lighthouse All-Stars, led by bassist Howard Rumsey.

Clark died in New York City; the official cause was listed as a heart attack, but the likely cause was a heroin overdose.[3][4][5][6]

Close friend and fellow jazz pianist Bill Evans dedicated the composition "NYC's No Lark" (an anagram of "Sonny Clark") to him after his death, included on Evans' Conversations with Myself (1963). John Zorn, Wayne Horvitz, Ray Drummond, and Bobby Previte recorded an album of Clark's compositions, Voodoo (1985), as the Sonny Clark Memorial Quartet. Zorn also recorded several of Clark's compositions with Bill Frisell and George Lewis on News for Lulu (1988) and More News for Lulu (1992).

These albums were recorded in 1961-62 for Blue Note, but not released until 1980. They have since been reissued as The Complete Quartets with Sonny Clark.

With Howard Rumsey's Lighthouse All Stars

This article uses material from the article Sonny Clark from the free encyclopedia Wikipedia and it is licensed under the GNU Free Documentation License.