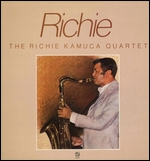 Kamuca was born in Philadelphia, and, like many players associated with West Coast jazz, grew up in the East before moving West around the time that bebop changed the prevailing style of jazz. His early playing, in what is generally considered the Lester Young style, was done on tour with the big bands of Stan Kenton and Woody Herman, where he became a member of the later line-ups of Herman's Four Brothers saxophone section with Al Cohn and Bill Perkins.[1]

Kamuca stayed on the West Coast, playing with the smaller groups of Chet Baker, Maynard Ferguson, Shorty Rogers, and others. He was one of the Lighthouse All-Stars in 1957 and 1958, and recorded with Perkins, Art Pepper, Jimmy Rowles, Cy Touff and many others in those years, as well as leading recording sessions in his own right.

Kamuca was a member of the group Shelly Manne and His Men from 1959 through 1962, when he returned East and settled in New York. Here he worked with Gerry Mulligan, Gary McFarland, and Roy Eldridge before returning to the West Coast in 1972, where he recorded in the studios and performed with local groups.

Less well known to the general public than saxophonists like Stan Getz, who played in a similar Lester Young-derived style, Kamuca died of cancer, in Los Angeles, just before his 47th birthday.[2]

With Chet Baker and Bud Shank

With Chet Baker and Art Pepper

With Herb Ellis and Jimmy Giuffre

This article uses material from the article Richie Kamuca from the free encyclopedia Wikipedia and it is licensed under the GNU Free Documentation License.

I'm Sorry To Say Rodriguez feat. Carlos Tarque
Update Required To play the media you will need to either update your browser to a recent version or update your Flash plugin.