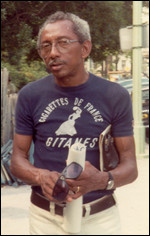 Newman was born in New Orleans, Louisiana to David (pianist) and Louise Newman, a musical family, having his first music lessons from David Jones. He attended Alabama State College, where he joined the college band (the Bama State Collegians), became its leader, and took it on tour.

In 1941 he joined Lionel Hampton for two years, before signing with Count Basie, with whom he stayed for a total of thirteen years, interrupted by short breaks and a long period (1947-1952) spent first with saxophonist Illinois Jacquet and then drummer J. C. Heard. During his second period with Basie, which lasted for about nine years, he made a number of small-group recordings as leader. He also played on Benny Goodman's 1962 tour of the Soviet Union.

In 1961 Newman left the Basie band, and helped to found Jazz Interactions, of which he became president in 1967. His wife, Rigmor Alfredsson Newman was the Executive Director. Jazz Interactions was a charitable organisation which provided an information service, brought jazz master classes into schools and colleges, and later maintained its own Jazz Interaction Orchestra (for which Newman wrote).

In the 1970s and 1980s Newman toured internationally, and recorded for various major record labels. He suffered a stroke in 1991, however, which seriously disabled him.

With Clark Terry and Chico O'Farrill

This article uses material from the article Joe Newman (trumpeter) from the free encyclopedia Wikipedia and it is licensed under the GNU Free Documentation License.

Bad, Bad Leroy Brown Jim Croce
Update Required To play the media you will need to either update your browser to a recent version or update your Flash plugin.