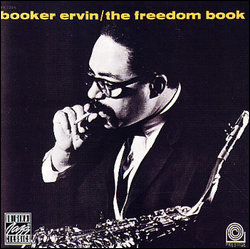 Booker Telleferro Ervin II (October 31, 1930 – August 31, 1970[1]) was an American tenor saxophone player. His tenor playing was characterised by a strong, tough sound and blues/gospel phrasing. He is best known for his association with bassist Charles Mingus.

Ervin was born in Denison, Texas. He first learned to play trombone at a young age from his father, who played the instrument with Buddy Tate.[2] After leaving school, Ervin joined the United States Air Force, stationed in Okinawa, during which time he taught himself tenor saxophone.[2] After completing his service in 1953, he studied at Berklee College of Music in Boston. Moving to Tulsa in 1954, he played with the band of Ernie Fields.[2]

Ervin moved to New York City to join Horace Parlan's quartet, with whom he recorded Up & Down and Happy Frame of Mind (both for Blue Note Records). Ervin worked with Charles Mingus from 1956 to 1963. During the 1960s, Ervin led his own quartet, recording for Prestige Records with, among others, ex-Mingus associate pianist Jaki Byard, along with bassist Richard Davis and Alan Dawson on drums.

Ervin later recorded for Blue Note Records and played with pianist Randy Weston, with whom he recorded between 1963 and 1966. Weston has said: "Booker Ervin, for me, was on the same level as John Coltrane. He was a completely original saxophonist.... He was a master.... 'African Cookbook', which I composed back in the early '60s, was partly named after Booker because we (musicians) used to call him 'Book,' and we would say, 'Cook, Book.' Sometimes when he was playing we'd shout, 'Cook, Book, cook.' And the melody of 'African Cookbook' was based upon Booker Ervin's sound, a sound like the north of Africa. He would kind of take those notes and make them weave hypnotically. So, actually the African Cookbook was influenced by Booker Ervin."[3]

Most biographical accounts of Ervin's death give an incorrect date. His gravestone in The National Cemetery, East Farmingdale, New York clearly shows the date as August 31st 1970.

This article uses material from the article Booker Ervin from the free encyclopedia Wikipedia and it is licensed under the GNU Free Documentation License.