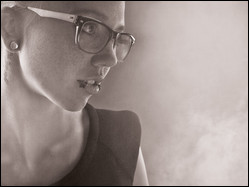 Stefanie Fabienne Heinzmann (born 10 March 1989) is a Swiss pop singer and television personality. She gained public interest in early 2008 when she won SSDSDSSWEMUGABRTLAD, a talent contest hosted in Stefan Raab's late-night-show TV total on the German ProSieben network. Following her win, Heinzmann released her debut single "My Man Is a Mean Man," which debuted straight atop the Swiss Singles Chart and became a top ten hit in Austria and Germany. Her pop soul-influenced album Masterplan was released in March 2008 and made it to the top ten in Austria and Germany, also reaching number one in Switzerland, where it was certified platinum by the IFPI for more than 30,000 copies sold.[1]

Heinzmann followed this with a series of successful albums, including the chart toppers Roots to Grow (2009), Stefanie Heinzmann (2012), Chance of Rain (2015), all of which entered the top five in Switzerland. Several singles from these album became top ten hits on the pop charts throughout German-speaking Europe, including her cover version of Metallica's "The Unforgiven" as well as "Diggin' in the Dirt", and "In the End". One of the best-selling Swiss artists to emerge in the late 2000s, Heinzmann has won several high-profile prizes as a recording artist such as Prix Walo, the 1LIVE Krone, a Comet, a Swiss Music Award, the Radio Regenbogen Award, and the 2009 ECHO Award.[2] Beyond her music career, Heinzmann has been featured as a coach on two seasons of the reality competition television series The Voice of Switzerland and the talent series Popstars.

Heinzmann was born in Visp in the canton of Valais in Switzerland. She is the younger sister of Claudio, a music manager and singer on his own.[3] Heinzmann attended the commercial school for athletes and artists at the Kollegium Brig.[4]

In 2005, she started her music career as the leading singer of the rock band Bigfisch. Their first single "Chumm ins Wallis" (Swiss German for "Come to Valais") became a local airplay success and was voted "Biggest Valais Hit of the Year" by local radio station Radio Rottu Oberwallis (RRO) in 2007.[5] In summer 2007, her brother convinced Heinzmann to take part in Stefan Raab's talent contest SSDSDSSWEMUGABRTLAD, organised by commercial television channel ProSieben. She was picked as one of the 20 contestants for the show, and with her interpretations of soul, jazz and funk classics by the likes of Macy Gray, Norah Jones and Joss Stone, she managed to qualify for the final show on 10 January 2008. There, Heinzmann performed two songs, "Only So Much Oil in the Ground," a Tower of Power cover, and "My Man Is a Mean Man," which was specifically selected for her. Through televoting, the audience chose Heinzmann as the winner of the show, beating the two remaining contestants, Steffi List and Gregor Meyle. The music video for "My Man Is a Mean Man" was shot during the night of the final and premiered on German television channels days later.[6]

Heinzmann's competition song "My Man Is a Mean Man", composed by Swedish producers Gustav Jonsson, Tommy Tysper and Marcus Sepehrmanesh, went on sale the day after the final. The single went straight to the top of the Swiss Singles Chart and reached the top ten in Austria and Germany, where it became a successful airplay hit during the following months, and established Heinzmann as one of the biggest-selling newcomers of the year.[7] The song was eventually certified platinum in Germany by the Bundesverband Musikindustrie (BVMI) as well.[8]

Her first album, Masterplan, primarily produced by Paul NZA and Marek Pompetzki at Berlin Numarek-Studios, was released on 7 March 2008, throughout German-speaking Europe. Like the single, it peaked within the top ten in Austria and Germany, and debuted at number-one in the Swiss Albums Chart, where it was eventually certified platinum for more than 30,000 copies sold.[1] Altogether, Masterplan sold more than 300,000 copies Europe-wide,[7] and earned the singer several prizes such as the Prix Walo, the 1LIVE Krone, a Comet, a Swiss Music Award, and the 2009 ECHO Award for Best Female Artist National Rock/Pop.[9] A reissue of the album was released on 19 November 2008 and included the previously unreleased song "The Unforgiven", a Metallica cover which became her second top ten hit in Germany.[10]

In support of the album, Heinzmann embarked on a festival concert tour from May until September 2008, visiting venues throughout Germany and Switzerland. In May 2008, Heinzmann and her brother founded heinzmann-productions GmbH. Claudio serves as the Chairman of the Board, while Stefanie is incorporated as the company's official CEO.[11]

In September 2009, Heinzmann's second album Roots to Grow was released.[2] The singer re-teamed with production duo NZA and Pompetzki to work on the majority of the album, which features songwriting credits by Joss Stone, Rick Nowels, Guy Chambers, Lucie Silvas, SoShy and Bryn Christopher, as well as collaborations with singers such as Gentleman and Ronan Keating. Upon its release, Roots to Grow reached number four on the Swiss Albums Chart and made it to the top twenty in Germany, but was less successful than its predecessor Masterplan (2008).[2] Leading single "No One (Can Ever Change My Mind)" peaked at number twenty-seven on the Swiss Singles Chart.[12]

In 2012 Heinzmann's traveled to America to record her third studio album, Stefanie Heinzmann, was released on March 16, 2012 in German-speaking Europe. Again, the singer re-teamed with NZA and Pompetzki to work on the album, involving contribution by Eric Bazilian, Julie Frost, Jamie Cullum, Ian Dench, Alice Smith, Sharon Vaughn, and Kim Sanders. The album's first offering "Diggin' in the Dirt" became her highest-charting single in years, reaching number six in Switzerland, where the song became her first top ten entry since "My Man Is a Mean Man". Also 2012, it was announced that Heinzmann would join the jury of the debut season of The Voice of Switzerland in 2013.[13]

In 2015, Heinzmann released her fourth album Chance of Rain. Though it failed to chart on the Austrian Albums Chart, Chance of Rain became her fourth consecutive top five album in Switzerland. "In the End", the album's lead single, became her third top ten hit and highest-charting single since "Diggin' in the Dirt" , reaching number nine on the Swiss Singles Chart. In May 2015, Heinzmann along with Miss Platnum and Bella Garcia joined the jury of the German Popstars adaption.[14]

This article uses material from the article Stefanie Heinzmann from the free encyclopedia Wikipedia and it is licensed under the GNU Free Documentation License.

La notte non ritorna mai Luca Capizzi
Update Required To play the media you will need to either update your browser to a recent version or update your Flash plugin.