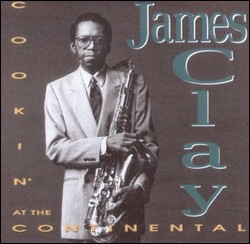 James Earl Clay (b. Sept. 8, 1935, Dallas, Texas - d. there, Jan. 1, 1994) was an American hard bop jazz tenor saxophonist and flutist. While in school Clay played alto saxophone, became a professional musician, and played with local bands in Dallas, including with Booker Ervin. Later, he went to California, there he played in 1957 in Red Mitchell's quartet and on recordings with Lawrence Marable. at the end of 1957 he returned to his hometown of Dallas, and served in the Army in 1959.[1]

This article uses material from the article James Clay (musician) from the free encyclopedia Wikipedia and it is licensed under the GNU Free Documentation License.

Here Gabriel Benedek
Update Required To play the media you will need to either update your browser to a recent version or update your Flash plugin.