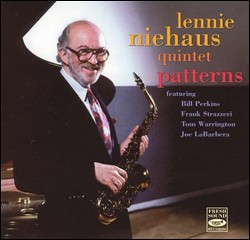 Lennie Niehaus (né Leonard Niehaus; born June 1, 1929) is an American alto saxophonist, arranger, and composer on the West Coast jazz scene. He has played with the Stan Kenton big band, and various other jazz bands on the West Coast of the U.S. Niehaus has arranged and composed for motion pictures, including several produced by Clint Eastwood.[1][2][3][4][5][6][7][8]

Education and active years as a musician

Niehaus was born in St. Louis, Missouri, US. His sister was a concert pianist, his father, Père Niehaus, an expert violinist. His father started him on violin at age seven, then Lennie changed to bassoon. At thirteen, Niehaus began alto saxophone and clarinet, about this time he began composing. In 1946, after graduation from Roosevelt High School, Niehaus started studying music at Los Angeles City College later earning a music education degree from Los Angeles State College in 1951 as part of the school's first full graduating class. Niehaus started his professional career arranging for and playing alto saxophone with Phil Carreón and His Orchestra in the Los Angeles area. Members of the band included saxophonists Herb Geller, Herbie Steward, and Teddy Edwards.[9][10][11][12]

Niehaus went out on the road with the Stan Kenton orchestra for six months but was drafted into the army in 1952. Discharged in 1954, he rejoined Kenton for five years.[1] He wrote extensively for the Kenton band and had the longest and most recorded tenure of any of the lead alto players with the group to include noted names as Charlie Mariano, Lee Konitz, Gabe Baltazar, or Tony Campise. He left the Kenton orchestra in 1959 to pursue music composition in the studios. He arranged music for the King Sisters, Mel Tormé, Dean Martin, and Carol Burnett.

Orchestrating and composing for film

In 1962 he began orchestrating for film composer Jerry Fielding. Niehaus worked with Fielding on approximately seventy TV shows and films like Straw Dogs and Bring Me the Head of Alfredo Garcia by Sam Peckinpah, the comedy The Bad News Bears or the horror film Demon Seed. Since Fielding’s death, Lennie has been a leading film composer in his own right; he always does his own orchestrating for his scores.[13]

In films Lennie never forgets his jazz roots. The story of the 1984 film City Heat was cast in the 1930s, so he wrote jazz of that period using people like altoist Marshal Royal. Bill Perkins came in and played like Lester. He had a jazz violinist who sounded like Stephane Grappelli. Then there was a boogie woogie sequence with three pianists Pete Jolly, Mike Land and co-star Clint Eastwood.[14]

With Clint Eastwood Niehaus had probably the most significant relation. Sharing a passion for jazz they knew each other for a long time. Niehaus had already orchestrated scores for films starring Eastwood like Tightrope (1984), that was also produced by Eastwood. But it was not until Eastwood's eleventh direction, 1985 Pale Rider, that Niehaus actually wrote the first score for one of his films. Niehaus then wrote the musical scores for the following twelve films up to Blood Work in 2002, and orchestrated the music for the next six features that Eastwood now provided himself, from Mystic River to 2008 Gran Torino. Niehaus won the BMI Film & TV Awards for Heartbreak Ridge (1986), Unforgiven (1992), The Bridges of Madison County (1995), and Space Cowboys (2000).

The most outstanding collaboration between Niehaus and Eastwood related directly to jazz, was the 1988 biographical film on Charlie Parker, Bird from 1988. Besides a Golden Globe for Eastwood as best director, an Academy Award for best sound and many others, the score by Niehaus was nominated for a BAFTA Award, and won 2nd place at the Los Angeles Film Critics Association Awards, shared between Niehaus and Charlie Parker, due to a production process never done before, that had managed to electronically isolate Parkers saxophone solos from original tapes and backed them with new, better sounding stereo recordings.

Lenny Niehaus wrote the music for another jazz related feature, the 1993 TV movie Lush Life, in which Forest Whitaker, who played Charlie Parker in Bird, also starred as a jazz saxophonist. Niehaus won a Primetime Emmy Award for Outstanding Music Composition for a Miniseries, Movie, or a Special. In 2008 he was nominated again for Oprah Winfrey Presents: Mitch Albom's For One More Day.

His work includes Spiritual Jazz Suite, four pieces arranged for brass quartet, Three sets of Christmas Jazz suites (4 pieces in each) and a Christmas Jazz Medley arranged for saxophone quartet, a book of classical saxophone duets, A beginning, intermediate, and advanced methods for the understanding of jazz technique, and a book of jazz saxophone duets exemplifying jazz styles. After many years of not playing his alto saxophone at all, Niehaus returned to performing, reportedly in top form.[15][16][17] He played saxophone as leader of his octet on his 2004 album, Sunday Afternoons At The Lighthouse Cafe.[18]

This article uses material from the article Lennie Niehaus from the free encyclopedia Wikipedia and it is licensed under the GNU Free Documentation License.

Short Break Maël
Update Required To play the media you will need to either update your browser to a recent version or update your Flash plugin.