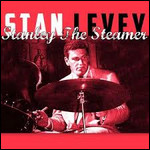 Born Adolph Stanley Levey in Philadelphia, Levey is considered one of the earliest bebop drummers, and one of the very few white drummers involved in the formative years of bebop. He played in Philadelphia with Dizzy Gillespie's group in 1942, at the age of 16. Soon after, he went to New York City, where he and Gillespie worked on 52nd Street with Charlie Parker and Oscar Pettiford.[1]

After his tenure with the Stan Kenton Orchestra he moved to the West Coast in 1954, joining Howard Rumsey, Don Joham and the Lighthouse All-Stars, and was a major influence in West Coast jazz. Though "cool" jazz was common on the West Coast, Levey's crisp, melodic style continued to have more in common with bop than cool, and he inspired every group he ever played in. A right-handed person, Levey played the drums, as if left-handed! Levey has played on thousands of recordings, including those with musicians Dizzy Gillespie, Charlie Parker, Miles Davis, Stan Getz, Ella Fitzgerald, Peggy Lee, Frank Sinatra, Nat King Cole and with bands such as that of Quincy Jones, and Skitch Henderson and The Tonight Show Band.

Levey retired from the music business in 1973 to become a professional photographer. He died at age 79, two months after surgery for cancer of the jaw, in Van Nuys, California.[2] He was buried at the Forest Lawn, Hollywood Hills Cemetery in Los Angeles.

This article uses material from the article Stan Levey from the free encyclopedia Wikipedia and it is licensed under the GNU Free Documentation License.

Kings & Queens Ayu
Update Required To play the media you will need to either update your browser to a recent version or update your Flash plugin.