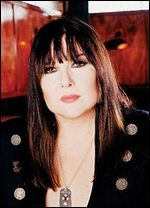 Ann Dustin Wilson (born June 19, 1950) is an American musician, best known as the lead singer and songwriter[1] of the hard rock band Heart. Wilson was listed as one of the "Top Heavy Metal Vocalists of All Time" by Hit Parader magazine in 2006.[2] Wilson has a dramatic soprano vocal range.[3][4][5]

Ann Dustin Wilson was born in San Diego, California.[6] Her father was a major in the U.S. Marine Corps.[7] Due to her father's military career, the Wilson family moved frequently.[8] They lived near American military facilities in Panama and Taiwan before settling in Seattle, Washington, in the early 1960s. To maintain a sense of home no matter where in the world they were residing, the Wilsons turned to music. "On Sunday we'd have pancakes and opera," her sister Nancy Wilson recalled. "My dad would be conducting in the living room. We'd turn it way up and rock. There was everything from classical music to Ray Charles, Judy Garland, Peggy Lee, bossa nova, and early experimental electronic music."[9]

Wilson's family eventually settled in Bellevue, a suburb of Seattle, Washington. In 1968, she graduated from Sammamish High School.[10] Shy because of a stutter, Wilson sought fulfillment in music.[11] In the early 1970s she joined a local band, White Heart, which changed its name to Hocus Pocus, and then in 1974, to Heart.[12]

In 1973, her younger sister Nancy joined Heart, and the band moved to Canada. Heart recorded their first album Dreamboat Annie in Vancouver in 1975; it was released in the United States in 1976, with "Crazy on You" hitting number 35 on the US charts. In 1977, Little Queen was released, and in 1978, Dog & Butterfly. In 1992, Wilson appeared on Alice in Chains' EP Sap; she sang on "Brother", "Am I Inside" and "Love Song". In 1993, Alice in Chains singer Layne Staley contributed to vocals on "Ring Them Bells", a Bob Dylan cover from Heart's album Desire Walks On. In addition, Alice in Chains bassist Mike Inez and touring guitarist Scott Olson appeared on Heart's 2003 release Alive in Seattle.

The Wilson sisters started a recording studio, Bad Animals, in Seattle in the mid-1990s. They formed a side band, The Lovemongers, which performed "The Battle of Evermore" on the 1992 soundtrack to the Cameron Crowe (Nancy's then husband) movie Singles, and later released a four-song EP. The Lovemongers' debut album Whirlygig was released in 1997.

The Hope & Glory version of Led Zeppelin's "Immigrant Song" which is available on Wilson's official MySpace page charted as "the No. 9 most podcasted song of 2007" on the PMC Top10's annual countdown.

On November 22, 2012, Wilson sang an original arrangement of "The Star-Spangled Banner", accompanied by the Dallas Symphony Orchestra, at the beginning of the Thanksgiving Day football game between the Dallas Cowboys and Washington Redskins at Cowboys Stadium in Arlington, Texas. Composer Gary Fry created the arrangement specifically for its premiere performance by Wilson and the DSO.[14]

On October 12, 2017, Ann's first feature film, 'ann wilson / in focus' was released. It features an intimate interview conducted in Ann's home by Criss Cain along with twenty complete live song performances from the 'Ann Wilson of Heart' tour stop in Wilmington, North Carolina on March 21, 2017. The director's cut is now streaming via the 'Ann Wilson of Heart' YouTube channel. [18]

During the 1970s, Wilson was in a relationship with Michael Fisher, the manager of Heart, while Nancy was involved with lead guitarist Roger Fisher, Michael's younger brother.[19] Both couples controlled the band. In 1979, the relationships ended; Ann stated that Michael had fallen in love with another woman and they parted.[20]

As a child, Wilson was bullied for being overweight. She revealed that in the 1970s and into the early 1980s she would starve herself and use diet pills to stay thin. By the time Heart made a comeback in the mid-1980s, Wilson had gained a significant amount of weight. Fearing that Heart's lead singer's figure would compromise the band's image, record company executives and band members began pressuring her to lose weight. In music videos, camera angles and clothes were often used to minimize her size, and more focus was put on more slender guitarist Nancy. Ann stated she began suffering from stress-related panic attacks due to the negative publicity surrounding her weight. She underwent a weight-loss surgery called "adjustable gastric band" in January 2002[22] after what she calls "a lifelong battle" with her weight.

One day in November 2009, Ann collapsed. Her sisters went with her to the doctor, where Ann got the news that she had liver problems resulting from drinking. While she had stopped using drugs at the birth of her daughter, she had increased her drinking; Nancy and other family members and crew had been concerned for some time. They planned to confront her about it, and had even built a break into the tour to allow for treatment. Ann ultimately got therapy on her own.[23] In the band's 2012 autobiography, Wilson revealed her past struggles with cocaine and alcoholism. She stated she has been sober since 2009.[24]

Wilson married Dean Wetter in April 2015. The pair dated briefly in the 1980s before rekindling their relationship years later.[25]

This article uses material from the article Ann Wilson from the free encyclopedia Wikipedia and it is licensed under the GNU Free Documentation License.

Désenchantée Mylène Farmer
Update Required To play the media you will need to either update your browser to a recent version or update your Flash plugin.