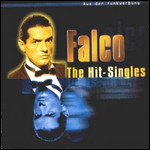 Johann (Hans) Hölzel (19 February 1957 6 February 1998), better known by his stage name Falco, was an Austrian pop and rock musician and rapper. He had several international hits: "Rock Me Amadeus", "Der Kommissar", "Vienna Calling", "Jeanny", "The Sound of Musik", "Coming Home (Jeanny Part 2)" and posthumously, "Out of the Dark". "Rock Me Amadeus" reached No. 1 on the Billboard charts, making him the only artist whose principal language was German to score a vocal number-one hit in the United States (Bert Kaempfert reached #1 in January 1961 with the instrumental "Wonderland by Night"). His estate claims he has sold 20 million albums and 15 million singles, which makes him the best selling Austrian singer of all time.

Falco began to show signs of unusual musical talent very early. As a toddler, he was able to keep time with the drumbeat in songs he heard on the radio. He was given a baby grand piano for his fourth birthday; a year later, his birthday gift was a record player which he used to play music by Elvis Presley, Cliff Richard, and the Beatles. At age five, he auditioned for the Vienna Music Academy, where it was confirmed that he had perfect pitch.

In 1963, Hölzel began his schooling at a Roman Catholic private school; four years later, at age ten, he switched to the Rainer Gymnasium in Vienna. Shortly thereafter his father Alois Hölzel left the family. From then on, Hölzel was raised by his mother and grandmother and remained very close to them all his life.

He left school at sixteen in 1973 due to absenteeism. His mother then insisted he begin an apprenticeship with the Austrian employee pension insurance institute, but this only lasted a short time. At seventeen, he volunteered for eight months of military service with the Austrian army.

He entered the Vienna Music Conservatory in 1977, but left after one semester to "become a real musician". For a short time, he lived in West Berlin while singing in a jazz-rock band and exploring the club scene. When he returned to Vienna he was calling himself "Falco", reportedly in tribute to the East German ski jumper Falko Weißpflog (he changed one letter to make the name more international), and playing in the Austrian bands Spinning Wheel and Hallucination Company.[1]

En route to becoming an international rock star in his own right, he was bass player in the Austrian hard rock-punk rock band Drahdiwaberl (from 1978 until 1983). With Drahdiwaberl he wrote and performed the song "Ganz Wien" ("All Vienna"), which he would also include on his debut solo album, Einzelhaft (Solitary Confinement ). He also played bass with the space disco band Ganymed in 1981.

Falco's first hit was "Der Kommissar" ("The Commissioner") from the 1982 album Einzelhaft. A German language song about drug consumption that combines rap verses with a sung chorus, Falco's record was a number-one success in many countries but failed to break big in the US. The song, however, would prove to have a life of its own in two English-language versions. British rock band After the Fire recorded an English cover version, somewhat loosely based on Falco's lyrics and also called "Der Kommissar" (with "uh-oh", "ja, ja", "alles klar Herr Kommissar" and the shout "cha" the only other lyrics held over from the original). This time, the song shot to number five in the United States (their only major hit there) in 1983, though it failed to crack the UK Top 40. That same year, American singer Laura Branigan recorded a version of the song with new English lyrics under the title "Deep In The Dark" on her album Branigan 2.

After a second album, Junge Römer (Young Romans) failed to provide a repeat to his debut single's success (outside of Austria and Germany, where the album topped the charts), Falco began to experiment with English lyrics in an effort to broaden his appeal, and chose a new production team. The result would be the most popular album and single of his career.

Falco recorded "Rock Me Amadeus" inspired in part by the Oscar-winning film Amadeus, and the song became a worldwide hit in 1986. This time, his record reached No. 1 in the US and UK, bringing him the success that had eluded him in that major market a few years earlier. The song remained in the top spot of the Billboard Hot 100 for three weeks and his album, Falco 3 peaked at the number three position on the Billboard album charts reached number six in the Billboard Top R&B Singles Chart (once called the "Black Singles" chart), becoming the first major hit by a white artist since Blondie's chart-topping "Rapture" five years earlier. Falco 3 peaked at number 18 on the Top R&B/Hip-Hop Albums charts. Ultimately, "Rock Me Amadeus" went to the No. 1 spot in over a dozen countries including Japan. Follow-up single "Vienna Calling" was another international pop hit, peaking at No. 18 of the Billboard Charts and No. 17 on the US Cash Box Charts in 1986. A double A-side 12" single featuring remixes of those two hits peaked at No. 4 on the US Dance/Disco charts.

"Jeanny", the third release from the album Falco 3, brought the performer back to the top of the charts across Europe. Highly controversial when it was released in Germany and the Netherlands, the story of "Jeanny" was told from the point of view of a possible rapist and murderer. Several DJs and radio stations refused to play the ballad, which was ignored in the US, though it became a huge hit in many European countries, and inspired a sequel on his next album.

In 1986, the album Emotional was released, produced by Rob and Ferdi Bolland (Bolland & Bolland). Songs on the album included "Coming Home (Jeanny Part 2)," "The Kiss of Kathleen Turner", and "Kamikaze Capa" which was written as a tribute to the late photojournalist Robert Capa. "The Sound of Musik" was another international success, and a Top 20 US dance hit, though it failed to make the US pop charts. . In 1987 he went on the "Emotional" world tour ending in Japan. In the same year he sang a duet with Brigitte Nielsen, "Body Next to Body"; the single was a Top 10 hit in the Germanic countries. The album Wiener Blut (Viennese Blood) was released in 1988 but it did not get much publicity outside Germany and Austria.

In 1990, he wrote a song about Cindy Crawford and Tatjana Patitz, "Tanja P. not Cindy C.", which appeared on the album Data de Groove.

After 1986 there were a number of European hits, but Falco was rarely heard in the US and the UK. His 1992 comeback attempt, the album Nachtflug (Night Flight) including the song "Titanic", was successful in the German speaking territories but failed to chart internationally.

Falco died of severe injuries received on 6 February 1998, just a few days before his 41st birthday, when his Mitsubishi Pajero collided with a bus on the road linking the towns of Villa Montellano and Puerto Plata in the Dominican Republic. It was later determined that the bus driver was speeding, for which the driver served three years in prison. At the time of Falco's death, he was planning a comeback. He was buried in the Zentralfriedhof (Central Cemetery) in Vienna, Austria.[2]

In 1998, Rob and Ferdi Bolland (Dutch producers and co-writers of about half of Falco's albums) released the EP Tribute to Falco under the name The Bolland Project feat. Alida. The title track featured samples of Falco's music; the other tracks were "We Say Goodbye" and "So Lonely".

The film Falco Verdammt, wir leben noch! was released in Austria on 7 February 2008, ten years and one day after Falco's death. This title is also the name of a posthumously-released album by Falco which translates to "Damn, we're still alive!" Written and directed by Thomas Roth, the movie features musician Manuel Rubey as adult Johann 'Falco' Hölzel.[3] The end credits include the line "With love, Ferdi & Rob", his frequent collaborators the Bollands.

Falco's good friend Niki Lauda named one of the Boeing airplanes in his Lauda Air fleet "Falco" after the singer.[4]

Although "Der Kommissar" saw nearly contemporaneous and fairly straightforward mainstream covers including the loose translation by After The Fire and the reinterpretation by Laura Branigan, both in 1982/1983, Falco's song "Rock Me Amadeus" has seen more frequent use. The track has been sampled by groups including the Bloodhound Gang, who also refer to Falco in their 1999 song "Mope", and by German rapper Fler in "NDW 2005" from Neue Deutsche Welle.

"Rock Me Amadeus" has been frequently used as a comedic source in a number of parody versions, films, television shows, and commercials. In 1985 a parody version of "Rock Me Amadeus" entitled "Rock Me Jerry Lewis" was credited to Bud Latour and fellow Phoenix, Arizona disc jockey, Mike Elliott. "Rock Me Jerry Lewis" climbed to Number 1 on The Dr. Demento's Funny Five chart and grew to a notoriety that prompted mentions and airplay on Casey Kasem's Top 40 Radio Show as well as a call from Jerry Lewis himself. Furthermore, Jerry Lewis would begin to use the song at his personal appearances and stage shows. While in Phoenix, Arizona for a muscular dystrophy benefit at a bowling alley, Jerry Lewis invited 'Bud' LaTour and Mike Elliott to bowl with him. He was kind enough to sign 500 copies of the "Rock Me Jerry Lewis" 7" record.

In 1986, "Weird Al" Yankovic parodied the song in his song "Polka Party". In The Simpsons episode "A Fish Called Selma" (1996), an offbeat variation is featured in a musical presentation of Planet of the Apes with the repeated tag of "Amadeus, Amadeus" transferred to "Dr. Zaius, Dr. Zaius". A similar usage appears in another satirical US cartoon series, Family Guy (season 4 episode 6, 2005). The Daily Show with Jon Stewart featured a parody, "Iraq Me Dave Petraeus", as a musical intro to a briefly recurring segment involving the US General's doctrine regarding the war in 2007/2008.[5] In 2012, Boston Red Sox Catcher Jarrod Saltalamacchia used the song as his at-bat song.[6]

A later episode of The Simpsons, "Behind the Laughter", features Willie Nelson saying, "Thank you, Taco, for that loving tribute to Falco," within another fictional tribute. Falco has been referenced in the US satirical cartoon series American Dad! and The Tick. In an episode of Family Guy entitled "German Guy", Falco's song "Der Kommissar" was used when Franz Gutentag made a Chris look-alike puppet and it sang and danced to the song. Chris later states "that was the German-est thing I've ever seen", although Falco was Austrian.

The 2009 film Adventureland features "Rock Me Amadeus" multiple times as part of an amusement park's background music, to the eventual disdain of its denizens. The original track is featured in humorous situations in commercials for the Subaru Impreza sedan and E-Trade financial services (2008).

This article uses material from the article Falco (musician) from the free encyclopedia Wikipedia and it is licensed under the GNU Free Documentation License.

It's A Sin Pet Shop Boys
Update Required To play the media you will need to either update your browser to a recent version or update your Flash plugin.