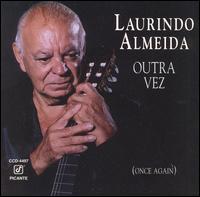 Laurindo Almeida (September 2, 1917 – July 26, 1995) was a Brazilian virtuoso guitarist and composer who made many recordings of enduring impact in classical, jazz and Latin genres. He is widely credited, with fellow artist Bud Shank, for creating the fusion of Latin and jazz which came to be known as the bossa nova. Almeida was the first artist to receive Grammy Awards for both classical and jazz performances. His discography encompasses more than a hundred recordings over five decades.[2]

Laurindo Jose de Araujo Almeida Nobrega Neto was born in the village of Prainha, Brazil near Santos in the state of São Paulo.[2]

Born into a musical family, Almeida was a self-taught guitarist. During his teenage years, Almeida moved to São Paulo, where he worked as a radio artist, staff arranger and nightclub performer.[3] At the age of 19, he worked his way to Europe playing guitar in a cruise ship orchestra. In Paris, he attended a performance at the Hot Club by Stephane Grappelli and famed guitarist Django Reinhardt, who became a lifelong artistic inspiration.[4]

Returning to Brazil, Almeida continued composing and performing. He became known for playing both classical Spanish and popular guitar. He moved to the United States in 1947; a trip financed when one of his compositions, a song known as "Johnny Peddler" became a hit recorded by the Andrews Sisters. In Los Angeles, Almeida immediately went to work in film studio orchestras.[2]

Early career in the United States

Almeida was first introduced to the jazz public as a featured guitarist with the Stan Kenton band in the late 1940s during the height of its success. According to author Michael Sparke, Almeida and his fellow Kenton bandmember drummer Jack Costanzo "endowed the music of Progressive Jazz with a persuasive Latin flavor, and the music is enriched by their presence."[5] Famed Kenton arranger Pete Rugolo composed "Lament" specifically for Almeida's cool, quiet sound,[6] and Almeida's own composition "Amazonia" was also featured by the Kenton orchestra. Almeida stayed with Kenton until 1952.

Other observers note that the beat, harmonic stamp, and economy of expression were different than the bossa nova, giving Almeida and Shank's recording "...a different mood and sound...certainly valuable in its own right."[8]

Almeida's classical solo recording career on Capitol Records began in 1954 with The Guitar Music of Spain. Almeida made a series of highly successful classical recordings produced by Robert E. Myers.[6] Among Almeida's notable classical recordings is an album widely considered to be the first classical crossover album, the 1958 Grammy winner Duets with Spanish Guitar with mezzo soprano Salli Terri and flutist Martin Ruderman. In this recording, Almeida arranges standard classical and folk repertoire through the prism of several Latin musical forms, including the modenha, charo, maracatu and boi bumba.[8] The result, according to Hi-Fi and Music Review was "...a prize winner in my collection. Laurindo Almeida's guitar playing captures the keen poignancy and rhythmic élan of Brazilian music with superb assurance and taste...".[9] The recording was nominated for two Grammy Awards and won for Best Classical Engineering for Sherwood Hall III at the first Grammy Awards ceremony. In her recent memoir Simple Dreams, singer Linda Ronstadt discusses Duets With the Spanish Guitar and notes that her aunt, the renowned Spanish singer Luisa Espinel was a friend of vocalist Salli Terri: "Knowing I wanted to sing, Aunt Luisa had sent me a recording, Duets with the Spanish Guitar, which featured guitarist Laurindo Almeida dueting alternately with flautist Martin Ruderman and soprano Salli Terri. It became one of my most cherished recordings."[10]

In 1964, Almeida again expanded his recording repertoire by joining forces with the Modern Jazz Quartet on Collaboration (Atlantic Records), which combined classical with jazz, called "chamber jazz." Almeida also toured with the MJQ, both in the 1960s and again in the 1990s.[2]

In addition to his recording achievements, Almeida continued his work with the film studios throughout his career, playing guitar, lute, mandolin and other instruments for more than 800 motion picture and television soundtracks (such as The High Chaparral and "The Gift," an episode of The Twilight Zone). Almeida made cameo appearances in the 1954 movie A Star is Born and on a 1959 episode of Peter Gunn titled "Skin Deep". His performing credits included major motions pictures such as Good-bye, My Lady (1956), Funny Girl (1968), and The Godfather (1972). He composed the complete film scores for ten motion pictures and portions for hundreds of others, including Charles and Ray Eames's 1957 film Day of the Dead.[6] He also underscored and performed for Clint Eastwood's Unforgiven (1992). His final film work was in "The Cat in the Hat" (2003) in which his whistling cover of "The Girl From Ipanema" is briefly heard. Some articles report Almeida won at least one Oscar award for film composition; however, while he was involved in films that were nominated, he did not receive an Oscar for his film work.

In the 1970s, Almeida reunited with Bud Shank, forming The L.A. Four with Ray Brown and Chuck Flores (later Shelly Manne and then Jeff Hamilton).[12] From 1974 to 1982, the L.A. Four toured internationally and recorded a series of albums for Concord Jazz, including The L.A. Four Scores!, an acclaimed live recording from the 1974 Concord Jazz Festival.[13] In 1980, Almeida joined forces with Charlie Byrd on a series of highly regarded recordings, including Latin Odyssey, Brazilian Soul and Tango.[7] He also recorded with Baden Powell, Stan Getz and Herbie Mann, among others. His guitar trio, Guitarjam, with Larry Coryell and Sharon Isbin played Carnegie Hall in 1988. In the 1990s, Almeida toured again with the Modern Jazz Quartet. In 1992, Concord Records issued Outra Vez, an October, 1991 live recording with bassist Bob Magnusson and drummer Jim Plank; JazzTimes wrote that Outra Vez was "...a testament to his enduring genius as a concert guitarist, composer and arranger".[14]

Laurindo Almeida was nominated for sixteen Grammys and received the award five times:

In 1992, he was honored with the Latin American & Caribbean Cultural Society Award for "his illustrious career as a performer and composer and his dedicated promotion of the music of the Americas." Shortly before his death, the Brazilian government honored Almeida, awarding him the "Comendador da Ordem do Rio Branco." In 2010, Fanfare inducted his 1958 Duets with Spanish Guitar into its Classical Recording Hall of Fame.[15]

Almeida was teaching, recording and performing until the week before his death of leukemia on July 26, 1995, at age 77 in Los Angeles, California.[2]

Laurindo Almeida's archives are housed at the US Library of Congress. He composed more than 1000 separate pieces, including 200 popular songs. In 1952 Almeida formed his own publishing company, Brazilliance, which has been influential in the dissemination of Latin American music. As described by authors Chris McGowan and Ricardo Pessanha, Laurindo Almeida was "...an artist known for his harmonic mastery, subtle dynamics, rich embellishments and adept improvisatory skills in a variety of idioms".[8]

In 2004 Almeida's guitar work from his version of The Lamp Is Low was sampled by the late Japanese DJ/Producer Nujabes for the song Aruarian Dance which features on the soundtrack to the Anime series Samurai Champloo.

This article uses material from the article Laurindo Almeida from the free encyclopedia Wikipedia and it is licensed under the GNU Free Documentation License.

Out Of Sight Lina Button
Update Required To play the media you will need to either update your browser to a recent version or update your Flash plugin.