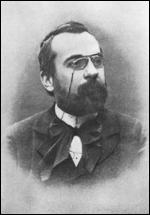 Louis-Charles-Bonaventure-Alfred Bruneau (3 March 1857, in Paris – 15 June 1934, in Paris) was a French composer who played a key role in the introduction of realism in French opera.

As a youth, Bruneau studied the cello at the Paris Conservatory, and played in the Pasdeloup orchestra. He soon began to compose, writing a cantata, Genevieve de Paris while still a young man. In 1884 his Ouverture heroique was performed, followed by the choral symphonies, Léda (1884), La belle au bois dormant (1886). In 1887, he produced his first opera, Kérim.

The following year, Bruneau met Émile Zola, launching a collaboration between the two men that would last for two decades. Bruneau's 1891 opera Le rêve was based on the Zola story of the same name, and in the coming years Zola would provide the subject matter for many of Bruneau's works, including L'attaque du moulin (1893). Zola himself wrote the libretti for the operas Messidor (1897) and L'Ouragan (1901). Other works influenced by Zola include L'enfant roi (1905), Naïs Micoulin (1907), Les quatres journées (1916), and Lazare (produced posthumously in 1954). Other operatic works by Bruneau contained themes by Hans Christian Andersen (Le jardin du Paris in 1923) and Victor Hugo (Angelo, tyran de Padoue in 1928). Bruneau's orchestral works show the influence of Wagner. His other works include his Requiem (1896) and two collections of songs, Lieds de France and Chansons à danser.

This article uses material from the article Alfred Bruneau from the free encyclopedia Wikipedia and it is licensed under the GNU Free Documentation License.

Reach Out For My Hand Esteban Diaz
Update Required To play the media you will need to either update your browser to a recent version or update your Flash plugin.