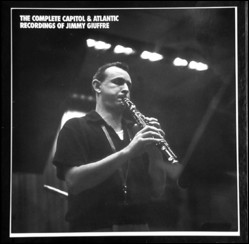 James Peter Giuffre (/ˈdʒuːfri/, Italian pronunciation: [dʒufˈfre]; April 26, 1921 – April 24, 2008) was an American jazz clarinetist, saxophonist, composer, and arranger. He is notable for his development of forms of jazz which allowed for free interplay between the musicians, anticipating forms of free improvisation.

Jimmy Giuffre was born in Dallas, Texas, the son of Joseph Francis Giuffre (an Italian immigrant from Termini Imerese, Palermo Province, Sicily) and Everet McDaniel Giuffre. Giuffre was a graduate of Dallas Technical High School and North Texas State Teachers College (University of North Texas College of Music). He first became known as an arranger for Woody Herman's big band, for which he wrote "Four Brothers" (1947). He would continue to write creative, unusual arrangements throughout his career. He was a central figure in West Coast jazz and cool jazz.[1] He became a member of Howard Rumsey's Lighthouse All Stars in 1951 as a full-time All Star along with Shorty Rogers and Shelly Manne. The Lighthouse in Hermosa Beach, California became the focal point of West Coast jazz in the 1952–53 period. It was during this time when he collaborated with Rogers on many of the successful charts written for the All Stars. The first recording released by the Lighthouse All Stars was a not so West Coast jazz chart named "Big Boy" which he and Rogers had put together.[2] It was an instant hit in Los Angeles. He left the band in September 1953 and became a member of Shorty Rogers and His Giants before going solo. At this point in his career, Giuffre predominantly played tenor and baritone saxophone.

His first trio consisted of Giuffre, guitarist Jim Hall and double bassist Ralph Peña (later replaced by Jim Atlas). They had a minor hit in 1957 when Giuffre's "The Train and the River" was featured on the television special The Sound of Jazz. This trio explored what Giuffre dubbed "blues-based folk jazz". This same special matched Giuffre with fellow clarinetist Pee Wee Russell for a leisurely jam session simply titled "Blues".

When Atlas left the trio, Giuffre replaced him with valve trombonist Bob Brookmeyer. This unusual instrumentation was partly inspired by Aaron Copland. The group can be seen performing "The Train and the River" in the film Jazz on a Summer's Day filmed at the 1958 Newport Jazz Festival.

In 1959, Giuffre led a trio featuring Hall and bassist Buddy Clark on a concert in Rome, Italy, sharing the bill with Gerry Mulligan's band.

In 1961, Giuffre formed a new trio with piano player Paul Bley and Steve Swallow on double bass, and also began to focus his attention largely on the clarinet. This group received little attention while active, but were later cited by some critics, fans and musicians as among the most important groups in jazz history.[3] They explored free jazz not in the loud, aggressive mode of Albert Ayler or Archie Shepp, but with a hushed, quiet focus more resembling chamber music.[4] The trio's explorations of melody, harmony and rhythm are still as striking and radical as any in jazz. Thom Jurek has written that this trio's recordings are "one of the most essential documents regarding the other side of early-'60s jazz."[5]

Giuffre, Bley and Swallow eventually explored wholly improvised music, several years ahead of the free improvisation boom in Europe. Jurek writes that Free Fall, their final record, "was such radical music, no one, literally no one, was ready for it and the group disbanded shortly thereafter on a night when they made only 35 cents apiece for a set."[6]

During the 1970s, Giuffre was hired by New York University to head its jazz ensemble, and to teach private lessons in saxophone and music composition.

Into the 1990s, Giuffre continued teaching and performing. He recorded with Joe McPhee, and revived the trio with Bley and Swallow (though Swallow had switched to bass guitar, giving the group a different sound). Through the mid-1990s Giuffre taught at the New England Conservatory of Music. He suffered from Parkinson's disease and in his last years he no longer performed. Giuffre died of pneumonia in Pittsfield, Massachusetts, on April 24, 2008, two days short of his 87th birthday.

As sideman, arranger and/or composer

This article uses material from the article Jimmy Giuffre from the free encyclopedia Wikipedia and it is licensed under the GNU Free Documentation License.