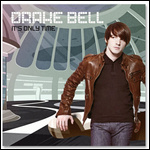 Jared Drake Bell[1] (born June 27, 1986),[2] better known as Drake Bell, is an American actor, musician, singer-songwriter, comedian, television personality, voice actor, record producer, and occasional television director. He began his career as an actor in the early 1990s, with an appearance on Home Improvement. Bell also appeared in several commercials.[3] He appeared on The Amanda Show and became well-known among young audiences for his role on the series Drake & Josh while playing Drake Parker. Recently, Bell starred in A Fairly Odd Christmas on Nickelodeon. Bell is also the voice of Peter Parker / Spider-Man in the animated series Ultimate Spider-Man on Disney XD. Bell appeared on ABC's new reality TV series Splash.

In addition to acting, Bell had a growing career as a musician, and co-wrote and performed the theme song to Drake & Josh, entitled "Found a Way". In 2005 he independently released his debut album, Telegraph. His second album, It's Only Time, was released in 2006 after signing with Universal Motown Records and debuted at #81 on the Billboard 200, selling over 7,500 copies its first week of release. Bell released an EP in 2011 called A Reminder. Bell's third album, "Ready, Steady, Go!" will be released on April 22, 2014 and it will be his first album release under the record label Surfdog Records.

Bell was born and raised in Santa Ana, California, the son of Robin Dodson, a professional billiards player, and Joe Bell. He has three older brothers, Joey, Robert and Travis, and one older sister, Kellie.[1] His cousin is Tampa Bay Rays closer Heath Bell.[4]

Bell first appeared on television in a 1994 episode of Home Improvement. He appeared in the film Jerry Maguire (1996), and had a small role in the Seinfeld episode "The Frogger" in 1998. In 1999, he acted in a commercial for Pokémon Red and Blue and in the movie Dragon World: The Legend Continues. In 2000, he was nominated for a Young Artist Award for his role as Cage Redding in the made-for-television film The Jack Bull. He received his first guitar lessons from Roger Daltrey when he starred with him in the 2001 movie, Chasing Destiny. During the early 2000s (decade), Bell was a featured performer on The Amanda Show and made a guest appearance on the series The Nightmare Room.

In 2004 Bell was cast as Drake Parker alongside real life best friend and former Amanda Show costar Josh Peck on the Nickelodeon series Drake & Josh. During this time period, he made a guest appearance as himself on Nickelodeon's Zoey 101 and won the first of three consecutive "Blimp Awards" at the Nickelodeon Kids' Choice Awards in the "Favorite TV Actor" category. In 2005, Bell co-starred alongside fellow Drake & Josh actress Miranda Cosgrove with Dennis Quaid in Yours, Mine and Ours. Telegraph is Drake Bell's first studio album. The album includes 12 tracks. His song, "Found a Way" (featured as the theme song for Drake & Josh) is also included on the show's soundtrack. Telegraph, which was released independently on September 27, 2005 and subsequently re-released on August 7, 2007. Bell's song "Highway to Nowhere" was performed on an episode of Zoey 101. "Highway to Nowhere" is included on the Drake & Josh soundtrack and Bell's album "Telegraph". Drake Bell's song "Don't Preach" was played on an episode of Drake & Josh. In 2005, Bell performed with Hawk Nelson in a video for the Hawk Nelson song called "Bring 'Em Out," which was featured in the movie Yours, Mine and Ours. Bell and then-band-mates Michael Corcoran (Backhouse Mike) and C.J. Abraham (The Super Chris).

In 2006, Bell signed with Universal Motown. He released his first single, "I Know", on October 17, 2006. The video for "I Know" was filmed in October 2006. Bell's second album, It's Only Time, was released on December 5, 2006 and reached Number 81 on Billboard's Top 200.[5] On October 16, 2007, the Radio Disney single edit version of his song "Makes Me Happy", was released on iTunes. This was the second single for Bell's album It's Only Time. He also wrote with band-mates Michael Corcoran (Backhouse Mike), and C.J. Abraham (The Super Chris), and sang the theme song for the show iCarly, "Leave It All to Me," with Miranda Cosgrove. The music video for the song premiered on May 24, 2008. Bell has recorded a theme song featuring Sara Paxton for his movie Superhero Movie called "Superhero! Song". He performed some Christmas songs in the Merry Christmas, Drake & Josh movie. A DVD entitled Drake Bell In Concert was released on December 16, 2008. The video was unable to crack the 2008 or 2009 Top 100.[6] The DVD contains footage of him and his band live on stage while they toured in Mexico, in October 2008. It also features 2 new songs and five covers, all of which are exclusive to the DVD.[7] In the spring, Bell had a starring role in the comedy spoof film Superhero Movie. In August 2008, he co-starred in the comedy College, which was shot on location in New Orleans. Bell also starred in Merry Christmas, Drake & Josh alongside Josh Peck, which began production in July 2008, and premiered on December 5, 2008.

In 2010, he made a cameo appearance as Drake Parker in an iCarly episode entitled "iBloop". He starred as Timmy Turner in the live-action TV-movie adaptation of its hit animated series The Fairly Odd Parents, A Fairly Odd Movie: Grow Up, Timmy Turner!, released in 2011[8] and reprised his role in the 2012 sequel, A Fairly Odd Christmas. A behind-the-scenes video of the making of the music video for a new song "Our Love" was uploaded on Bell's Official YouTube Channel in 2010. The official music video for "Our Love" appeared on YouTube soon after. In 2010 also, Bell released a video showing him and Toby Gad working on a new song "Nevermind". In March 2011, Bell released a 1:00 clip of the music video for a new song "Terrific", with a sneak preview of the studio version of the song. On May 18, 2011, an official music video for the new song "You're Not Thinking" was released on YouTube, the video already airing heavily in Latin and South America (MTV Mexico Top 10). A new single, "Terrific", was released on June 14, 2011, and was also included on an EP titled A Reminder, released on June 28, 2011, also featuring the songs "Youre Not Thinking", "Big Shot" and "Speak My Mind".[9] The EP was produced by John Fields, who previously worked with Rooney, Jimmy Eat World, Selena Gomez, the Jonas Brothers, and Bleu. Bell said he decided to release A Reminder because he hasn't put out new music in a few years and "a full album will probably not happen until next year."[9] [10] Bell was cast as Spider-Man in the animated TV series: Ultimate Spider-Man based on the comic book of the same name. He later reprised the role in The Avengers: Earth's Mightiest Heroes, replacing Josh Keaton who originally recorded his role for the series. He was also in the 2012 Nickelodeon movie Rags as Shawn. In 2013, Bell participated in the first season of the ABC reality TV series Splash.

On July 31, 2012, Bell announced via Twitter that he had signed a new record deal and that an album was in the works.[11] On August 10, 2012, he tweeted "My new album is going to be a complete concept record. Getting in a time machine and going back to the 40's and 50's".[12] On August 23, 2012 Bell revealed that his third album will be recorded under Surfdog Records, and will be produced by the president of Surfdog Records, Dave Kaplan.[13] On January 28, 2014, Bell released a single from the upcoming album called "Bitchcraft".[14] It was announced recently on Surfdog's website, in a post about an article published on 4 February 2014 on examiner.com about "Bitchcraft" that the album will be released on April 22, 2014.[15]

On December 29, 2005, Bell was involved in a car accident on Los Angeles's Pacific Coast Highway. He was driving with a friend when a truck ran a red light and caused a head-on collision. This resulted in a fractured neck, a fractured back, a jaw broken in three places, seven missing teeth and several facial lacerations.[16]

Bell has described his music as being heavily influenced by The Beatles and The Beach Boys, with the Beatles being his main influence.[20] He says that three of his other influences are Elvis Presley, Buddy Holly,[21] and Elvis Costello.

This article uses material from the article Drake Bell from the free encyclopedia Wikipedia and it is licensed under the GNU Free Documentation License.

Swan Bellamy Brothers & Gölä
Update Required To play the media you will need to either update your browser to a recent version or update your Flash plugin.