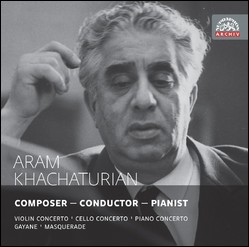 Aram Khachaturian (Armenian: ; Russian: )[Note 1] (June 6 [O.S. May 24] 1903May 1, 1978) was a Soviet Armenian composer.[1] Alongside with Sergei Prokofiev and Dmitri Shostakovich, Khachaturian is sometimes dubbed as one of the three "titans" of Soviet music.[2] Khachaturian's works were often influenced by classical European music and Armenian folk music.[3][4]

Born in Tiflis (Georgia) to a poor Armenian family from Nakhichevan (Azerbaijan), Khachaturian moved to Moscow at the age of 19. He graduated from the Moscow Conservatory in 1934.

Khachaturian is most famous for the Adagio of Spartacus and Phrygia from his ballet Spartacus, and for the "Sabre Dance" from his ballet Gayane and the adagio from the same ballet, much used in films and TV series around the world.

Aram Khachaturian was born in Tiflis, Russian Empire (now Tbilisi, Georgia) to a poor Armenian family.[5] His father, Egia (Ilia) Khachaturian, was born in Upper Aza village near Ordubad in Nakhichevan and moved to Tiflis at the age of 13 and became the owner of the bookbinder's shop at 25. His mother, Kumash Sarkisovna, from Lower Aza, also a village near Ordubad. Khachaturian's parents were engaged before knowing each other, when Kumash was 9 and Ilia was 19. They had 5 children, one daughter and four sons, of whom Aram was the youngest.[6]

In his youth, he was fascinated by the music he heard around him, but at first he did not study music or learn to read it.

In 1920, when Armenia was declared a Soviet republic, Khachaturian joined a propaganda train touring Armenia, populated by Georgian-Armenian artists. The following year he travelled to Moscow to join his brother, the stage director of the Second Moscow Art Theatre.[7] Although he had almost no musical education, Khachaturian showed such great talent that he was admitted to the Gnessin Institute where he studied cello under Sergey Bychkov, and later Andrey Borysyak.[8][9] In 1925 Mikhail Gnessin started a composition class at the Gnessin Institute, which Khachaturian joined.[10]

In 1929, he transferred to the Moscow Conservatory where he studied under Nikolai Myaskovsky (composition) and Sergei Vasilenko (orchestration), graduating in 1934. In the 1930s, he married the composer Nina Makarova, a fellow student from Myaskovsky's class. In 1951, he became professor at the Gnessin State Musical and Pedagogical Institute (Moscow) and the Moscow Conservatory. He also held important posts at the Composers' Union, becoming deputy chairman of the Moscow branch in 1937, then appointed vice-chairman of the Organizing Committee of Soviet Composers in 1939.[11] In 1939 he composed his ballet Happiness, which was later reworked into the ballet Gayane.[12]

The composer joined the Communist Party of the Soviet Union in 1943. However, he temporarily fell from official favour in 1948. It was the Symphonic Poem, later titled the Third Symphony, that officially earned Khachaturian the wrath of the Party. Ironically, Khachaturian wrote the work as a tribute to communism: "I wanted to write the kind of composition in which the public would feel my unwritten program without an announcement. I wanted this work to express the Soviet people's joy and pride in their great and mighty country." Perhaps because Khachaturian did not include a dedication or program notes, his intentions backfired.

Andrei Zhdanov, secretary of the Communist Party's Central Committee, delivered the so-called Zhdanov decree in 1948. The decree condemned Shostakovich, Prokofiev, Khachaturian, and other Soviet composers as "formalist" and "anti-popular." The three named composers had by then already become established as the so-called "titans" of Soviet music, enjoying worldwide reputation as some of the leading composers of the 20th century. Nonetheless, all three accused composers were forced to apologize publicly.

The decree affected Khachaturian profoundly: "Those were tragic days for me... I was clouted on the head so unjustly. My repenting speech at the First Congress was insincere. I was crushed, destroyed. I seriously considered changing professions."

Khachaturian died in Moscow on May 1, 1978, just short of his 75th birthday. He was buried in the Komitas Pantheon in Yerevan, along with other distinguished Armenians who made Armenian art accessible for the whole world.

Khachaturian's works include concertos for violin (sometimes heard in a composer-sanctioned arrangement for flute), cello and piano as well as concerto-rhapsodies for the same instruments. These three concertos were written for the members of a renowned Soviet piano trio that performed together from 1941 until 1963: David Oistrakh, violin; Sviatoslav Knushevitsky, cello; Lev Oborin, piano. The piano concerto originally included an early part for the flexatone, and was his first work to gain him recognition in the West. Khachaturians's three symphonies are varied works, with the third containing parts for fifteen additional trumpets and organ. The composer's largest-scaled works are the ballets Spartacus and Gayane, both of which contain Khachaturian's most well-known music, with Gayane featuring in its final act what is easily his most famous music, the "Sabre Dance".[17]

He also wrote several solo piano works, including the Toccata in E-flat minor, and two albums of music for children (Opp. 62 and 100). Children's Album, Book 1, first published in 1947, contains a smooth and melodic Andantino originally composed in 1926; this piece is commonly known as Ivan Sings, which stems from eight of ten pieces originally being collected as Adventures of Ivan. Children's Album, Book 2, first published in 1964, includes a fugue composed in 1928, and a fast-paced programmatic piece entitled Two Funny Aunties Argued which is sometimes translated as Two Ladies Gossiping. He also composed some film music, and incidental music for plays such as the 1941 production of Mikhail Lermontov's Masquerade, the "Waltz" from which has been performed and recorded frequently.[18]

The cinematic quality of his music for Spartacus was clearly seen when the "Adagio of Spartacus and Phrygia" was used as the theme for a popular BBC drama series, The Onedin Line, during the 1970s.[19] Since then, it has become one of the most popular of all classical pieces for UK audiences. Joel Coen's The Hudsucker Proxy also prominently featured music from Spartacus and Gayane (the "Sabre Dance" included). Gayane's "Adagio" was used in Stanley Kubrick's film 2001: A Space Odyssey and Patriot Games among other films. He was also the composer for the state anthem of the Armenian Soviet Socialist Republic, whose tune is one of the five current choices to become the next state anthem of Armenia. The climax of Spartacus was also used in Caligula[20] and Ice Age: The Meltdown.

Although he was born in what is now Georgia and lived most of his life in Russia, Aram Khachaturian has been an iconic figure for generations of Armenian composers. Most of his works are saturated with centuries-old motifs of Armenian culture.[21] His works paved the way for new styles and daring explorations, although his own style was closely controlled by the regime. Khachaturian encouraged young composers to experiment with new sounds and find their own voices. His colorful orchestration technique, admired by Shostakovich and others in the past, is still noted for its freshness and vitality by modern composers. Khachaturian's influence can be traced in nearly all trends of Armenian classical traditions, whether in symphonic or chamber music. Composers who were particularly influenced by Aram Khachaturian include Alexander Arutiunian, Arno Babajanian, Tigran Mansurian, Edgar Hovhannisyan, Edward Manukyan, Loris Tjeknavorian.

As a conductor, Khachaturian made several commercial recordings, including a 1953 recording of his second symphony with the National Philharmonic Orchestra, a 1963 stereo recording of the symphony with the Vienna Philharmonic, and EMI recordings of suites from Gayane and Masquerade and his violin concerto in 1954 (with David Oistrakh as soloist) with the Philharmonia Orchestra. He later made stereo recordings of the violin concerto (again with Oistrakh), the second symphony in 1977 on the Russian Disc label, and music from Gayane. Some of his recordings have been reissued on CD. Khachaturian's notable students were Aziz El-Shawan, Andrei Eshpai, Vyacheslav Grokhovsky, Mark Minkov, Alexey Rybnikov, Tolib Shakhidi, Mikael Tariverdiev, Enrique Ubieta, Anatol Vieru.

House-Museum of Aram Khachaturian was opened in Yerevan in 1982.

Aram Khachaturian International Competition is held annually in Yerevan since 2003.[23]

This article uses material from the article Aram Khachaturian from the free encyclopedia Wikipedia and it is licensed under the GNU Free Documentation License.