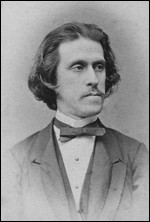 He was born in Mariahilf (now Vienna), the son of Johann Strauss I and Maria Anna Streim, and brother of Johann Strauss II and Eduard Strauss. His father wanted him to choose a career in the Austrian Habsburg military. He studied music with Franz Dolleschal and learned to play the violin with Franz Anton Ries.

He received training as an engineer, and worked for the city of Vienna as an engineer and designer. He designed a horse-drawn revolving brush street-sweeping vehicle and published two textbooks on mathematical subjects.[1] Strauss had talents as an artist, painter, poet, dramatist, singer, composer and inventor.[2]

He joined the family orchestra, along with his brothers, Johann Strauss II and Eduard Strauss[3] in the 1850s. His first published work was called "Die Ersten und Letzten" (The First and the Last). When Johann became seriously ill in 1853 Josef led the orchestra for a while. The waltz-loving Viennese were appreciative of his early compositions so he decided to continue in the family tradition of composing dance music. He was known as 'Pepi' by his family and close friends, and Johann once said of him: "Pepi is the more gifted of us two; I am merely the more popular..."[1]

Josef Strauss married Caroline Pruckmayer at the church of St. Johann Nepomuk in Vienna on 8 June 1857, and had one daughter, Karolina Anna, who was born on March 27, 1858.

Josef Strauss wrote 283 opus numbers. He wrote many waltzes, including: Sphären-Klänge (Music of the Spheres), Delirien (Deliriums), Transaktionen (Transactions), Mein Lebenslauf ist Lieb' und Lust (My Character is Love and Joy), and Dorfschwalben aus Österreich (Village Swallows from Austria), polkas, most famously the Pizzicato Polka with his brother Johann, quadrilles, and other dance music. The waltz The Mysterious Powers of Magnetism (Dynamiden) with the use of minor keys showed a quality that distinguished his waltzes from those of his more popular elder brother.[4] The polka-mazurka shows influence by Strauss, where he wrote many examples like Die Emancipierte and Die Libelle.

Josef Strauss was sickly most of his life. He suffered fainting spells and intense headaches.[5] During a tour in 1870, he fell unconscious from the conductor's podium in Warsaw, while conducting his 'Musical Potpourri', and hit his head. His wife brought him back home to Vienna, to the Hirschenhaus, where he died on 22 July 1870. A final diagnosis only reported a decomposition of blood. There were rumors that he was beaten by drunken Russian soldiers after he allegedly refused to perform music for them one night. His cause of death was not determined, as his widow forbade an autopsy. Originally buried in the St. Marx Cemetery, Strauss was later exhumed and reburied in the Vienna Central Cemetery, alongside his mother Anna.

His dance pieces might have surpassed those of his older brother, had he survived, as Johann was by then concentrating on writing music for operettas and other stage works.

The works of Josef Strauss include:[6]

This article uses material from the article Josef Strauss from the free encyclopedia Wikipedia and it is licensed under the GNU Free Documentation License.