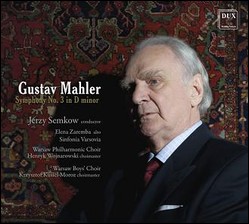 Semkow was born in Radomsko, Poland, but later took French citizenship and resided in Paris. His conducting mentors included Erich Kleiber, Bruno Walter, and Tullio Serafin. He was an assistant conductor with Yevgeny Mravinsky with the Leningrad Philharmonic Orchestra.[1]

Semkow lectured on music at the University of Colorado and conducted master classes at Yale University and New York's Manhattan School of Music. He recorded commercially with the St. Louis Symphony Orchestra for the Vox/Turnabout label.

Semkow died near Lausanne, Switzerland on 23 December 2014, aged 86. His biography was published the same year, authored by Małgorzata Komorowska.

This article uses material from the article Jerzy Semkow from the free encyclopedia Wikipedia and it is licensed under the GNU Free Documentation License.

Love Again Dua Lipa
Update Required To play the media you will need to either update your browser to a recent version or update your Flash plugin.