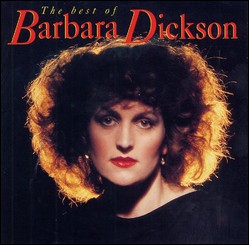 Barbara Ruth Dickson OBE (born Dunfermline, Fife, 27 September 1947)[1] is a Scottish singer whose hits include "I Know Him So Well", "Answer Me" and "January February". Dickson has placed fifteen albums in the UK Albums Chart from 1977 to date, and had a number of hit singles, including four which reached the Top 20 in the UK Singles Chart.[2] The Scotsman newspaper has described her as Scotland's best-selling female singer in terms of the numbers of hit chart singles and albums she has achieved in the UK since 1976.[3]

She is also a two-time Olivier Award-winning actress,[4] with roles including Viv Nicholson in the musical Spend Spend Spend, and she was the original Mrs. Johnston in Willy Russell's long-running musical Blood Brothers.[5] On TV she starred as Anita Braithwaite in Band of Gold.

Dickson's singing career started in folk clubs around her native Fife in 1964. Her first commercial recording was in 1968. Her early work included albums with Archie Fisher, the first of which, The Fate O' Charlie, a collection of songs from the Jacobite rebellions, was released in 1969. Her first solo album was Do Right Woman in 1970.

She became a well-known face on the British folk circuit of the late 1960s and early 1970s, but changed her career course after meeting Willy Russell. He was at that time a young student running a folk club in Liverpool. He showed Dickson the first draft of what later became the award-winning musical, John, Paul, George, Ringo … and Bert, and asked her to perform the music. The combination of fine writing, a superb cast of young unknowns (including Antony Sher, Bernard Hill and Trevor Eve) and Dickson's idiosyncratic interpretation of Beatles songs made the show hugely successful.[7]

The show's co-producer, Robert Stigwood, signed Dickson to his record label, RSO Records, where she recorded the album Answer Me, arranged and produced by Junior Campbell, the title track becoming a Top 10 hit in 1976. John, Paul, George, Ringo … and Bert also led to her guest residency on The Two Ronnies, which brought Dickson's singing to the attention of more than ten million BBC Television viewers every week.[8]

Andrew Lloyd Webber and Tim Rice also spotted Dickson in John, Paul, George, Ringo … and Bert, and invited her to record "Another Suitcase in Another Hall" from their new musical Evita, which became her second hit in 1977. She contributed two tracks to Scouse the Mouse a children's album (1977) with Ringo Starr and others. Also during the late 1970s, Dickson also contributed backing vocals to two best-selling albums by the Scottish singer-songwriter, Gerry Rafferty: City to City (1978) and Night Owl (1979). Other solo hits including "Caravan Song" and "January February", followed for Dickson in 1980.[9]

An abridged version of the song "Best of Friends", sung by Dickson, was used as the closing theme for Andy Robson, an ITV children's television series broadcast during 1982 and 1983. It was never released commercially.

In 1982, Willy Russell invited Dickson to star in his new musical Blood Brothers in the pivotal role of the mother, Mrs. Johnstone. Although at first reluctant to accept, having never acted before, she accepted and garnered critical acclaim as well as 'Actress of the Year in a Musical' from the Society of West End Theatres in 1984. She has reprised the role many times, the latest being 2004 at the Liverpool Empire Theatre.

Later in 1984, Tim Rice approached Dickson to take part in the cast album recording of the musical Chess, which included the song "I Know Him So Well", a duet sung with Elaine Paige. The song was a worldwide hit, and remained at number one in the UK Singles Chart for four weeks.[2] It is still cited in the Guinness World Records as the best-selling female duet of all-time.[10]

During the 1990s, Dickson appeared in various television dramas including Taggart, Band of Gold and The Missing Postman. The writer and director Chris Bond created a stage show for Dickson in 1996 called The Seven Ages of Woman, which won her the Liverpool Echo 'Actress of the Year Award'. It premiered at the Liverpool Playhouse and toured extensively in 1997 and 1998.

In 1999, Dickson starred in Spend Spend Spend, a new musical by Steve Brown and Justin Greene. The show, based on the rollercoaster life story of pools winner, Viv Nicholson, played in the West End to capacity audiences. For her portrayal of Nicholson, she was awarded 'Best Actress in a Musical' at the 2000 Laurence Olivier Awards. She went on to star in the UK tour of the show.

Further theatre work followed in Friends Like This, the Heather Brothers musical A Slice of Saturday Night and Fame. During 2006, Dickson appeared as the Timekeeper in Alan Ayckbourn and Denis King's fantasy musical play Whenever for BBC Radio 4. She has returned to TV in the BBC daytime drama series Doctors and her episode, "Mama Sings The Blues", was broadcast in March 2008.[11]

In 2003, Dickson worked with Russell again, providing backing vocals for his album Hoovering the Moon. In 2004 The Platinum Collection, featuring some of her most successful recordings, reached number 35 in the UK Albums Chart.[2] Her 2004 album, Full Circle, was produced and arranged by Troy Donockley, and saw Dickson returning to her folk roots. In 2006, she issued a collection of the songs of Lennon, McCartney and Harrison, Nothing's Gonna Change My World.[12]

Dickson's twenty-fourth studio album, Time and Tide, was released in January 2008 featuring a mix of contemporary and folk songs, including "Palm Sunday", which marked Dickson's return to songwriting after a break of almost twenty years. A live DVD, Into the Light, was released to coincide with the release of Time and Tide and included, as well as some of her best-loved hits, several tracks from her new album. A double live CD, Barbara Dickson in Concert, was released in April 2009 and was followed later in the year by her autobiography, A Shirtbox Full of Songs. Between February and March 2011, Dickson undertook a tour of the UK and Ireland to promote her new studio album, Words Unspoken. Arranged and produced by Troy Donockley, the album included tracks such as "Bridge Over Troubled Water", "Jamie Raeburn" and "The Trees They Do Grow High".[13] A tribute album to her friend Gerry Rafferty – To Each And Everyone – The Songs of Gerry Rafferty – was released in September 2013 and her most recent album, 'Winter', a collection of seasonal favourites, was released in time for Christmas 2014.[14]

Dickson is married to Oliver Cookson who works as an Assistant Director in television for the BBC,[15] and has three sons. She and her family live in Edinburgh.[16] She was awarded an OBE in the Queen's New Year Honours in 2002 for her services to Music and Drama.[16]

This article uses material from the article Barbara Dickson from the free encyclopedia Wikipedia and it is licensed under the GNU Free Documentation License.

Deeper Than The Night Thierry Condor
Update Required To play the media you will need to either update your browser to a recent version or update your Flash plugin.