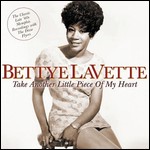 Bettye LaVette (born Betty Jo Haskins, January 29, 1946)[1] is an American soul singer-songwriter who made her first record at sixteen, but achieved only intermittent fame until 2005, with her album I've Got My Own Hell to Raise. Her eclectic musical style combines elements of soul, blues, rock and roll, funk, gospel, and country music.

LaVette was born in Muskegon, Michigan, and raised in Detroit.[1] Unlike many of her contemporaries, she did not begin singing in the church, but in her parents' living room, singing R&B and country and western music. She was signed by Johnnie Mae Matthews, a local record producer. In 1962, aged sixteen, she recorded a single, "My Man — He's a Lovin' Man", with Matthews, which became a Top Ten R&B hit after Atlantic Records bought distribution rights. This led to a tour with rhythm and blues musicians Clyde McPhatter, Ben E. King, Barbara Lynn, and then-newcomer Otis Redding. She next hit the charts with “Let Me Down Easy” on Calla Records in 1965. This led to a brief stint with The James Brown Revue. After recording several singles for local Detroit labels, LaVette signed to the Silver Fox label in 1969. She cut a handful of tracks, including two Top 40 R&B hits: “He Made A Woman Out Of Me” and “Do Your Duty”. The Memphis studio musicians on these recordings have since become known as The Dixie Flyers. In 1972, she signed once again with Atlantic/Atco. She was sent to Muscle Shoals Sound Studio in Alabama to record what was to be her first full-length album. Titled Child of the Seventies, it was produced by Brad Shapiro and featured the Muscle Shoals Rhythm Section, now known as The Swampers, but Atco chose not to issue the album.

The mid 1970s saw a brief stint and two 45s with Epic, and in 1978 she released the disco smash on West End Records "Doin’ The Best That I Can". In 1982, she was signed by her hometown label, Motown, and sent to Nashville to record. The resulting LP (her first album actually issued), titled Tell Me A Lie, was produced by Steve Buckingham. The first single, “Right In The Middle (Of Falling In Love)” hit the R&B Top 40. She briefly gave up recording for a six-year run in the Broadway smash Bubbling Brown Sugar,[1] appearing alongside Honi Coles and Cab Calloway.

After LaVette had played her own personal mono recordings of Child of the Seventies for Gilles Petard, a French soul music collector, he sought the master recordings at Atlantic, whose personnel had previously thought they had been lost in a fire some years back.[2] In 1999, he finally discovered the masters and then licensed the album from Atlantic and released it in 2000 as Souvenirs on his Art and Soul label. At the same time, Let Me Down Easy — Live In Concert was issued by the Dutch Munich label. Both albums sparked a renewed interest in LaVette and in 2003, A Woman Like Me (produced by Dennis Walker) was released. The CD won the 2004 W. C. Handy Award for "Comeback Blues Album of the Year". In an interview, LaVette identified A Woman Like Me as the first album in the second phase of her career and said her 2012 autobiography was named after the album.[3]

After being signed to The Rosebud Agency for live bookings, Rosebud president Mike Kappus brought her to the attention of Anti- Records president, Andy Kaulkin. Upon seeing LaVette perform, Kaulkin signed her to a three-record deal. For the first project, he paired her with Joe Henry, and suggested an album of songs written entirely by women. The resulting CD, I've Got My Own Hell to Raise, was on many critics’ “Best of 2005” lists. The title is taken from the lyrics of Fiona Apple's 1996 hit "Sleep to Dream", which is covered on the album. (Other notable songwriters on the album were Aimee Mann, Sinéad O'Connor, Lucinda Williams, Joan Armatrading, and Dolly Parton.)[4] The album was released by ANTI- Records and produced by Joe Henry.

In 2006, capitalizing on the success of I've Got My Own Hell To Raise and the reviews of her live shows, Child of the Seventies was reissued by Rhino Handmade with some previously unreleased tracks. The album was met with critical acclaim. Varèse Sarabande then issued Take Another Little Piece Of My Heart, a CD containing all of the songs that she cut for Silver Fox and SSS International in 1969 and 1970. The CD included three unreleased tracks as well as two duets with Hank Ballard.

In 2006, she received a “Pioneer Award” from the Rhythm and Blues Foundation.

Her 2007 album, The Scene of the Crime, was mostly recorded at FAME Studios in Muscle Shoals, Alabama, with alt-rockers Drive-By Truckers. The Scene of the Crime was nominated for a Grammy Award for "Best Contemporary Blues Album" and landed on numerous "Best of 2007" lists. LaVette talked about her experiences at Muscle Shoals Sound and FAME in an interview conducted by Edd Hurt in September 2007.[5] Drive-By Truckers frontman Patterson Hood produced the album together with LaVette. The album also features one song co-written by LaVette and Patterson Hood.[4]

In 2008, she received a Blues Music Award for “Best Contemporary Female Blues Singer”. Also in 2008, Reel Music re-issued on CD her Motown LP, Tell Me A Lie. The album contained the original cover design that was not used when the LP was released.

In December 2008 at the Kennedy Center Honors, LaVette sang her version of 1973's "Love, Reign o'er Me" in tribute to Roger Daltrey and Pete Townshend of The Who, who were among the year's honorees. The performance was widely considered one of the event's highlights.[6]

On January 18, 2009, at the We Are One: The Obama Inaugural Celebration at the Lincoln Memorial she performed a duet of Sam Cooke's 1964 song "A Change Is Gonna Come" with Jon Bon Jovi. In April 2009, she shared the stage with Sir Paul McCartney and Ringo Starr at Radio City Music Hall for the David Lynch Foundation's "Change Begins Within" benefit concert promoting teaching Transcendental Meditation to children in inner city schools. In 2009 Sundazed released on CD the album Do Your Duty, which consisted of her eleven solo tracks cut for Silver Fox and SSS International. In June 2009 a six-song EP, Change Is Gonna Come Sessions, was released as a download only.

In 2010, LaVette released Interpretations: The British Rock Songbook, which included unique arrangements and performances of classic songs by artists including The Beatles, The Rolling Stones, The Animals, and Pink Floyd. Included is the complete unedited version of her Kennedy Center Honors performance of The Who's "Love, Reign O'er Me." The CD was critically acclaimed and nominated for a Grammy Award for Best Contemporary Blues Album. She has appeared on National Public Radio's Mountain Stage, World Cafe, All Things Considered and Wait Wait... Don't Tell Me!. She has appeared in a Mississippi Public Broadcasting series, Blues Divas, and is in a film of the same name, both produced by Robert Mugge. She has also appeared on Late Night with David Letterman, Conan, The Late Late Show with Craig Ferguson, The Tonight Show with Jay Leno, Austin City Limits, The Today Show, Good Morning America, and Live from the Artists Den. LaVette also joined the 9th,[7] 10th[8] and 11th[9] annual Independent Music Awards judging panel to assist independent musicians' careers.

LaVette contributed a cover of "Most of the Time" for the album Chimes of Freedom: The Songs of Bob Dylan Honoring 50 Years of Amnesty International. On December 31, 2012, LaVette appeared in the UK on BBC Two's Jools Holland Annual Hootenanny. In 2013 and 2014, LaVette was nominated for a Blues Music Award in the 'Contemporary Blues Female Artist' category.[10][11]

LaVette's album Worthy was nominated for a Grammy Award in 2016 for Best Blues Album.[12]

In 2016, LaVette won a Blues Music Award as the Soul Blues Female Artist of the Year.[13]

On March 6, 2017, she took part in a benefit concert at Carnegie Hall celebrating the music of Aretha Franklin, whom she has known since 1962. She performed a rendition of Franklin's song "Ain't No Way", which she mentioned was written by Franklin to her older sister.[14]

LaVette is married to Kevin Kiley,[2] a recorded music and antiques dealer who is also a singer and musician. They live in West Orange, New Jersey.[15]

This article uses material from the article Bettye LaVette from the free encyclopedia Wikipedia and it is licensed under the GNU Free Documentation License.

Envie d'un manque de problèmes Amandine Bourgeois
Update Required To play the media you will need to either update your browser to a recent version or update your Flash plugin.