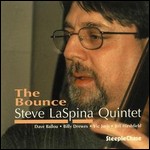 LaSpina was born in Wichita Falls, Texas; his father and grandfather both played in dance bands. He attended the University of Illinois and DePaul University, and first began playing professionally in Chicago in the 1970s. He played with Bunky Green, Larry Novak, Joe Daley (197579), and Chet Baker (1978). In 1978 he also began working with Marian McPartland, with whom he would collaborate until 1986. He moved to New York City in 1979 and played with Mel Lewis's orchestra (197882), Stan Getz (1986-87), Jim Hall (from 1988), Andy LaVerne (from 1989), and Benny Carter (latter half of the 1990s). Aside from these associations, LaSpina has played with Toots Thielemans, Joe Williams, Dave Liebman, Richie Beirach, Bob Brookmeyer, Al Cohn, Zoot Sims, Pat Martino, and Tommy Flanagan. He has taught bass and improvisation at New York University and the College of St. Rose. Is currently on the faculty at William Paterson University.

LaSpina has recorded extensively as a leader for Steeplechase Records since the early 1990s.

This article uses material from the article Steve LaSpina from the free encyclopedia Wikipedia and it is licensed under the GNU Free Documentation License.

Put A Little Love In Your Heart Annie Lennox & Al Green
Update Required To play the media you will need to either update your browser to a recent version or update your Flash plugin.