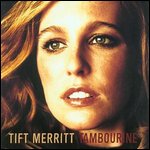 Catherine Tift Merritt (born January 8, 1975) is an American singer-songwriter, musician and North Carolina native. With her longtime band, she has built what has been called a "unique" and critically acclaimed body of work of "sonic short stories and poignant performances."[1] She has been compared to artists like Joni Mitchell[2] and Emmylou Harris.[3]

Merritt has released five studio albums to date: two for Lost Highway Records, two for Fantasy Records, and one for Yep Roc Records. Her live albums so far are Home Is Loud released in 2005 and Buckingham Solo released in 2009.

Merritt was born in Houston but her family moved to Raleigh, North Carolina soon after. Her father taught her guitar chords and how to play piano by ear to Percy Sledge and Bob Dylan songs, and she sang harmonies with him as a child.[4] His eclectic record collection of soul, folk, R&B, rock, and country music records influenced her both then and later; she credits his "genreless" taste with influencing her to write and perform without regard to genre herself.[5]

In her early twenties, though she had performed solo in public, Merritt has said she decided she was better suited for writing short stories. She enrolled at the University of North Carolina at Chapel Hill to study creative writing. There, she met Zeke Hutchins, whose band had just taken a hiatus and who had decided instead to become a school teacher. "With his encouragement and a big box of LPs from the 1970s," Merritt and Hutchins agreed to form a band.[6] Hutchins set up his drum kit in the kitchen of the farmhouse where Merritt lived, and they practiced songs at her piano.

Merritt began her professional career with her band The Carbines playing small clubs in Chapel Hill and Raleigh such as The Cave, Cat's Cradle, and the front porch of the General Store in Bynum, NC.[7] In 1998, The Carbines released a 7-inch single "Jukejoint Girl" b/w "Cowboy". In 1999, Merritt made a guest appearance on a seven-song EP on the by Yep Roc label with the Two Dollar Pistols, led by John Howie, Jr. The record was called The Two Dollar Pistols with Tift Merritt. The EP featured two original tunes and five cover songs.[8]

In 2000, she won MerleFest's Chris Austin Songwriting Contest,[9] found a manager, and signed a contract with Lost Highway Records.

In 2002, Merritt released her debut album, Bramble Rose, containing eleven original songs recorded with her long-time band and produced by Ethan Johns. The record landed on the top ten lists for both Time and The New Yorker, and was called the best debut of the year in any genre by the Associated Press.[10] A song from the album, "Trouble Over Me", was featured in writer Nick Hornby's 31 Songs.[11] While touring to promote Bramble Rose, Merritt opened for fellow North Carolinian Ryan Adams, who had helped her secure her first management and record contracts.[12]

Her follow-up release, 2004's Tambourine, was produced by George Drakoulias and featured backing by Benmont Tench, Mike Campbell (of Tom Petty and the Heartbreakers), Neal Casal and Don Heffington (of Emmylou Harris's Hot Band and Lone Justice). Tambourine was honored with a 2004 Grammy Award for Best Country Album nomination, though its sound was frequently described in quite different terms, such as "rock-soul throwdown".[13] In 2005, Merritt and Tambourine were also nominated for three Americana Music Awards by the Americana Music Association: Album of the Year, Artist of the Year, and Song of the Year for "Good Hearted Man".[14] During the tour to promote Tambourine, Merritt opened for Elvis Costello and recorded Austin City Limitsa performance later released as a DVD by New West Records.[15] The sold-out homecoming concert for the tourat the North Carolina Museum of Art in Raleigh, North Carolinawas recorded for a live album release; Home Is Loud was released in 2005 and re-released by the German label Blue Rose Records with bonus tracks in November 2009.[16]

After extensive touring behind Tambourine, Merritt rented an apartment in Paris, where she wrote the songs that would become 2008's Another Country album.[17] Before signing with a new label and making that record, Merritt performed Dylan's "A Hard Rain's A-Gonna Fall" at the I'm Not There tribute concert at New York City's Beacon Theater on November 7, 2007, with guitarist Joe Henry. According to the New York Times review, Merritt had "the night's purest voice."[18]

Released on Fantasy Records in 2008, Another Country featured the core of Merritt's long-time band, along with guitarist Charlie Sexton (Bob Dylan), and again with Drakoulias at the helm. Another Country continued the trend of high-profile favorable press for Merritt's releases. Emmylou Harris said, "I first heard Tift Merritt some years ago during a writers' night at a small club. She stood out like a diamond in a coal patch and everyone there knew she carried a promise of great things to come. She has more than fulfilled that promise with Another Country." Paste magazine gave the album a four-star review, calling Merritt "a force to be reckoned with in any genre she approaches."[19] The song "Broken" from Another Country was nominated for an Americana Music Award for Song of the Year.[20] The Another Country tour played the Newport Folk Festival, Bonaroo, and in 2009, the Edmonton Folk Music Festival,[21] and MerleFest. On the Another Country tour, Merritt made runs in both the US and the UK with fellow singer-songwriter Teddy Thompson.[22]

Buckingham Solo, recorded in England, is an intimate acoustic solo concert recording made during the Another Country touring, and released on the Fantasy label in April 2009.[23]

Please Break the Silence of the Middle of the Night, an iTunes EP, was released later in 2008.[24] The EP contains two alternate versions of songs from Another Country, a cover of George Harrisons "I Live For You", an outtake from the Another Country sessions, "Last To Know", and "Wayward And Weary," recorded for the film Gonzo: The Life and Work of Dr. Hunter S. Thompson.

Performance highlights of the later Another Country tour and immediately after it included opening an outdoor show in Santa Monica, California for folk singer Joan Baez,[25] opening the Pine Cone Winter Music Festival in her hometown of Raleigh for Kris Kristofferson,[26] and singing the "The Star-Spangled Banner" for then-Senator Barack Obama at his last campaign rally in Charlotte, North Carolina before winning the 2008 US Presidential election.[27]

Merritt recorded the follow-up to Another Country [28] in Durham with producer Tucker Martine. The album, See You On The Moon, was released June 1, 2010 on Fantasy Records. My Morning Jacket frontman Yim Yames (Jim James) is featured on the track "Feel of the World".[29] Again, a review in The New Yorker specified moments on the record to other singers, including Emmylou Harris, Judy Collins, and additionally U2;[3] and The Wall Street Journal included her in a weekend feature on singer-songwriters, placing her "in the tradition of Joni Mitchell, James Taylor and Leonard Cohen.[2]

The album, "Traveling Alone" was released on October 2, 2012, which was her first album released on Yep Roc Records. Musicians include Eric Heywood on pedal steel, John Convertino of Calexico on drums, Marc Ribot on guitar, Rob Burger on keyboards and a guest appearance from Andrew Bird. In late 2012, she joined Bird on the European leg of his Hands of Glory tour as the opening act, later appearing with Bird and his band members in an acoustic set.

She has also written two songs for the upcoming animated film Dorothy of Oz, starring Lea Michele and Dan Aykroyd, set for release in early 2013.

In addition to Austin City Limits, Merritt has appeared on The Tonight Show with Jay Leno, Last Call with Carson Daly, Late Show with David Letterman and Later... with Jools Holland.

Her music has appeared in the television series The L Word, Men In Trees, United States of Tara, Hart of Dixie and Switched at Birth and in the films New in Town and Little Birds.

Merritt is also a photographer; her first gallery exhibition, Other Countries, ran at The Mahler Gallery in Raleigh, North Carolina in May 2009.

She also hosts an artist-to-artist interview radio show called The Spark with Tift Merritt which is produced by KRTS in Marfa, Texas, and whose guests have included Nick Hornby, Kiki Smith, and poet C. K. Williams among others.[30] Episodes of The Spark stream on the show's website and are available as a free podcast.

In 2009, Merritt married Zeke Hutchins, her band's drummer and her long-time partner, in New York City, where they currently reside.[31]

This article uses material from the article Tift Merritt from the free encyclopedia Wikipedia and it is licensed under the GNU Free Documentation License.

Confuse My Heart Wondertoys
Update Required To play the media you will need to either update your browser to a recent version or update your Flash plugin.