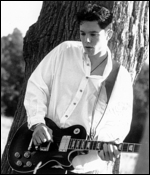 Aynsley Lister (born 14 November 1976 in Leicester) is an British blues-rock guitarist/singer and songwriter.

Lister started playing guitar at 8 and played his first concert in a bar band at the age of 13. He had learned guitar by playing along to his fathers old 45s of Freddie King, John Mayall and Eric Clapton. By the time he was 18, having already been in several bands, he formed his own, which recorded two albums Messin' With The Kid (1996) and Pay Attention! (1997). Three numbers written by Lister, on the second album, attracted the attention of Ruf Records' owner Thomas Ruf. In 1998 they signed a record deal and Lister recorded his first major album, Aynsley Lister, produced by Jim Gaines. The tracks were primarily Lister compositions, and the album featured a guest appearance by Walter Trout. The album led to him touring Europe and working with some of the top current blues players.

After his first album Lister began opening for artists such as Buddy Guy, Robert Cray, John Mayall and contemporaries such as Bryan Adams and Fun Lovin Criminals. Having become better known, he now headlines major festivals in Europe. He has twice played the Heitere Open Air in Switzerland to 12,000 people and in 2006 he played the main stage at The Bayfront Blues Festival, MN. Later that year he was invited to sit in with Delbert McClinton at The Pinedale Blues Festival in Wyoming, where Delbert kept Lister on stage for the whole second half of his show. Lister's 2000 album Everything I Need was his debut US release in 2006, in preparation for a US tour, and received critical acclaim.

Lister has also recorded with Jesse Davey from the English blues band The Hoax on Everything I Need (2000) and All Or Nothing (2002) both produced by Greg Haver (Manic Street Preachers, Catatonia). Lister's fourth studio album, and his first to only contain original material, was 2007s Upside Down which Lister produced himself.

In May 2009, Lister opened for Lynyrd Skynyrd on the UK dates of their God and Guns tour.

The Blues Caravan is an annual Ruf Records project which brings together three of the label's artists. In 2006 the artists were Lister, Ian Parker and Erja Lyytinen from Finland who created the album Pilgrimage. The concept was for each artist to write a group of songs which they would complete and record in New Orleans, Clarksdale and Memphis, so that their songwriting would reflect and be shaped by the blues heritage of those musical towns. Unfortunately Hurricane Katrina prevented them visiting New Orleans and the album was created at Delta Recording Studios, Clarksdale and Ardent Studios in Memphis, where Jim Gaines was the producer. The trio spent much of 2006 touring Europe and America, including the Gladstone Summertime Bluesfest, where they played a two and a half hour show.

Lister has released two DVDs. To complement the Live! album the show recorded by WDR Television for Rockpalast at the Crossroads Festival held in the Harmonie, Bonn on 23 March 2005 was released and contains three acoustics songs and a full band set.

Along with the Blues Caravan Pilgrimage album there is a DVD of the performance at the Underground in Cologne, Germany again recorded by WDR Television for Rockpalast on 7 December 2005, and released as Blues Caravan - The Next Generation .[2] This DVD features performances from each section of the show; each of the three members of the Blues Caravan individually and also their joint acoustic and electric sets of songs written for the Pilgrimage album. The DVD also features backstage footage and interviews.

This article uses material from the article Aynsley Lister from the free encyclopedia Wikipedia and it is licensed under the GNU Free Documentation License.