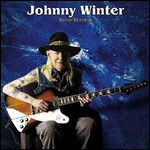 John Dawson Winter III (born February 23, 1944) known as Johnny Winter is an American blues guitarist, singer, and producer. Best known for his high-energy blues-rock albums and live performances in the late 1960s and '70s, Winter also produced three Grammy Award-winning albums for blues legend Muddy Waters. Since his time with Waters, Winter has recorded several Grammy-nominated blues albums and continues to tour extensively. In 1988, he was inducted into the Blues Foundation Hall of Fame and in 2003, he was ranked 63rd in Rolling Stone magazine's list of the "100 Greatest Guitarists of All Time".[1]

Johnny Winter, along with his musician brother Edgar Winter (born 1946), were nurtured at an early age by their parents in musical pursuits.[2] Both Johnny and his brother, who were born with albinism, began performing at an early age. When he was ten years old, Winter appeared on a local children's show, playing ukulele and singing Everly Brothers songs with his brother.

His recording career began at the age of fifteen, when his band Johnny and the Jammers released "School Day Blues" on a Houston record label.[2] During this same period, he was able to see performances by classic blues artists such as Muddy Waters, B.B. King, and Bobby Bland. In the early days Winter would sometimes sit in with Roy Head and the Traits when they performed in the Beaumont, Texas area, and in 1967, Winter recorded a single with the Traits: "Tramp" backed with "Parchman Farm" (Universal Records 30496). In 1968, he released his first album The Progressive Blues Experiment, on Austin's Sonobeat Records.[3]

Winter caught his biggest break in December 1968, when Mike Bloomfield, whom he met and jammed with in Chicago, invited him to sing and play a song during a Bloomfield and Al Kooper concert at the Fillmore East in New York. As it happened, representatives of Columbia Records (which had released the Top Ten Bloomfield/Kooper/Stills Super Session album) were at the concert. Winter played and sang B.B. King's "It's My Own Fault" to loud applause and, within a few days, was signed to reportedly what was then the largest advance in the history of the recording industry—$600,000.[2]

Winter's first Columbia album, Johnny Winter, was recorded and released in 1969. It featured the same backing musicians with whom he had recorded The Progressive Blues Experiment, bassist Tommy Shannon and drummer Uncle John Turner, plus Edgar Winter on keyboards and saxophone, and (for his "Mean Mistreater") blues legends Willie Dixon on upright bass and Big Walter Horton on harmonica. The album featured a few selections that became Winter signature songs, including his composition "Dallas" (an acoustic blues, on which Winter played a steel-bodied, resonator guitar), John Lee "Sonny Boy" Williamson's "Good Morning Little School Girl", and B.B. King's "Be Careful With A Fool".

The album's success coincided with Imperial Records picking up The Progressive Blues Experiment for wider release. The same year, the Winter trio toured and performed at several rock festivals, including Woodstock. With brother Edgar added as a full member of the group, Winter also recorded his second album, Second Winter, in Nashville in 1969. The two-record album, which only had three recorded sides (the fourth was blank), introduced a couple more staples of Winter's concerts, including Chuck Berry's "Johnny B. Goode" and Bob Dylan's "Highway 61 Revisited". Also at this time Johnny entered into an intimate, albeit short-lived affair with Janis Joplin which culminated in a concert at New York's Madison Square Garden where Johnny joined the then reigning Queen of R&R on stage to sing and perform.

Contrary to urban legend, Johnny Winter did not perform with Jimi Hendrix and Jim Morrison on the 1968 infamous Hendrix bootleg album Woke Up This Morning and found Myself Dead from New York City's The Scene club. According to Winter, "...I never even met Jim Morrison! There's a whole album of Jimi and Jim and I'm supposedly on the album but I don't think I am 'cause I never met Jim Morrison in my life! I'm sure I never, never played with Jim Morrison at all! I don't know how that [rumor] got started."[4]

Beginning in 1969, the first of numerous Johnny Winter albums was released which were cobbled together from approximately fifteen singles (about 30 "sides") he recorded before signing with Columbia in 1969.[2] Many were produced by Roy Ames, owner of Home Cooking Records/Clarity Music Publishing, who had briefly managed Winter. According to an article from the Houston Press,[5] Winter left town for the express purpose of getting away from him. Ames died on August 14, 2003 of natural causes at age 66. As Ames left no obvious heirs, the ownership rights of the Ames master recordings remains unclear. As Winter stated in an interview when the subject of Roy Ames came up, "This guy has screwed so many people it makes me mad to even talk about him."[5]

In 1970, when his brother Edgar released a solo album Entrance and formed Edgar Winter's White Trash, an R&B/jazz-rock group, the original trio disbanded. Johnny Winter then formed a new band with the remnants of The McCoys—guitarist Rick Derringer, bassist Randy Jo Hobbs, and drummer Randy Z (who was Derringer's brother, their family name being Zehringer). Originally to be called "Johnny Winter and The McCoys", the name was shortened to "Johnny Winter And", which was also the name of their first album.[2] The album included Derringer's "Rock and Roll, Hoochie Koo" and signaled a more rock-oriented direction for Winter. When Johnny Winter And began to tour, Randy Z was replaced with drummer Bobby Caldwell. Their mixture of the new rock songs with Winter's blues songs was captured on the live album Live Johnny Winter And. It included a new performance "It's My Own Fault", the song which brought Winter to the attention of Columbia Records.

Winter's momentum was throttled when he sank into heroin addiction during the Johnny Winter And days. After he sought treatment for and recovered from the addiction, Winter was courageously put in front of the music press by manager Steve Paul to discuss the addiction candidly.[2] By 1973, he returned to the music scene with the release of Still Alive and Well, a basic blend between blues and hard rock, whose title track was written by Rick Derringer. His comeback concert at Long Island, N.Y.'s Nassau Colliseum featured the "And" line-up minus Rick Derringer and Bobby Caldwell. Also performing on stage was Johnny's wife Susie. The follow-up album, John Dawson Winter III featured "Sweet Papa John," a highly-dubbed slow blues number written by Johnny, which also appeared in an extended version on the later issued "Captured Live." Saints & Sinners, continued the same direction; this was followed by another concert set, the aforementioned Captured Live!, which featured an extended performance of "Highway 61 Revisited". In 1975 Johnny returned to Bogalusa, Louisiana, to produce an album for Thunderhead, a Southern rock band which included Pat Rush and Bobby "T" Torello, who would later play with Winter.

In live performances, Winter often told the story about how, as a child, he dreamed of playing with the blues guitarist Muddy Waters. In 1977, after Waters' long-time label Chess Records went out of business, he got his chance.[2] Winter brought Waters into the studio to record Hard Again for Blue Sky Records, a label set up by Winter's manager and distributed by Columbia. In addition to producing the album, Winter played guitar with Waters veteran James Cotton on harmonica. Winter produced two more studio albums for Waters, I'm Ready (with Big Walter Horton on harmonica) and King Bee and a best-selling live album Muddy "Mississippi" Waters Live. The partnership produced three Grammy Awards for Waters and an additional Grammy for Winter's own Nothin' But the Blues, with backing by members of Waters' band. Waters told Deep Blues author Robert Palmer that Winter had done remarkable work in reproducing the sound and atmosphere of Waters's vintage Chess Records recordings of the 1950s. The albums gave Waters the highest profile and greatest financial successes of his life.

After his time with Blue Sky Records, Winter began recording for several labels, including Alligator, Point Blank, and Virgin, where he focused on blues-oriented material.[2] In 2004, he received a Grammy Award nomination for his Im a Bluesman album. Beginning in 2007, a series of live Winter albums titled the Live Bootleg Series and a live DVD have all entered the Top 10 Billboard Blues chart. In 2009, The Woodstock Experience album was released, which includes eight songs that Winter performed at the 1969 festival. In 2011, Johnny Winter released a new studio album titled Roots on Megaforce Records. It includes Winter's interpretation of eleven early blues and rock 'n' roll classics and features several guest artists (Vince Gill, Sonny Landreth, Susan Tedeschi, Edgar Winter, Warren Haynes, and Derek Trucks).

Winter has continued to perform live, including at festivals throughout North America and Europe. He has headlined such prestigious events as the New Orleans Jazz & Heritage Festival, Chicago Blues Festival, the 2009 Sweden Rock Festival, The Warren Haynes Christmas Jam, and Rockpalast. He also performed with the Allman Brothers at the Beacon Theater in New York City on the 40th anniversary of their debut. In 2007 and 2010, Winter performed at Eric Claptons Crossroads Guitar Festivals. Two guitar instructional DVDs have been produced by Cherry Lane Music and the Hal Leonard Corporation. The Gibson Guitar Company released the signature Johnny Winter Firebird guitar in a ceremony in Nashville with Slash presenting.

Winter produced three Grammy Award-winning albums by Muddy Waters, Hard Again (1977), I'm Ready (1978), and Muddy "Mississippi" Waters Live (1979). Several Winter albums were also nominated for Grammy Awards.[6] In 1980, Winter was on the cover of the first issue of Guitar World and in 1988, he was inducted into the Blues Foundation Hall of Fame. There was a character in the video game Heavy Rain named after Winter.

In 1996, musicians Johnny and Edgar Winter filed suit against DC Comics and the creators of the Jonah Hex: Riders of the Worm and Such limited series, claiming, amongst other things, defamation: two characters named the Autumn Brothers in the series strongly resemble the Winters.[7] In 2003, the Supreme Court of California sided with DC.[8]

Throughout his career, Johnny Winter has been dogged by bootleg recordings and unauthorized re-releases of singles from his early pre-Columbia Records days. According to one biographer, only about fifteen percent of Winter's commercially-available recordings are legitimate, leaving 85 percent that he had no control over.[2] Some of the releases were doctored with later overdubs by other musicians. Royalties were not Winter's primary concern, "I just don't want that bullshit out ... It's just bad music".[2] The following lists Johnny Winter's official albums.

As producer and guitarist

This article uses material from the article Johnny Winter from the free encyclopedia Wikipedia and it is licensed under the GNU Free Documentation License.

Boum boum Flavie Léa
Update Required To play the media you will need to either update your browser to a recent version or update your Flash plugin.