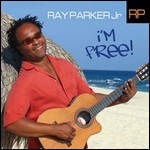 Ray Erskine Parker, Jr. (born May 1, 1954) is an American guitarist, songwriter, producer and recording artist. Parker is known for writing and performing the theme song to the motion picture Ghostbusters, for his solo hits, and performing with his band Raydio as well as the late Barry White.

Parker is a Detroit native and a 1972 Northwestern High School graduate. He was raised in the Dexter-Davison neighborhood on the city's West Side.

Parker gained his reputation during the early 1970s as a member of the house band at the legendary 20 Grand nightclub. This Detroit hot-spot often featured Tamla/Motown acts, one of which the (Detroit) Spinners, was so impressed with the young guitarist's skills that they added him to their touring group. Parker was also employed as a teenaged studio musician for the emergent Holland-Dozier-Holland's Invictus/Hot Wax stable and his choppy style was particularly prevalent on 'Want Ads', a number one single for Honey Cone.

In the mid-1970s he was a sideman in Barry White's The Love Unlimited Orchestra, before creating Raydio, an R&B group, in 1977, with Vincent Bohnam, Jerry Knight, and Arnell Carmichael. Parker appeared briefly in the 1974 film Uptown Saturday Night as a guitar player. Parker also wrote songs and did session work for The Carpenters, Rufus and Chaka Khan, Aretha Franklin, Stevie Wonder (an association which prompted a permanent move to Los Angeles), Deniece Williams, Jean-Luc Ponty, Leon Haywood, Temptations, The Spinners, Boz Scaggs, David Foster, Rhythm Heritage, Gladys Knight and the Pips, The Honey Cone, Herbie Hancock and Diana Ross.

Raydio scored their first big hit, "Jack and Jill", from their self-titled album in 1978 with Arista Records. The song reached #8 on the Billboard Hot 100 chart, earning a million-selling Gold single in the process.

Their successful follow-up hit, "You Can't Change That" was released in 1979, from the Rock On album. The song was another Top 10 hit, peaking at #9 on the Billboard chart during the summer and also selling a million copies.

In 1980, the group became known as Ray Parker Jr. and Raydio, and the group released two more albums: Two Places at the Same Time in 1980 and A Woman Needs Love in 1981.

In 1981, he produced on the then emerging hard funk sound on the single "Sweat (till you get wet)" by Brick.

Parker was one of the first black artists to venture into the then-fledgling world of music videos. In 1978, Hollywood producer, Thom Eubank produced several music videos of songs from his first album entitled, Raydio on Arista Records. The hit single, "Jack & Jill" was the first released to air on Wolfman Jack's Saturday night television show, The Midnight Special. The music videos were also transferred to film and projected in movie theaters all over Europe. He also made two different videos for his hit "The Other Woman". The first was Halloween-themed and centered around a haunted castle with dancing corpses and vampires. The second was more performance-oriented, with Parker performing the song against an outer space background with backup singers. Parker made the performance-oriented video because MTV refused to play his Halloween-themed video due to its depiction of an interracial relationship.

Parker also wrote and produced hits for New Edition ("Mr. Telephone Man"), Randy Hall, Cheryl Lynn ("Shake It Up Tonight"), Deniece Williams ("I Found Love") and Diana Ross. He also performed guitar on several songs on La Toya Jackson's 1980 debut album. In 1989, he also wrote "Ghostbusters", a rap performed by Run-D.M.C., for the movie Ghostbusters 2. 1989 also saw Parker Jr. work with actor Jack Wagner (General Hospital) on an album for MCA Records that was eventually shelved and never released. A single from the Jack Wagner sessions, "Wish You Were Mine", featuring an intro rap by Parker, Jr. was released on an MCA 1990 Pop/Rock Promotional Sampler CD.

In 2006, Parker returned and released a new CD titled: I'm Free. Of his first single called Mismaloya Beach: "I think it was the longest running instrumental on Smooth Jazz radio", says Parker. I'm Free showcases a new found beginning for Parker and embraces a variety of musical styles including Urban, Pop, Rock, Jazz, Blues, and Reggae.

"Ghostbusters" was the title track of the Gold-selling soundtrack of the hit movie Ghostbusters, starring Bill Murray, Dan Aykroyd, Harold Ramis and Ernie Hudson. The single was at #1 for three weeks on Billboard's Hot 100 chart, and at #1 for two weeks on its Black Singles chart. The song was also nominated for an Academy Award for Best Original Song in 1984 but lost to Stevie Wonder's "I Just Called to Say I Love You" from The Woman in Red.

Parker was accused of plagiarizing the melody from Huey Lewis and the News song "I Want a New Drug", released only six months after Lewis' hit reached #6 in the Billboard Hot 100. This ended with Lewis suing Parker, and the pair settled out of court in 1985. Nonetheless, Parker's success continued as the song secured him a 1984 Grammy Award for Best Pop Instrumental Performance.

They returned to court once again in 2001, as Parker sued Lewis for breaching a confidentiality agreement forming part of their original out of court settlement which prohibited either side from speaking about it publicly. Lewis had implied in a VH1 Behind The Music special that Parker had paid a financial settlement as part of the original agreement.

Both "Ghostbusters" and "I Want a New Drug" have been accused of lifting their bass lines from the 1979 M song "Pop Muzik."

In early 2009, Parker appeared in a television advertisement for 118 118, a British directory enquiries provider. This featured Parker singing a 118-specific version of the Ghostbusters theme song.[1] On 15 April 2009, Parker's 118 theme song was available as a downloadable ringtone from the 118 118 mobile website.

This article uses material from the article Ray Parker, Jr. from the free encyclopedia Wikipedia and it is licensed under the GNU Free Documentation License.