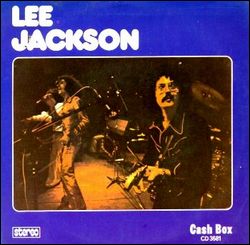 born on 8/1/1943 in Newcastle upon Tyne, England, United Kingdom

Lee Jackson (born Keith Lee Jackson, 8 January 1943, Newcastle upon Tyne) is a British bass player and singer, best known for his work in The Nice.

Jackson rose to prominence in the 1960s in the progressive rock group, The Nice, with keyboardist Keith Emerson and drummer Brian Davison. He subsequently formed Jackson Heights and then Refugee, the latter with Davison and keyboardist Patrick Moraz.

Jackson has a hoarse singing voice (which has frequently drawn criticism, notably from Keith Emerson[1]) and an almost percussive bass playing style. A left-handed player, usually wearing distinctive "aviator" style tinted spectacles, he distinguished himself further by favouring the Vox V248 bass guitar with its unusual teardrop-shaped body, the same bass made famous by Bill Wyman of the Rolling Stones. For some pieces, Jackson would play the instrument using a bow, notably on "Hang On to a Dream", "My Back Pages" and in the introduction to "Intermezzo from the Karelia Suite".

Jackson subsequently retired from the music industry for a period. Returning to the UK in the early 1990s, after living in Los Angeles, California, Jackson played in a blues and boogie, ten piece band called the Ginger Pig Band based in Northampton. Jackson still plays and sings with this band today. He also had a smaller band called The Barking Spyders for about a year during this time. The Nice reunited for a period in the 2000s.

This article uses material from the article Lee Jackson (bassist) from the free encyclopedia Wikipedia and it is licensed under the GNU Free Documentation License.

Looking at You Pull n Way
Update Required To play the media you will need to either update your browser to a recent version or update your Flash plugin.