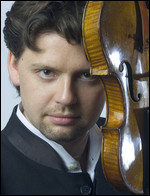 Julian Rachlin (born 8 December 1974) is a Lithuanian-born violinist and violist.

Born in Vilnius, he emigrated in 1978 with his musician parents to Austria. In 1983, he entered the Konservatorium Wien and studied violin in the Soviet tradition with Boris Kuschnir, while also receiving private lessons from Pinchas Zukerman. His career as a child prodigy began with his first public concert in 1984.

In 1988, he took the title of Eurovision Young Musician of the Year, which led to his being invited to appear at the Berlin Festival with conductor Lorin Maazel and to his becoming the youngest soloist to ever play with the Vienna Philharmonic, under the direction of Riccardo Muti.

In the development of his career, Rachlin has enjoyed collaborations with some of the most illustrious maestros in Europe and the United States, including Vladimir Ashkenazy, Bernard Haitink, James Levine, Zubin Mehta, and André Previn.

In 2000, he joined Rostropovich and Yuri Bashmet, among others, in the premiere of Krzysztof Penderecki's Sextet. The same year, Rachlin also founded his own music festival in Dubrovnik, "Julian Rachlin and Friends". Since 2000, he has also played the concerto and chamber repertoire for the viola.

In 2005, Rachlin made his Carnegie Hall debut when he performed with the New York Philharmonic under Maazel.[1]

Rachlin's recordings of the violin concertos of Brahms, Sibelius, and Tchaikovsky, as well as of Shostakovich's Sonata for Viola and Piano, op. 147, have been lauded by music critics.

He performed with The Malaysian Philharmonic Orchestra (MPO)on April, 2009.[2]

2009 he performed at the [Eilat] Festival in Israel, and shared stage with Aleksey Igudesman, Pavel Vernikov, Aisha Syed, Boris Kushnir, and Maxim Vengerov[3]

In 2011, he declined the invitation to play in the Miyazaki Prefecture due to radiation concerns in Japan from Fukushima I nuclear accidents. However, Miyazaki Prefecture as well as much of Western part of Japan were not affected by the recent disasters or radiation. Proceeds from the concert went to the 2011 Thoku earthquake and tsunami Victim.[4]

In 2013, he played at Mughal-era Shalimar Gardens in Srinagar, Kashmir in a concert conducted by Zubin Mehta called Ehsaas-e-Kashmir, playing the third movement of Tchaikovsky's violin concerto.

In 2000, he was rewarded with the prestigious International Prize of the Accademia Musicale Chigiana of Siena.

This article uses material from the article Julian Rachlin from the free encyclopedia Wikipedia and it is licensed under the GNU Free Documentation License.

Do you hear what I hear? Whitney Houston
Update Required To play the media you will need to either update your browser to a recent version or update your Flash plugin.