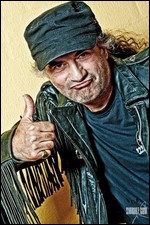 Marc Storace (Sto-rah-che)(born October 7, 1951) is a Maltese born rock vocalist. His career in music started in the 1960s. He is most noted for his position as frontman, lead singer and songwriter of Swiss hard rock band Krokus from 1980. Before joining Krokus he sang with the Swiss Prog Rockers TEA. He has since also undertaken a solo project, duets, an acoustical project, and many Guest slots. He also had some close encounters with the classical meets rock world and has worked with a few other rock acts as writer and a singer.

Marc has a high pitched raunchy voice, making him a very distinct vocalist, and has been compared to AC/DC's former lead singer Bon Scott or Led Zeppelin's Robert Plant in terms of vocal style, sharing many of their vocal qualities. Since he began singing professionally in the 1970s, his style and voice have remained largely the same, with a noticeable increase of character, through maturity and years of live and studio experience.

Marc has recently played a major role in the Swiss-German films Anuk and Handyman, in which he acted, as well as contributed his writing and singing to songs for both the film's soundtracks.

Born as Mark Anthony Storace Crockford, one of six children to Anthony Storace and Edna Crockford on the Mediterranean island of Malta, Marc taught himself to sing at a fairly young age. His life in bands began at the age of fourteen (1965) when he made his first live performances with two local bands: Stonehenge Union (who covered the likes of the Beatles, the Rolling Stones , the Troggs and the Kinks) and: the Boys (who covered some of the same songs, as well as chart material and more vocally challenging songs e.g. Aquarius from the Musical "HAIR"). In the late 1960s, the Boys (still with Marc as lead vocalist) changed their name to Cinnamon Hades, and, whilst retaining the Beatles Abbey Road Medley changed to cover hard rock acts such as Led Zeppelin, Deep Purple, Jimi Hendrix Black Sabbath or the Who.

Wanting to make a career out of singing, Marc moved to London, England, in 1970. In 1971,Marc stayed for a short while in Southfields, London with Stonehenge Union's Drummer, Joe Burlo who had also left Malta for London in 1970.

Further on in his career, after joining Krokus, many people who heard Marc sing thought that he sounded like Bon Scott of AC/DC. He did not take this as a compliment at the time,[1] saying that, with all respect to Bon, he had his own singing identity. In fact, Marc was later indirectly approached (by the Boss of "Light & Sound" - Birmingham, a production company used by both AC/DC and KROKUS at the time) to audition for the frontman job with AC/DC after Bon's tragic death, but Krokus was enjoying a very fast increase in success whilst at that point in time AC/DC was not that huge...not yet...and Marc declined the offer.

At the end of 1971, Marc joined Swiss progressive hard rock band TEA. With them, he toured Europe with big acts such as Queen and Nazareth, and released three studio albums: TEA, The Ship and Tax Exiles. All were produced by Dieter Dierks, at that time the man behind the Scorpions. For a while, TEA became Switzerland's international rock Flagship, performing as far as Hamburg, London, Wales, Glasgow, Naples and even Malta.

In 1976, TEA performed their last tour, taking Krokus on-the-road as supporting act. Those backstage encounters with the Krokus bandmembers sowed the seeds to what followed later on. Meanwhile he returned to London and formed the band Eazy Money. Their song "Telephone Man" was included on a Metal-Music-Compilation album called Metal for Muthas Vol.2. In 1979, he received a call from Krokus founder Chris Von Rohr, who told him they were looking for a new singer and invited Marc for a "weekend jam" in Switzerland. One exciting long weekend session later, Marc, Chris, Tommy, Fern and Freddie were convinced that a collaboration was definitely worth a good try!

In 1980, Marc recorded and released his first album with Krokus, Metal Rendez-vous. It became Krokus's first big International hit album, the first to make the Gold & Platinum Status(today 4 x Platinum). With Marc on board, Krokus's success increased dramatically, and from then until 1988 they toured extensively, mostly in the United States, Canada and Europe, with tours lasting up to nine months at a time, as well as releasing a further six studio albums (Hardware, One Vice at a Time, Headhunter, The Blitz, Change of Address and Heart Attack) and one live album (Alive and Screamin'). This intense long period of constant writing, recording and touring without a break, pushed the band close to a burn-out, and they went their ways in the summer of 1988.

In 1994, Marc encouraged fellow ex-Krokus member Fernando Von Arb to re-form the band, and so a Reunion Tour commenced with a reformed "One Vice At A Time " formation, minus Chris, who was busy producing Swiss Rockers Gotthard at the time. Their Swiss fans showed their loyal support enthusiastically, so in 1995, Krokus released another studio album, To Rock or Not to Be. Musically, this album took the band back to 1988. It went Gold and once again Krokus were touring with Marc as their frontman. The year 2002 saw Krokus, with an altered line-up to that of the 1988 hiatus and 1994 return (basically with the DC World AC/DC Tribute line-up plus Fernando & Marc) releasing "Rock The Block". This was followed by one of their most extensive Tours of Europe so far, playing Swedenrock Festival and, on the personal invitation of the late great Claude Nobs (the man in Deep Purple`s "Smoke On The Water":) the prestigious "Montreux Jazz Festival" too! A DVD of that Montreux Gig was included with their following release, a Double-Album "Fire & Gasoline" containing magnificent "LIVE" Recordings from many Gigs off their "Rock The Block" Tour.

A long awaited comeback in the USA first happened in September 2005...with Mandy Meyer on board, replacing Fernando Von Arb (the latter having undergone surgery to his hand) on lead guitar! It was a very intense US Club-Tour in which the band played 22 Gigs in 30 days! Quite an inspiring achievement for the new Line-Up before diving into their next song-writing phase for the follow-up album "Hellraiser"! The Hellraiser formation became the most active and widely toured in Europe so far.

2007 saw the core of the old Metal-Rendezvous album formation (minus lead guitarist Thomas Kiefer, who had died) back together for an incredibly well received Swiss-Best-Hits TV Show. This rekindled the band`s 80`s spirit and was followed by a huge comeback of the originals. Since then they produced 2 more successful studio-albums: "Hoodoo" and, after another line-up change,"Dirty Dynamite", for which Marc`s vocals were recorded at the legendary Abbey Road studios in London. This was followed by the band`s 3rd. "Live" album to date, called "Longstick Goes Boom", recorded in the famous Swiss live-venue "The Kofmehl", in the band`s hometown of Solothurn, Switzerland.

In 2015 Krokus literally "embarked" on a promo-tour for their new "Live" Album playing the Monsters Of Rock Cruise in the Caribbean and then continued with some long anticipated USA Dates. They ended their Longstick Goes Boom Tour with 2 shows at the legendary "Whiskey A Go Go" on the famous Sunset Strip in Los Angeles.

In 2016, Marc was considered as a candidate to replace Brian Johnson as lead vocalist of AC/DC. Krokus were already working on a new album at the time.

BIG ROCKS, a collection of covers by artists who had influenced the individual band members since their teens, was released by Krokus in January 2017. It went straight to No.1 in the Swiss Charts.

Marc has been Krokus' vocalist/frontman since October 1979, and has sung on all but 5 of the band`s Studio-Album-Collection.

In spring 1989, Marc returned to Switzerland and wrote songs for his first solo project, The Blue Album. It contains a rare collection of soul influenced rock songs, and was released in 1991 by EurostarGermany. It was re-released in 1998 by BMG Records, Switzerland under the name Vergeat-Storace. Vic Vergeat, of Toad and Gotthard fame, was guitar-player, co-songwriter and co-producer for the project.

Shortly after AC/DC vocalist Bon Scott's death in 1980, Marc was indirectly asked to audition for the vacancy in the band, but things were going extremely well for Krokus at the time.[1][2] He also claimed that, besides his feelings of loyalty to his mates, he felt his band was going to continue to get bigger.

In 1993, Marc joined as guest with the Swiss rock band China. A "live" album of the band`s one and only tour with Marc in 1993 was eventually released on the CD called "Alive!" in 2000. (This concert was a "live" Swiss-Radio broadcast of their gig in Sempach released by Phonag Records).[3]

With China's guitarists Freddie Lawrence and Claudio Matteo, Marc formed Acoustical Mountain that same year. This un-plugged trio, performing without drums, played rock 'n' roll classics around Switzerland but never released any albums , making them a "live-only" project. They split and then reformed in 1995, this time with China's bassist Brian Kofmehl replacing Freddie, who moved on to join Swiss melodic-rockers Gotthard. In the meantime Brian was replaced by Charly Preissel on 2nd guitar. Marc and Claudio still perform at "Private-Events" as Acoustical Mountain, sometimes with Charly Preissel.

In 1994, during a break in his Krokus Reunion duties, Marc joined Manfred Ehlert's Amen to release an album in the same year.Glenn Hughes sang some tracks. Marc's second album with Amen was called Aguilar, released in 1996. This time Marc sang all bar one track which again featured Glenn Hughes.

In 2003, during another break from Krokus commitments, Marc wrote and recorded with Los Angeles based metal rockers Warrior. This adventure resulted in the one-off album The Wars of Gods and Men. He greatly enjoyed his Los Angeles stay which enabled him to combine some filming for a planned Krokus movie, and briefly catch up with old Stateside friends. This was his first collaboration with an American Band. Working with Guitarist and founder member Joe Floyd was a creative. Marc explored and expressed some undiscovered and sometimes shadier dimensions from within his vocal domain. That unique Warrior album was released in the USA and Switzerland in 2004.

November 2004 saw German producer Michael Voss invite Marc to sing on the new album of the band Biss, titled Face-off, which was released in 2005. It was a melodic rock album and Marc said the songs were "refreshing".[4] *Face-Off* was released in May 2005.

The following year, 2006, saw yet another release by BISS featuring Marc on the album X-Tension, and again he contributed to the songwriting.

In 2006, Marc took part in the Swiss-German Film Anuk, playing the role of Geisterzunge, a tribal medicine-man / Shaman. Produced by Luke Gasser (who also plays the lead role), the film tells the story of a Bronze Age tribe trying to save itself from eradication by ruthless maurauding horsemen. The story takes place on the panoramic Swiss Alps. Marc co-wrote the soundtrack with Gasser and sings on the song "On My Own" together with Gasser and Doro Pesch. His Shaman-Chanting can be heard throughout the movie.[6]

This article uses material from the article Marc Storace from the free encyclopedia Wikipedia and it is licensed under the GNU Free Documentation License.

Follow The Wind Bastian Baker
Update Required To play the media you will need to either update your browser to a recent version or update your Flash plugin.