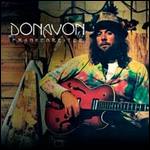 Donavon Frankenreiter (born December 10, 1972 in Downey, California) is an American musician and surfer. His debut self-titled album was released in 2004 on Brushfire Records through Universal Music.

An acoustic EP of cover songs called Recycled Recipes landed in 2007, with the polished full-length Pass It Around following in 2008. For the Pass It Around Tour, Donavon teamed up with surf artist and friend, Jay Alders to design a Limited Edition Tour Poster.[2]

In 2010 Donavon parted ways with Lost Highway Records, and formed his own label, Liquid Tambourine Records. He subsequently recorded and released his fourth studio album of original material entitled Glow, which was produced by Mark Weinberg.[3]

With Jack Johnson and G.Love

Frankenreiter is a playable character in the video game Kelly Slater's Pro Surfer.

This article uses material from the article Donavon Frankenreiter from the free encyclopedia Wikipedia and it is licensed under the GNU Free Documentation License.

Too Many Hours Jacob Dinesen
Update Required To play the media you will need to either update your browser to a recent version or update your Flash plugin.