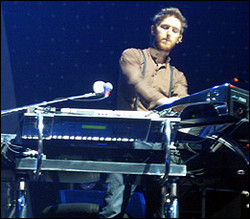 Jesse Royal Carmichael (born April 2, 1979) is an American musician and songwriter. He plays the keyboards and rhythm guitar for the pop rock band Maroon 5. Carmichael also has a solo project called 1863.

Carmichael was born in Boulder, Colorado, United States.[1] His father, Bob Carmichael, is a photographer, who also takes pictures during Maroon 5's tours. Jesse has a younger sister, Annie. He first started playing the guitar in junior high, rather than the keyboards (for which he is known in the band Maroon 5). Some time later, Carmichael, along with Adam Levine, Mickey Madden and Ryan Dusick, started a band called Kara's Flowers and signed a recording contract with Reprise Records. In 1997, they released their debut (and only) album, The Fourth World. The album found little success and, after the demise of the group, Carmichael and Levine attended Five Towns College. While in college, Carmichael began to play the keyboards.[1] However, two years later, Levine and Carmichael dropped out and headed back to California.[1]

All of the Kara's Flowers members eventually met up and formed Maroon 5, with the addition of guitarist, James Valentine.

On March 9, 2012, Carmichael was announced to take a break from playing in Maroon 5, for an undetermined amount of time to focus more on his studies of "music and the healing arts" (spiritual healing).[2] However, two years later (in 2014), he returned to the band in time to record for their fifth studio album, entitled V.

As a featured artist

This article uses material from the article Jesse Carmichael from the free encyclopedia Wikipedia and it is licensed under the GNU Free Documentation License.

Why Kisha
Update Required To play the media you will need to either update your browser to a recent version or update your Flash plugin.