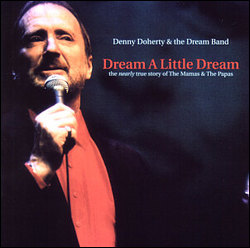 Dennis "Denny" Gerrard Stephen Doherty (November 29, 1940 – January 19, 2007) was a Canadian singer, songwriter, musician and actor. He was most widely known as a founding member of the 1960s musical group The Mamas & the Papas.

Denny Doherty was born in Halifax, Nova Scotia. Doherty started his musical career there in 1956 with a band called the Hepsters, featuring his three friends Richard Sheehan, Eddie Thibodeau and Mike O'Connell. The group played at a number of clubs in the Halifax area and according to Sheehan they drew crowds wherever they went due to Denny's incredible voice. Two years later, they disbanded and then in 1960, still in their hometown, Doherty at the age of 19, along with Pat LaCroix and Richard Byrne, began a folk group called The Colonials. Columbia Records signed the group several months later, upon which time they changed their name to The Halifax III. The band recorded two LPs and had a minor hit, "The Man Who Wouldn't Sing Along With Mitch", but broke up in 1963. Coincidentally, they separated at a hotel called "The Colonial" in Los Angeles.

In 1963, Doherty established a friendship with Cass Elliot when she was with a band called "The Big 3". While on tour with "The Halifax III", Doherty met John Phillips and his new wife, model Michelle Gilliam.

A few months later, The Halifax III dissolved, and Doherty and their accompanist, Zal Yanovsky, were left broke in Hollywood. Elliot heard of their troubles and convinced her manager to hire them. Thus, Doherty and Yanovsky joined the Big 3 (increasing the number of band members to four). Soon after adding even more band members, they changed their name to the "Mugwumps"who soon broke up also due to insolvency after which Yanovsky went on to form The Lovin' Spoonful with John Sebastian.

About this time, John Phillips' new band, "The New Journeymen", needed a replacement for tenor Marshall Brickman. Brickman had left the folk trio to pursue a career in television writing, and the group needed a quick replacement for their remaining tour dates. Doherty, then unemployed, filled the opening. After the New Journeymen called it quits as a band in early 1965, Elliot was invited into the formation of a new band, which became "The Magic Cyrcle". Six months later in September 1965, the group signed a recording contract with Dunhill Records. Changing their name to The Mamas & the Papas, the band soon began to record their debut album, If You Can Believe Your Eyes and Ears. The Mamas & the Papas song "Creeque Alley" briefly outlines this history.

In late 1965, Denny Doherty and Michelle Phillips started an affair. They were able to keep it secret during the early days of the band's new-found success.

When the affair was discovered, John and Michelle Phillips moved to their own residence (they had been sharing a house with Doherty), and the band continued recording together. Eventually the group signed a statement in June 1966 with their record label's full support, firing Michelle from the band. She was quickly replaced by Jill Gibson, girlfriend of the band's producer Lou Adler. Gibson's stint as a "Mama" lasted two and a half months.

Due to fan demand, Michelle Phillips was allowed to rejoin the band in August 1966, while Gibson was given a lump sum for her efforts. The band completed their second album (titled simply, The Mamas and the Papas) by re-recording, replacing, or overlaying new vocal parts by Michelle Phillips over Jill Gibson's studio vocals.

After a continuing string of hit singles, many television appearances (including a notable and critically well-received TV special featuring the music of Rodgers and Hart), a successful third studio album (The Mamas and the Papas Deliver in March 1967), and the groundbreaking sociological impact of the Monterey International Pop Festival (which had been organized by John Phillips and Lou Adler) in June 1967, an ill-fated trip to England in October 1967 fragmented the already damaged group dynamic. Cass Elliot quit, after a stinging insult from John Phillips, (although she returned to complete her parts for the group's overdue fourth album, The Papas and the Mamas, which was finally released in May 1968). By then, Michelle Phillips had given birth to Chynna Phillips (in February 1968) and a formal statement had been released, announcing the group's demise.

Elliot and Doherty remained friends after the band's break-up, while Elliot had a hit solo show. She eventually asked Doherty to marry her, but he declined. He released a few solo LPs and singles during this period, two of note being 1971's Watcha Gonna Do? and 1974's Waiting for a Song, the latter of which went unreleased in the US. Featuring both Michelle and Cass on background vocals, the recordings would be Elliot's last, as she died after a sold-out run in London a few months later after the record was finished. Doherty was stunned and saddened to hear about her death in 1974 at age 32. He attended her funeral several days later in early August along with the Phillipses.

In 1982, Doherty joined a reconstitution of The Mamas & the Papas consisting of John Phillips, his daughter Mackenzie Phillips, and Elaine "Spanky" McFarlane, which toured and performed old standards and new tunes written by John himself.

He produced an off-Broadway show called Dream a Little Dream, which was a narrative of his perspective of the story of The Mamas & the Papas. It was well received and garnered favourable reviews. The show was in part a response to John's PBS documentary Straight Shooter: The True Story of John Phillips and The Mamas and the Papas. It featured music from the group and focused on his relationship with Mama Cass. It was, he said, to "set the record straight".

In 1993, he played the part of Harbour Master, as well as the voice-overs of the characters, in Theodore Tugboat,[1][2][3] a CBC Television children's show chronicling the "lives" of vessels in a busy harbour loosely based upon Halifax Harbour.

In 1999, he also played "Charley McGinnis" in 22 episodes of the CBC Television series Pit Pony.[4]

One of his last appearances was in the Canadian TV series Trailer Park Boys, Season 7 Episode 10 (season finale) as FBI Special Agent Ryan Chalkneck. Filming was completed just shortly before his death in early 2007. The aired episode ended with the message,

This episode is dedicated to the memory of Denny Doherty.

Denny Doherty died on January 19, 2007, at his home in Mississauga, Ontario, from kidney failure following surgery for an abdominal aortic aneurysm.[5]

A documentary on his life was made shortly after called Here I Am, the title song written with blues guitarist James Anthony. He is interred at the Gate of Heaven Cemetery in Lower Sackville, Nova Scotia.

Doherty had three children: a daughter, Jessica Woods, from a brief first marriage, and a daughter, Emberly, and son, John, by his 20-year marriage to his second wife, Jeannette, who died in 1998.

His son, John Doherty, was temporarily in the Canadian ska/punk band, illScarlett.

"-" indicates did not chart in that territory

This article uses material from the article Denny Doherty from the free encyclopedia Wikipedia and it is licensed under the GNU Free Documentation License.