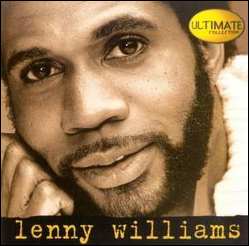 Leonard Charles "Lenny" Williams (born February 16, 1945, Little Rock, Arkansas)[1] is an American singer known for his work in the R&B and soul music genres. During the 1970s, he was the lead vocalist for Tower of Power. As a soloist, he made several hit recordings, including 1977's "Choosing You" and 1978's "Cause I Love You".

Williams was born in Little Rock, Arkansas and later moved to Oakland, California, at a young age. Learning to play the trumpet in elementary school fueled his interest in music; his skills as a vocalist were first nurtured by singing in gospel choirs and groups around the Bay Area. He worked with several notable artists, such as Sly Stone, Andraé Crouch, Billy Preston and members of the Hawkins family, Edwin, Walter and Tramaine.

After winning several local talent contests, Williams signed his first recording contract with Fantasy Records. He cut two singles for the label, including "Lisas Gone" and "Feelin Blue", written by John Fogerty of Creedence Clearwater Revival. In 1972, Williams joined the emerging funk band Tower of Power. A string of hits followed, including "So Very Hard To Go", "Don't Change Horses (In The Middle Of The Stream)" and "Luvin You", written by Williams and Johnny "Guitar" Watson. During his two years with the group, Williams participated in three albums: Back To Oakland, Urban Renewal and the gold LP Tower Of Power. Williams and Tower of Power toured throughout the United States, Europe and Asia.

While still with Tower of Power, he recorded his first solo album Pray For The Lion for Warner Bros. Records in 1974. At the end of 1975, Williams left the band and returned to his solo projects. Initially signing with Motown Records in 1975, he later moved to ABC Records in 1977 (which was then purchased by MCA Records in 1979). With producer Frank Wilson at the helm and songwriters such as Judy Wieder, Clay Drayton, Terry McFadden, and John Footman, over the next four years, he scored ten chart hits, including "Shoo Doo FuFu Ooh", "Choosing You", "You Got Me Running", "Love Hurt Me Love Healed Me", "Here's To The Lady," and "Midnight Girl". Williams recorded four more albums from 1977 to 1980: Choosing You, his first gold LP; Spark Of Love (contains Wieder's "You Got Me Running" and Williams' "Cause I Love You"); Love Current (contains Wieder and Footman's "Riding The High Wire"); "Taking Chances" (contains Williams, Wieder and Jackson Jr.'s "Freefall Into Love"); and Lets Do It Today.

After leaving MCA, Williams recorded for the independent record labels, Rockshire and Knobhill. In 1986, he was invited to sing vocals on "Don't Make Me Wait For Love" a track from Duotones, a multi-platinum recording by Kenny G. The song became a Top 20 Billboard Hot 100 and R&B hit the following year.

His 1978 hit song "Cause I Love You" was sampled by Havoc of Mobb Deep for the track "Nothing Like Home", and by Kanye West for the songs "Overnight Celebrity" by Twista and "I Got A Love" by Jin. The track was sampled a fourth time in 2007 by Scarface for his single "Girl You Know" featuring Trey Songz & Young Jeezy sampled "Let's Talk It Over" for his single "I Do" featuring Jay-Z and Andre 3000. His song "Half Past Love" was also sampled by The Coup for their 2006 single "My Favorite Mutiny" featuring Black Thought of The Roots and Talib Kweli of Black Star.

Since that time, Williams has continued his solo career, touring the US, Europe and South Africa, and has recently shared stages with Aretha Franklin, The Whispers, Rick James, Boney James, Bobby Womack, Ohio Players, Al Green, Usher, K-Ci & JoJo, Alicia Keys, Anthony Hamilton and Frankie Beverly & Maze. He has also expanded his career to include acting, starring in several stage plays, including Love On Lay Away starring Deborah Cox, Mel Jackson and Martha Wash, What Men Don't Tell starring Kenny Latimore, Shante Moore, and Dottie Peoples, and When A Woman's Fed Up.

This article uses material from the article Lenny Williams from the free encyclopedia Wikipedia and it is licensed under the GNU Free Documentation License.