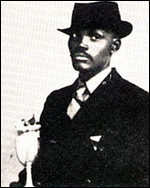 Solomon Popoli Linda (1909 – 8 October 1962), also known as Solomon Ntsele ("Linda" was his clan name),[1] was a South African Zulu musician, singer and composer who wrote the song "Mbube" which later became the popular music success "The Lion Sleeps Tonight", and gave its name to the Mbube style of isicathamiya a cappella popularized later by Ladysmith Black Mambazo.[2]

Solomon Popoli Linda was born near Pomeroy, on the labor reserve Msinga, Umzinyathi District Municipality in Ladysmith in Natal, where he was familiar with the traditions of amahubo and izingoma zomtshado (wedding songs) music.[2][3][4] He attended the Gordon Memorial mission school where he learned somewhat about Western musical culture, hymns, and choir contests in which he participated.[2][3] Influenced by the new syncopated music that had been introduced into South Africa from the US during the 1880s, he included it in the Zulu songs he and his friends sang at weddings and feasts.[5][6]

In 1931, Linda, like many other young African men of those times, left his homestead to find menial work in Johannesburg, by then a sprawling gold-mining town with a great demand for cheap labour. He worked in the Mayi Mayi Furniture Shop on Small Street and sang in a choir, known as the Evening Birds, managed by his uncles, Solomon and Amon Madondo, and which disbanded in 1933.[7]

Linda found employment at Johannesburg's Carlton Hotel and started a new group that retained the Evening Birds name. The members of the group were Solomon Linda (soprano), Gilbert Madondo (alto), Boy Sibiya (tenor), with Gideon Mkhize, Samuel Mlangeni, and Owen Sikhakhane as basses. They were all Linda's friends from Pomeroy.[2][3][7]

After Linda started working at the Gallo Record Company's Roodepoort plant in 1939 as a record packer,[8] the Evening Birds were witnessed by company talent scout Griffith Motsieloa.[2] Italian immigrant Eric Gallo owned what at that time was sub-Saharan Africa's only recording studio. In 1939, while recording a number of songs in the studio, Linda improvised the song "Mbube" (Lion).[3] "Mbube" was a major success for Linda and the Evening Birds, reportedly selling more than 100,000 copies in South Africa by 1949. The recording was produced by Motsieloa at the Gallo Recording Studios, in Johannesburg. Linda sold the rights to Gallo Record Company for 10 shillings (less than USD 2) soon after the recording was made. However, it is alleged that, by British laws then in effect, those rights should have reverted to Linda's heirs 25 years after his death in 1962.[1][6]

In 1948, the Evening Birds disbanded, and a year later Linda married Regina. While raising a family he continued to perform. His song "Mbube" had made him well known in South Africa.

Linda is credited with a number of musical innovations that came to dominate the isicathamiya style. Instead of using one singer per voice part, the Evening Birds used a number of bass singers. He introduced the falsetto main voice which incorporated female vocal texture into male singing. His group was the first known to use striped suits to indicate that they were urban sophisticates. At the same time, their bass singing retained some musical elements that indicated traditional choral music.[2]

Some of Linda's music can be interpreted as expressing political dissent. For example, "Yetulisgqoko" ("Take off your hat", Gallo GE 887) recalls treatment by Pass Office officials, and ends with the words "Sikhalela izwe lakithi" ("We mourn for our country"). Such expressions were an occasional feature of Mbube songs. Groups like The Alexandrians were associated with the Industrial and Commercial Workers Union in Johannesburg.[2]

The original South African recording was discovered during the early 1950s by American musicologist Alan Lomax, who gave it to his friend, folk musician Pete Seeger of The Weavers. Seeger retitled it "Wimoweh" (an approximate phonetic rendering of the song's Zulu language refrain, "uyembube") and it was popularized by The Weavers; they recorded a studio version in 1952 which became a Top 20 hit in the USA, as well as an influential live version recorded at Carnegie Hall in 1955 and released in April, 1957. The Weavers' version was subsequently cover-versioned by The Kingston Trio in 1959.[6]

The Weavers' Carnegie Hall version was also the inspiration for the 1961 version recorded by popular music group The Tokens, for whom it was re-written extensively by George David Weiss and retitled "The Lion Sleeps Tonight"; this is the version with which most people are now familiar. (However, at the time, 1961-1962, a fast-tempo version by the Karl Denver Trio was the more successful in the UK).[9]

Despite the popularity and wide use of the song, Linda died impoverished in 1962 of renal failure. It was not until 18 years later that a tombstone was constructed at his gravesite.[10]

In 2000, South African journalist Rian Malan wrote a feature article for the magazine Rolling Stone, describing Linda's story and estimating that the song had earned US $15 million for its use in The Lion King alone. Malan and the South African filmmaker François Verster cooperated to make a television documentary named A Lion's Trail which tells Solomon Linda's story and was screened by PBS. In 2004, with the backing of the South African government and Gallo Records, Linda's descendants in South Africa sued The Walt Disney Company for its use in The Lion King movie and stage musical without paying royalties to them.[6][11]

In February 2006, Linda's heirs attained a legal settlement with Abilene Music company, which had the worldwide rights and had licensed the song to Disney. This settlement applies to worldwide rights, not just South African, since 1987. The money will go to a trust, to be administered by SA Music Rights CEO Nick Motsatsi.[12][13]

The primary outcomes of the settlement of February 2006 were:

This article uses material from the article Solomon Linda from the free encyclopedia Wikipedia and it is licensed under the GNU Free Documentation License.

Ho bisogno d'amore Paolo Meneguzzi
Update Required To play the media you will need to either update your browser to a recent version or update your Flash plugin.