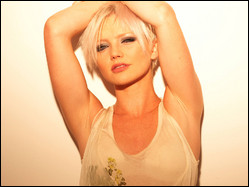 Hannah Louise Spearritt (born 1 April 1981)[1] is an English actress and singer. She is an original member of the pop group S Club 7 from 1999 until they split in 2003. In November 2014, the group announced plans for an arena reunion tour, Bring It All Back 2015, which toured the UK in May 2015.[2] Spearritt is also known for playing the role of Abby Maitland in the drama Primeval.

Spearritt was born in Great Yarmouth, Norfolk to Michael and Jenny Spearritt, growing up in nearby Gorleston-on-sea. She is the youngest of three children. Her sister is former model and fashion designer Tanya Spearritt. Her uncle, Eddie Spearritt, from Lowestoft was a professional football player who played for Ipswich Town in the 1960s.[3] At the age of three, she featured in a Mothercare catalogue.

When she was 12, Spearritt landed a part in the Lowestoft Players amateur dramatics society's production of Annie. Thereafter, she successfully auditioned for the National Youth Music Theatre, and became part of the company.[1] While with the NYMT she met future S Club member and boyfriend Paul Cattermole, as well as her friend and future flatmate, actress Sheridan Smith. She appeared in the NYMT's productions Pendragon (1994–95)—performing in New York and Hong Kong, Tin Pan Ali (1996), and the West End musical Bugsy Malone (1997).[1] In 1998, she got a role in the television film The Cater Street Hangman,[1] playing the role of a maid who gets murdered. Spearritt had also made appearances on the National Lottery Show and Blue Peter while studying mathematics, performing arts and media studies at college in Great Yarmouth.

The group S Club 7 rose to fame by starring in their own BBC television series, Miami 7, in 1999 and have been widely referred to as inspiring a new generation of teenage TV musicals including High School Musical and Glee. Over the five years they were together, S Club 7 had four UK No.1 singles, one UK No.1 album, a string of hits throughout Europe, including a top-ten single in the United States, Asia, Latin America, and Africa. They recorded a total of four studio albums, released eleven singles and went on to sell over fourteen million albums worldwide.[4] Their first album, S Club, had a strong 1990s pop sound, similar to many artists of their time. However, through the course of their career, their musical approach changed to a more dance and R&B sound which is heard mostly in their final album, Seeing Double. S Club 7 won two BRIT Awards—in 2000 for British breakthrough act and in 2002, for best British single. In 2001, the group earned the Record of the Year award. Group member Paul Cattermole departed the group in 2002, and the group changed its name from S Club 7 to simply S Club. On 21 April 2003, during a live onstage performance, S Club announced that they were to disband.[5]

In 2003, she was in Los Angeles to audition for a role in the film Agent Cody Banks 2: Destination London, a fact that she revealed at the UK premiere of the film on 24 March 2004 in London. She got the role and three days after leaving S Club, she began filming. In March 2004, Spearritt successfully auditioned for a minor role in the horror film Seed of Chucky, which was seen by some as an attempt to distance herself from her squeaky clean S Club image.[6] Shortly after completing filming, Spearritt decided to take a break from show-business to travel and spend time with her family. In early November 2005, she made her acting comeback in the BBC's Blessed, an eight-part sitcom. In Blessed, she played a minor role, appearing as a member of a fake girl band in two episodes. December 2005 saw Spearritt appearing in the unsuccessful West End musical, Snow! The Musical, at London's Sound Theatre. The musical was cancelled just three weeks into its run because of poor ticket sales - one show managed to attract an audience of only two people.[7]

In February 2006, it was revealed that Spearritt had landed a lead role in a brand new ITV series called Primeval. She plays the role of Abby Maitland, a reptile enthusiast who gets mixed up with time travelling Professor Nick Cutter (Douglas Henshall) after discovering a species of reptile she had never encountered. The series began on 10 February 2007. It paused for over three years before its fourth series aired on ITV in February 2011 with a group of new actors. Series five was viewed on Watch and was shown in early 2012 on ITV1. In late 2006, Spearritt began filming for ITV1, for a guest part in Agatha Christie's Marple television mystery series.[8] The episode, entitled "At Bertram's Hotel", was broadcast on 23 September 2007. In 2010 she made a cameo appearance in a short film, Bubble Wrapped produced by her partner.

In late 2011 she performed The Belle's Stratagem where she played the role of Lady Frances. In March 2012, Spearritt will take over the role of Pauline in a play called One Man, Two Guvnors in the Theatre Royal Haymarket.[9] She participated with S Club 7 in a reunion tour, titled Bring It All Back 2015, which toured the UK in May 2015. In December 2015, it was confirmed that Spearritt will star as Mercedes Christie in the BBC medical drama Casualty. Spearritt made her debut on 23 January 2016.[10] It was announced in October 2017 that Spearritt would join the cast of EastEnders for a guest stint as Kandice Taylor, the younger sister of established character Karen Taylor (Lorraine Stanley).[11]

This article uses material from the article Hannah Spearritt from the free encyclopedia Wikipedia and it is licensed under the GNU Free Documentation License.

Venus Shocking Blue
Update Required To play the media you will need to either update your browser to a recent version or update your Flash plugin.