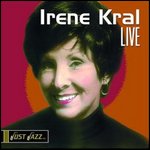 Irene joined Maynard Ferguson's band in the late 1950s and sang with groups led by Stan Kenton and Shelly Manne.

Irene then started a solo career until her death at 46 years of age. She was a ballad singer who stated that Carmen McRae was one of her inspirations.

Irene was made more famous posthumously when Clint Eastwood used her recordings in his 1995 movie, The Bridges of Madison County.

This article uses material from the article Irene Kral from the free encyclopedia Wikipedia and it is licensed under the GNU Free Documentation License.

Brotherlove Crimer
Update Required To play the media you will need to either update your browser to a recent version or update your Flash plugin.