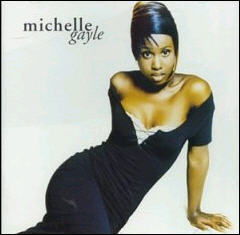 Michelle Patricia Gayle (born 2 February 1971) is a British recording artist, songwriter, actress and author. Gayle had success as a Soul and R&B singer in the 1990s. She achieved seven Top 40 singles in the UK Singles Chart, her two biggest hits to date being "Sweetness" (Number 4, September 1994) and "Do You Know" (Number 6, February 1997).[1] She released two Top 40 albums through RCA Records but they parted company in 1997, and although Gayle has recorded other albums, they have not been released.

As an actress, Gayle is best known for her work on television, in particular playing Hattie Tavernier in BBC's EastEnders from 1990-1993. She has also had various roles in film and theatre and played Belle in the West End musical Beauty and the Beast in 1999. She has taken part in several celebrity based reality television shows, and, in June 2007, she became a panellist for ITV's topical chatshow Loose Women.

Gayle branched into writing and the rights to her first novel were acquired by Walker Books in 2010. The book, Pride and Premiership, was published on 5 May 2011.[2]

She was married to ex-footballer Mark Bright for 10 years but the couple announced their separation in 2007.

Gayle was born in London, and attended the Barbara Speake stage school in Acton, west London, where Naomi Campbell, Amma Asante and Kwame Kwei-Armah were among her contemporaries.[3] She first became publicly known when she appeared in the children's BBC television programme Grange Hill in 1987 as Fiona Wilson, who was most notably part of a rap duo named Fresh 'n' Fly.[4]

Gayle later appeared as an extra in TV Drama London's Burning and in the Children's ITV television programme Press Gang in 1990 as a background member of the news team, and that same year she won the role of Hattie Tavernier in the popular BBC soap opera EastEnders. The introduction of the Tavernier family heralded the first time that an entire family had joined the programme all at once. Their introduction was also a well-intentioned attempt to portray a wider range of black characters than had previously been achieved on the show.[5] Gayle's character remained in the show for three years as Ian Beale's PA and was featured in an array of storylines including being abandoned by her fiancé Steve Elliot (Mark Monero) and suffering a miscarriage as a result. However, music was always Gayle's first passion, and in 1993 she left EastEnders to pursue a singing career.[6]

In 1999, Gayle played Belle, the lead female, in Disney's Beauty and the Beast, and she returned to television acting in 2003, guest-starring in the BBC television dramas Doctors and Holby City. She went on to play the role of Lara in the Five soap opera, Family Affairs (2005), and played the lead female character, Yvonne, in the film Joy Division, which was released in November 2006. The film tells the story of a German boy who is orphaned in World War II and then groomed as a KGB sleeper.

On stage, she played the role of Brenda in Angie Le Mar's The Brothers at the Hackney Empire in April 2006, and she went on to play Jill in Pat Ashworth's ensemble stage production, Mum's the Word, which toured the UK from February to June 2007.[7]

Gayle starred in Jason Barrett's British feature film The Naked Poet as character Joanne, which was screened in London's Mayfair Hotel December 2011, her performance was critically acclaimed as she brought a "mature and experienced" performance to the film.

Gayle was a contestant on ITV's reality-television show Reborn in the USA, competing against artists such as Elkie Brooks, Sonia, Gina G, Leee John and Tony Hadley. Gayle made it to the final and finished second behind Hadley. In 2004, Gayle presented the UMA Awards with ex-EastEnder Gary Beadle,[8] and in 2005, she appeared as a celebrity mentor on the Five documentary Pushy Parents.

In March 2006, she took part in the fourth series of the Channel 4 reality-television show The Games competing against various other celebrities in a series of sports events. Gayle came third in the competition and raised more than £5,000 for her chosen charity, the Willow Foundation.[9] She later became a guest panellist on ITV's topical chatshow Loose Women, in June 2007.

In June 2009, it was announced that Gayle would be one of several celebrities competing in Dancing on Wheels, BBC's spin-off show to the popular reality television competition Strictly Come Dancing. Dancing on Wheels paired able-bodied celebrities with those in wheelchairs. The winning pair represented the UK at the Wheelchair Dance Sport European Championships in Israel in October 2009.[10] Gayle and partner Harry Maule reached the semi-finals, but were knocked out in the dance-off by Diana Morgan-Hill and Olympic swimmer Mark Foster.

Before she gained commercial success, Gayle sang with a rap duo called R-MOR-FUS, performing gigs at various clubs and low-key venues.[11] In 1993, while she was still on the cast of EastEnders, Gayle signed with RCA Records and launched herself as a solo artist. She scored a number 11 hit with her debut single "Looking Up". By 1994, she had her biggest-selling single to date, "Sweetness", which reached number 4,[12] spent 16 weeks in the UK Singles Chart and was certified silver, selling more than 300,000 copies. Gayle had further chart success in 1994 with the number-26 hit "I'll Find You"; in 1995 with the number-16 "Freedom"; and the number-11 "Happy Just to Be With You" which sampled Chic's Good Times. These five singles were taken from Gayle's self-titled debut album Michelle Gayle, which was released in 1994, peaked at number 30 in the UK Albums Chart, and was certified gold.

Gayle returned in 1997 with her sixth single, "Do You Know", which reached number 6.[12] This was followed by the song "Sensational", which reached number 14. Both singles were taken from Gayle's second album, Sensational. Despite Sensational being praised by critics, the album had disappointing sales. It entered the album chart at number 17, but quickly fell out of the top 40 the following week. Due to her second album selling way below Gayle's (and her record label's) expectations, she decided to leave her label, RCA. While signed to the label, Gayle received three BRIT Award nominations: two in 1995 for 'Best Single' and 'Best Female', and one in 1998 for 'Best Female'.

Following her departure from RCA, Gayle quickly signed with EMI, and recorded an album for that label, but due to an artist rostering re-shuffle, she parted company in 1999 before the album was released. After leaving EMI in 1999, Gayle took to the West End stage and played Belle in Disney's Beauty and the Beast. After an extended break from showbusiness to look after her son, Isaiah, Gayle began developing her music production company M Media Productions.[14] She also appeared on other artists' albums, including that of Ivan Matias, Me One, Shabba and Lemon D.[15]

In 2003, Gayle accepted the offer to appear in the reality television series Reborn in the USA, a televised singing competition where former British pop acts were transported to the USA, with the hope of revitalising their music careers. Gayle finished second in the competition, taking runner-up position to Tony Hadley in the final. Following her success on the programme, Gayle began working on new material.[16]

Gayle reinvented herself as a UK R&B artist,[12] and worked on material for her third album with New York record producer Terence Dudley famous for working on 50 Cent's album Get Rich or Die Tryin'.[14] At the end of 2004, Gayle appeared on several TV shows promoting the release of her new single, "Gotta Be Me", but the single was pulled before its release. In an interview with The Voice newspaper in April 2006, Michelle divulged that she did make a new album, but her record company (N2 Records) folded.[17]

Gayle was one of the participants of the pre-selection stage of Eurovision Your Decision, which determined who the United Kingdom would send to the Eurovision Song Contest in Serbia on 24 May 2008. Gayle co-wrote her song, "Woo (U Make Me)", with Rashelle Davies and Morten Schjolin, and described it as "pop in essence, but with a very cool 60's vibe to it".[18] Gayle came second in the public vote on 1 March 2008, behind Andy Abraham.

During an interview with the Blackpool Gazette in February 2007, Gayle mentioned that she was in the process of writing her first novel. The plot involved an unpleasant TV talent-show judge who discovers he is dying. She said: "It's sort of fiction but not fiction and I hope it explains a few things about the pop business.".[19] It was never published.

Walker Books acquired the rights to Gayle's novel, Pride and Premiership, in 2010 and the book was published on 5 May 2011.[20] The novel, aimed at a teen market, depicts the story of two girls who aspire to be WAGs, or wives/girlfriends of football players. Gayle, who was once married to a professional footballer, has commented, "In the time of Jane Austens Pride & Prejudice a woman had to get married to support herself. Weve got to an age where a woman can support herself but still wants to marry a footballer to support her. Im not WAG-bashing or footballer-bashing, I just want girls to make informed decisions about their future."[21]

Gayle was married to ex-professional footballer and football pundit Mark Bright[22] for 10 years, and had one son, Isaiah, with him. On 24 February 2007, it was announced that the couple were to split in an apparently amicable separation.[23] They officially divorced on 18 April 2008. Gayle is godmother to the daughter of the actress Jacqui Gordon-Lawrence, who played her on-screen mother, Etta Tavernier, in EastEnders.[16] Gayle is a teetotaller[24] and doesn't eat meat.[25] Gayle is to remarry in "summer 2011".[26] On 4 August 2011 it was announced on The Wright Stuff, C5 that she is 6½ months pregnant. On Twitter, she announced the birth of her son, Luke, on 2 November 2011.

B-sides and other tracks

This article uses material from the article Michelle Gayle from the free encyclopedia Wikipedia and it is licensed under the GNU Free Documentation License.

Take Another Day 2Another
Update Required To play the media you will need to either update your browser to a recent version or update your Flash plugin.