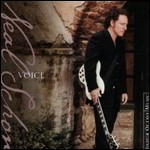 Neal Joseph Schon (born February 27, 1954)[1] is an American rock guitarist, songwriter, and vocalist, best known for his work with the bands Journey and Bad English. He is Journey's last original constant member, having participated in every album and tour to date. He was a member of the rock band Santana before forming Journey, and was also an original member of Hardline.

Neal Joseph Schon was born at Tinker Air Force Base, Oklahoma, the son of Matthew and Barbara Schon.[4] He is of German ancestry.[5][6] Schon first picked up the guitar at "around the age of five."[4] A quick learner, he joined Santana as a teenager at 15.[4] Schon has said he was asked by Eric Clapton to join Derek and the Dominos,[4] but that he joined Santana instead, performing on the albums Santana III and Caravanserai. Schon also played in Azteca before moving on in 1973 to form Journey, a group he has continued to lead to the present day.

Schon's guitar style has been described as soulful, taking inspiration from 1960s-era soul singers such as Aretha Franklin and Gladys Knight, and blending it with blues runs similar to B. B. King. He was influenced by guitarists such as Eric Clapton, Jimi Hendrix, Carlos Santana and Wes Montgomery.

In addition to his five solo albums and 14 studio albums with Journey, his work also includes: a pair of albums with keyboardist Jan Hammer, short-term collaborations with Sammy Hagar (HSAS and Planet Us) and Paul Rodgers, stints with Bad English (a supergroup that featured Journey’s Jonathan Cain and Deen Castronovo and Jonathan Cain's former Babys bandmates John Waite and Ricky Phillips) and Hardline (which also featured Deen Castronovo). Even as Journey’s latest lineup plays to a still-faithful body of fans, Schon has immersed himself in side projects such as Piranha Blues (1999) and "Black Soup Cracker" a funk outfit that features former Prince associates Rosie Gaines and Michael Bland, and more recently Soul SirkUS with Jeff Scott Soto.

Schon can be heard on other albums including three tracks on Michael Bolton's The Hunger, with the Schon sound most recognizable on "(Sittin' On) The Dock of the Bay". He also joined Larry Graham to play in an all-star band for cult funk artist and ex-wife of Miles Davis, Betty Davis. In addition, Schon (along with then Journey manager Herbie Herbert) also contributed to Lenny White's 1977 album Big City, specifically the instrumental jam "And We Meet Again".

Schon's first guitar was an acoustic Stella, followed two years later by a Gibson ES-335. When the 335 was stolen, he replaced it with a '56 Les Paul Goldtop reissue that he used for many years.[7][8] Schon has used Gibson guitars over the years, and had a limited edition signature Les Paul model called the Neal Schon Signature Model Custom Les Paul, of which Gibson made only 35, according to the Gibson Custom website (80 according to Neal Schon's website).[7] He has previously employed Godin guitars on his 1995 solo album Beyond the Thunder, and more recently uses Paul Reed Smith guitars. In the late 1980s, Schon manufactured (through Jackson Guitars and later Larrivee) and played his own line of guitars. Simply named Schon, about 200 of the Jackson-produced models were made.[9] A white Schon guitar can be clearly seen in the music video for the Journey song "Girl Can't Help It", as well as a gold version in the Journey videos for "I'll Be Alright Without You" and "Be Good to Yourself". A Gibson Les Paul Super Custom can be seen in the video for the Journey song "Any Way You Want It". Recently he has been seen using a Seven String Ibanez Universe, which was a gift from Steve Vai as documented in the liner notes of the Hardline - Double Eclipse album.[10] On the song "Lights", he uses a Fender Stratocaster later equipped with a Floyd Rose tremolo.

In a 2007 interview, Neal confirmed that he has had tinnitus for years stemming from excessive loud playing.[12] Schon's father, Matthew Schon, was a jazz musician and composer who provided the arrangements on the Journey song "Mother, Father."

Currently, Neal uses Paul Reed Smith guitars, and has two signature models with the "NS" prefix. The NS-14 and NS-15.

In September 2011, Schon publicly confirmed he was in a relationship with Michaele Salahi, who had previously crashed a White House state dinner, starred in Bravo’s Real Housewives and abruptly left husband Tareq Salahi to take up with Schon. The two said they had also dated years previously in the 1990s and were very happy together.[14][15]

On October 14, 2012, Schon proposed to Michaele onstage during a charity concert at the Lyric Opera House in Baltimore, Maryland, offering her an oval 11.42 carat diamond engagement ring.[16] The marriage would be Schon's fifth and Michaele's second.[17]

The couple married on December 15, 2013, in a pay-per-view ($14.95 for three hours) wedding that was broadcast live from the Palace of Fine Arts in San Francisco, California.[18] On December 1, 2015, the San Francisco Board of Supervisors agreed to a settlement that would pay Neal and Michaele $290,000 in response to a lawsuit that had accused the city-county government of improperly permitting the wedding's organizers to increase their fees after learning of the pay-per-view arrangements.[19]

This article uses material from the article Neal Schon from the free encyclopedia Wikipedia and it is licensed under the GNU Free Documentation License.

Sunnesite Henä
Update Required To play the media you will need to either update your browser to a recent version or update your Flash plugin.