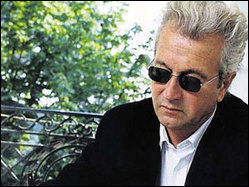 Luc Plamondon, OC, CQ (b. March 2, 1942 in Saint-Raymond, Quebec), is a French-Canadian lyricist[1] and music executive. He is best known for his work on the musicals Starmania and Notre-Dame de Paris.

He is the brother of Louis Plamondon, a long-serving member of the House of Commons of Canada.[2]

Plamondon has accepted honours from Canadian institutions and is also known as a francophone nationalist and Quebec sovereigntist. He is opposed to Internet music piracy.

The 1970s: first collaborations and Starmania

Luc Plamondon was born and raised on his father's farm, 50 km northwest of Quebec City in the small rural community of Saint-Raymond-de-Portneuf.[3]

Plamondon’s arts education began at a young age. He learned the piano and undertook classical studies at the Petit Séminaire de Québec.

During his university years, Plamondon wrote musicals and plays. He completed a bachelor's degree in teaching in Quebec. He also pursued literature studies at the Université de Montréal; art history at the Louvre in Paris; and language studies in England, Germany, Spain, and Italy. He also attended a seminary, and later said that he went into it to become a priest and left it a poet.[4] After seeing Hair on Broadway and Three-Penny Opera,[3] Plamondon realized that the musical genre was to be his vocation.

His first success, in 1970, was the song "Les Chemins d’été" (better known to the public as "Dans ma Camaro" because of the first line of its chorus). The music for the song was written by André Gagnon, and it was performed by the singer Steve Fiset, a celebrity at the time.

Following this, in 1972, Plamondon worked with four Quebecois singers: Emmanuëlle, Monique Leyrac, Renée Claude et Diane Dufresne. He wrote the lyrics for several songs by the first two, and penned a complete album each for Claude (Je reprends mon souffle) and Dufresne (Tiens-toé ben, j’arrive) He continued to write lyrics for Dufresne until 1984 and for Claude until 2006.

In 1976, Plamondon began collaborating with the composer Michel Berger on the rock opera Starmania. The ambitious project, billed as the first French rock opera, was released on vinyl in the fall of 1978 with the cooperation of both European French artists (Gall, Balavoine) and Canadian French artists (Dufresne, Thibeault, Dubois).

Over the years, Starmania saw several stage productions (Paris in 1979 and 1988, Montreal in 1980 and 1987). Some of the songs from Starmania, such as "Le Blues du businessman" and "Le Monde est stone", have had a lasting success and are considered classics today.

In the 1980s, Plamondon cowrote songs for the double album Lily Passion with Barbara. He also cowrote the risqué song "Call-girl" with Germain Gauthier; the song was performed by Nanette Workman and enjoyed great success in Quebec.lily

In 1983, at the ADISQ gala, Plamondon accepted a joint award with Robert Charlebois for the song "J’t’aime comme un fou". During his acceptance speech, he sparked a controversy when he made a scathing attack on the attitude of certain figures in the industry concerning copyright law.

In 1985, he gave the use of his villa on the shore of Lake Magog to Denys Arcand to be used in the shooting of his film Le Déclin de l’empire américain.[5]

In 1990, a stage production of La Légende de Jimmy, with music written by Michel Berger, ran for six months in Paris at the Théâtre Mogador before being staged again in Montreal and Quebec City. However, it enjoyed significantly less success than Starmania had.

A new version of Starmania was produced on October 1, 1993 at the Mogador, directed by Lewis Furey. Performers Judith Bérard, Michel Pascal, Patsy Gallant, Isabelle Boulay, Bruno Pelletier, Luce Dufault and others toured in France, Belgium, and Switzerland. The production won a Félix Award in 1994 and a Victoire Musical of the Year Award in 1995.[6] An album entitled Starmania, Mogador 94 was released,[7] went platinum[8] after selling 500,000 copies,[6] and included the single "Quand on n’a plus rien à perdre" featuring Bruno Pelletier.[9] · [10]

In the spring of 1995, Guy Cloutier and his team presented a compilation of songs dedicated to Plamondon (the content of which was chosen by the Quebecois radio network RockDétente). The compilation comprised two CDs and was called Les grandes chansons de Luc Plamondon – 25 ans de succès, 25 chansons.

In September 1998, Plamondon wrote the lyrics to Riccardo Cocciante’s music for the musical Notre-Dame de Paris, which was first staged in the Palais des congrès de Paris. The show enjoyed great success and was subsequently staged in Quebec, and then appeared in English translation in London. Several years later, it was remounted at the Mogador.

The 2000s and beyond: Cindy, renewed collaborations, and retirement

Plamondon wrote the lyrics for the 2002 musical Cindy, a modern adaptation of the fable of Cinderella. The composer was Romano Musumarra. The album was released on February 26 and debuted at number 24 on the French charts and number 17 in francophone Belgium.[11] Despite the album having gone gold[12] with over 200,000 copies sold and a large promotion,[13] the show’s producer acknowledged that the production was a commercial failure, and it ended after a few months.[14]

In January 2006, Plamondon decided to mount a new production of Notre-Dame de Paris with new artists in the same theatre where it had had its debut.

In 2012, Plamondon returned to the fore when he collaborated once more with Céline Dion on the album Sans attendre, which was released on November 2. He wrote the lyrics for the song "Rien que toi", which became "Que toi au monde", with music by Davide Esposito. It had been some twenty years since Plamondon and Dion had last worked together.

Luc Plamondon lived for five years at the turn of the millennium in Ireland,[17] and now divides his time between the two cities in which he has an apartment: Montreux in Romandy (where he presides over the Freddie Mercury Live Music Awards),[18] and Paris, where his home is near the Eiffel Tower and has a view of the Champ de Mars. He spends each winter in Florida.[19]

This article uses material from the article Luc Plamondon from the free encyclopedia Wikipedia and it is licensed under the GNU Free Documentation License.

Mañana Álvaro Soler feat. Cali Y El Dandee
Update Required To play the media you will need to either update your browser to a recent version or update your Flash plugin.