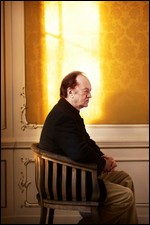 Nikolaus Harnoncourt (Johann Nikolaus Graf [Count] de la Fontaine und d’Harnoncourt-Unverzagt; 6 December 1929 – 5 March 2016) was an Austrian conductor, particularly known for his historically informed performances of music from the Classical era and earlier. Starting out as a classical cellist, he founded his own period instrument ensemble, Concentus Musicus Wien, in the 1950s, and became a pioneer of the Early Music movement. Around 1970, Harnoncourt started to conduct opera and concert performances, soon leading renowned international symphony orchestras, and appearing at leading concert halls, operatic venues and festivals. His repertoire then widened to include composers of the 19th and 20th centuries. In 2001 and 2003, he conducted the Vienna New Year's Concert. Harnoncourt was also the author of several books, mostly on subjects of performance history and musical aesthetics.

Harnoncourt was born Johann Nikolaus Graf de la Fontaine und d’Harnoncourt-Unverzagt[2] in Berlin, Germany. His mother, Ladislaja Gräfin von Meran, Freiin von Brandhoven, was the great-granddaughter of the Habsburg Archduke Johann, the 13th child of the Emperor Leopold II, making him a descendant of various Holy Roman Emperors and other European royalty. His father, Eberhard de la Fontaine Graf d'Harnoncourt-Unverzagt, was an engineer working in Berlin who had two children from a previous marriage. Two years after Nikolaus's birth, his brother Philipp was born. The family eventually moved to Graz, where Eberhard had obtained a post in the state government (Landesregierung) of Styria.

Harnoncourt was raised in Graz, Austria, and studied music in Vienna. During his youth, he served in the Hitler Youth under duress, where, as he noted:[3]

If you didn't go there every Wednesday and Saturday, the Hitler Youth police would come, fetch you, cut your hair and toss you into a group with other difficult ones who were treated terribly.

Harnoncourt was a cellist with the Vienna Symphony from 1952 to 1969. In 1953, he founded the period-instrument ensemble Concentus Musicus Wien with his wife, Alice Hoffelner, whom he married that year.[1] The Concentus Musicus Wien was dedicated to performances on period instruments, and by the 1970s his work with it had made him quite well known. He played the viola da gamba at this time, as well as the cello. For the Telefunken (later Teldec) label, Harnoncourt recorded a wide variety of the Baroque repertoire, beginning with the viol music of Henry Purcell,[4] and extending to include works like Bach's The Musical Offering,[5] Monteverdi's L'incoronazione di Poppea,[6] and Rameau's Castor et Pollux.[7] One of his final recordings with the Concentus Musicus Wien was of Beethoven's Symphonies Nos. 4 and 5.[8]

One reason that Harnoncourt left the Vienna Symphony was to become a conductor. He made his conducting debut at La Scala, Milan, in 1970, leading a production of Monteverdi's Il ritorno d'Ulisse in patria.[9]

In 1971, Harnoncourt started a joint project with conductor Gustav Leonhardt to record all of J. S. Bach's cantatas. The Teldec Bach cantata project was eventually completed in 1990 and was the only cantata cycle to use an all-male choir and soloist roster, with the exception of cantatas nos. 51 and 199, which were intended for a female soprano voice. He also made the first recordings in historically informed performance of Bach's Mass in B minor (1968) and St Matthew Passion (1970). In 2001 a critically acclaimed and Grammy Award winning recording of the St Matthew Passion with the Arnold Schoenberg Choir was released, which included the entire score of the piece in Bach's own hand on a CD-ROM. This was his third recording of the work.[10]

Harnoncourt later performed with many other orchestras that played on modern instruments, but still with an eye on historical authenticity in terms of tempi and dynamics, among other things. He also expanded his repertoire, continuing to play the baroque works, but also championing the Viennese operetta repertoire. He made a benchmark recording of Beethoven's symphonies with the Chamber Orchestra of Europe (COE),[11] and recorded Beethoven's piano concertos with Pierre-Laurent Aimard and the COE.[12]

In 1992, Harnoncourt debuted at the Salzburg Festival conducting a concert with the Chamber Orchestra of Europe. In the following years, he led several concerts with the Chamber Orchestra of Europe, the Vienna Philharmonic and the Concentus Musicus. Harnoncourt also served as the conductor for major opera productions of the Festival: L'incoronazione di Poppea (1993), Mozart's Le nozze di Figaro (1995 and 2006), Don Giovanni (2002, marking also Anna Netrebko's international breakthrough as Donna Anna, and 2003) and La clemenza di Tito (2003 and 2006), and Purcell's King Arthur (2004).[16] In 2012, Harnoncourt conducted a new production of Die Zauberflöte staged by Jens-Daniel Herzog.[17]

Harnoncourt made his guest-conducting debut with the Concertgebouw Orchestra, Amsterdam, in 1975. He continued as a guest conductor with the orchestra, including in several opera productions and recordings.[18] In October 2000, the Royal Concertgebouw Orchestra (KCO) named him their Honorair gastdirigent (Honorary Guest Conductor). His final appearance with the KCO was in October 2013, leading Bruckner's Symphony No. 5.

Other recordings outside of the baroque and classical era repertoire included his 2002 recording of Bruckner's Symphony No. 9 with the Vienna Philharmonic. An accompanying second CD contained a lecture by Harnoncourt about the symphony with musical examples, including the rarely heard fragments from the unfinished finale. In 2009, Harnoncourt recorded Gershwin's Porgy and Bess, taken from live performances at Graz.

On 5 December 2015, one day before his 86th birthday, Harnoncourt announced his retirement via his website. "My bodily strength requires me to cancel my future plans," he wrote in a hand-written letter inserted into the program on his 86th birthday of a concert by the Concentus Musicus Wien.[19]

Harnoncourt was the focus of the annual festival of classical music Styriarte, founded in 1985 to tie him closer to his hometown Graz. He programmed the festival for 31 years. Events have been held at different venues in Graz and in the surrounding region.[20]

Harnoncourt met his wife Alice through their mutual interest in historically informed performances of Baroque music and co-founded the Concentus Musicus Wien.[1] Their daughter is the mezzo-soprano Elisabeth von Magnus. Their two surviving sons are Philipp and Franz. Their third son Eberhard, a violin maker, died in 1990 in an automobile accident.[21]

Harnoncourt died on 5 March 2016 in the village of Sankt Georgen im Attergau, north east of Salzburg.[22] His widow Alice, their three adult children, seven grandchildren, and three great-grandchildren survive him.

Harnoncourt was a member of the Royal Swedish Academy of Music,[30] Honorary Doctor of the University of Edinburgh[30] and of the Order Pour le Mérite for Science and Art.[30]

This article uses material from the article Nikolaus Harnoncourt from the free encyclopedia Wikipedia and it is licensed under the GNU Free Documentation License.

Dalmatiner Vollmondnacht Adrian Stern
Update Required To play the media you will need to either update your browser to a recent version or update your Flash plugin.